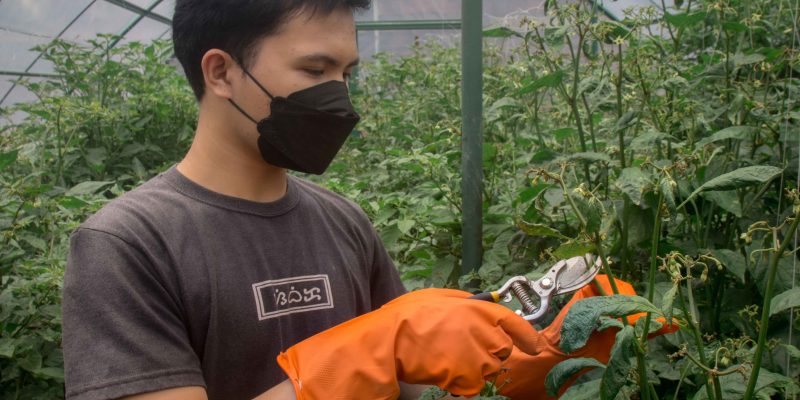 FarmJuan taught JM, the youngest caretaker in the farm, how to take care of the greenhouse. (Jerome Sagcal)

Before venturing into farming, Martin Jordana and his family knew nothing about agriculture. Martin and his siblings grew up in Las Piñas, so they were not exposed to farm life.

When Martin’s dad died in 2016, they were left with a three hectare piece of land in Indang, Cavite that was mostly used for their trailer management company. Half of the land was reserved for his dad’s game cocks as his dad enjoyed cockfighting. Martin and his siblings were not into the same hobby, so they saw that a big portion of the land was not being used to its full potential.

He posted on a Facebook Page for business startup enthusiasts stating that he wanted to build  a farm. Martin wrote that they wanted to grow chili peppers because they have limited land. Their land was actually huge, but Martin knew it was not enough to produce large quantities for commercial production. Because of this, Martin knew that he wanted to connect with a smart farming consultant so they could utilize the land as much as possible.

This is how they got in contact with an agricultural consultancy firm, which guided them throughout the process of creating a farming business.

Around this time, Martin talked with the owner of an online marketplace that connects consumers with farmers. Its owner told Martin that the habanero was a hot commodity and that it sold for a high price. This fit well with Martin’s plan because even though they had limited land, they could make it up by selling a high-value crop. Though not many in the Philippines are familiar with habaneros, Martin said that there is a market for this niche product particularly among hot sauce enthusiasts and restaurants.

With a business in mind, what they needed next was the actual know-how which FarmJuan guided them with.

Getting their feet wet in agriculture

The Jordana family named the farm Granja Jordana. Granja is Spanish for farm, which is meant to allude to their Spanish roots.

With the help of the farm consultant, the family built their first greenhouse which was completed in November 2021. It was 5 by 20 meters and housed three varieties of habaneros. They had Lengai RZ F1, a red slightly blocky habanero; Afadja RZ F1, a red oval-shaped habanero; and the Loleza RZ F1, a yellow blocky habanero.

A licensed agriculturist from the same consultancy firm assisted Martin all throughout the planting process, and continues to guide them until now. They taught Martin and his caretakers everything they needed to know about growing habaneros and even implemented rules that must be followed on the farm.

Even with a consultant to guide the Jordana family, the unexpected always happens when running a business. One of the earliest obstacles they had to overcome was an aphid infestation. Martin wanted to grow their habaneros organically, but he was forced to use chemical pesticides as a last resort for pest control.

Martin and his caretakers have since started practicing biological pest control methods such as by planting marigolds as trap crops, which are sacrificial crops planted to keep pests away from a main crop. The marigolds are planted outside the greenhouse so that pests don’t go directly for the habaneros. Martin plans to return to natural farming once they have recovered from the pest issue.

The Jordana family made their first harvest in February 2022 and are now able to produce one kilo per week. This is still far from Martin’s target to produce 20 kilos a week in order to sell wholesale to pepper processors, chili enthusiasts, restaurants, and online marketplaces.

To preserve the shelf life of their chilis, they have started experimenting on how to process their produce through pickling and sun-drying. He has also developed a hot sauce using their habaneros through the help of his cousin who is a chef.

Right now, they are taking advantage of the early stage of their business to improve their farming methods and upgrade facilities and equipment. Martin said that he is satisfied with the quality of their habaneros, so their aim now is to improve their yield. To accomplish this, Martin wants to build three more greenhouses, as well as utilize their open field.

Though still early in the game, Martin has a lot of plans for the farm. They plan to implement smart farming features such as a moisture monitoring and automatic watering system. Once the farm has been fully developed, he also envisions that part of the farm can be used as an agri-tourism site.

“I want farming to look cool again,” Martin said. “Because there’s not much young farmers—but there should be. I think with young farmers comes innovation. After seeing innovators… it’s inspirational. So I would love to be part of that even at a small capacity.”

Photos by Jerome Sagcal and courtesy of Martin Jordana.