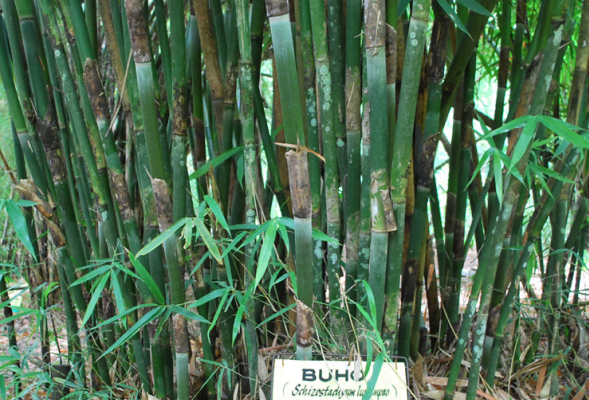 The use of buho (Schizostachyum lumampao) is central to Aeta cuisine. (DENR - ERDB)

Technological advancements in food and agriculture have forever changed the way people eat, but high up in the mountains of Zambales, traditional food practices thrive strong among the Aetas.

Central to Aeta cuisine is the use of an indigenous bamboo called buho  (Schizostachyum lumampao). As Aetas usually have no access to cookware like pans and pots, they use the bamboo’s culm or woody stem to hold their food as it goes into fire.

A handbook on erect bamboo species published by the Department of Environment and Natural Resources (DENR) describes buho as a “densely-tufted, clump-forming bamboo.” They grow 10-15m in length and expand to 4-8cm in diameter, with a culm of around 4-10mm.

Aetas harvest buho from elevated wet parts of the mountains. It is sawn off and cleaned in a river before it is used for cooking.

Cooking food inside buho infuses the food with a taste of bamboo, which is why buho has become a common material for cooking rice and different Aeta dishes.

To cook rice, it is first rinsed and then stuffed inside a culm of buho. A proportional amount of water is placed inside the buho culm before it is covered with banana leaves. The culm is then placed directly on the fire to cook for a few minutes.

Aetas also grow various root crops like taro. When rice is scarce, Aetas turn to taro to feed their tribes. Like rice, taro is simply stuffed inside a buho and placed on the fire.

Buho is also used to cook animal meat like snails and fish. Aetas hand-catch these animals in the shallow part of rivers. After the meat is cleaned, it is stuffed inside the buho with ginger added for a tangy flavor.

Buho is also used for various purposes outside cuisine. It is used for making fences, spears, flutes, and baskets and other handicrafts. It is also used to make sawali, a term used in northern Luzon to describe a woven matting made from strips of bamboo  commonly used as wall paneling for houses.

Buho is found in other parts of the country, growing in neighboring provinces of the Ilocos Region, as well as Leyte, Panay, and Basilan.

Screenshots and information provided here is taken from a video prepared by the ATI titled “Buhay Ha Tag-ay: Hapag at Kultura ng mga Kapatid na Aeta”. The video was part of their webinar series for Filipino Food Month 2022.

Additional screenshots and research were taken from a handbook on erect bamboo species published by the DENR – ERDB.