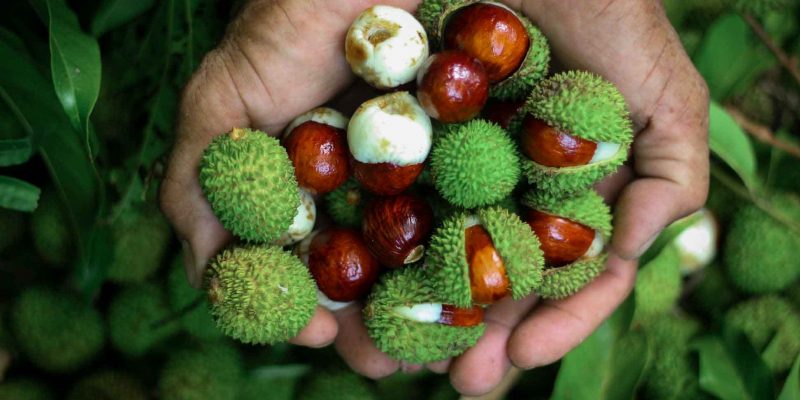 Theresita Payumo, a resident of Pakil, Laguna, recalled how her grandfather used to sell native “chestnuts” called ibuli (Cubilia cubili) when she was younger. They sold ibuli in sacks to a Chinese man who resold the fruits to Metro Manila.

She remembered this while feeling regretful as she was not always interested in ibuli as a kid. This has changed though. As the current agriculture officer of Pakil, Laguna, she now has a renewed passion for ibuli.

Longing for the past when ibuli were still plentiful, and motivated by the present need to preserve it, Theresita is now among the leading forces in her town working to repopularize this native “chestnut.”

Though Pakil residents compare ibuli to the chestnut, the plant is more related to lychee (Litchi chinensis) and rambutan (Nephelium lappaceum), as they all belong to the family Sapindaceae. This is in contrast with talakatak (Castanopsis philippinensis), or Philippine chestnut, which belongs to the family Fagaceae. This family includes beeches, chestnuts, and oaks.

According to Flora Malesiana, an international botanical project aiming to identify vascular plants in the Malesia region (Malaysia, Indonesia, Philippines), the ibuli tree can grow up to 25-50m in height. Its trunk can expand up to 75cm in diameters at breast height with its buttresses, or its large above-surface roots, sprawling up to 6m.

Its fruit grows up to 3-5cm by 2-2.5cm, with its skin color ranging from brown to green. Like a jackfruit, its skin has triangular protrusions up to 2mm long. Once the fruit is ripe, the skin will crack, revealing a seed covered in a 0.8mm thick white endocarp that usually only covers half of the seed, thus resembling a crown. This can be eaten, with residents of Pakil saying that it is sweet, but nauseating when eaten in large amounts. 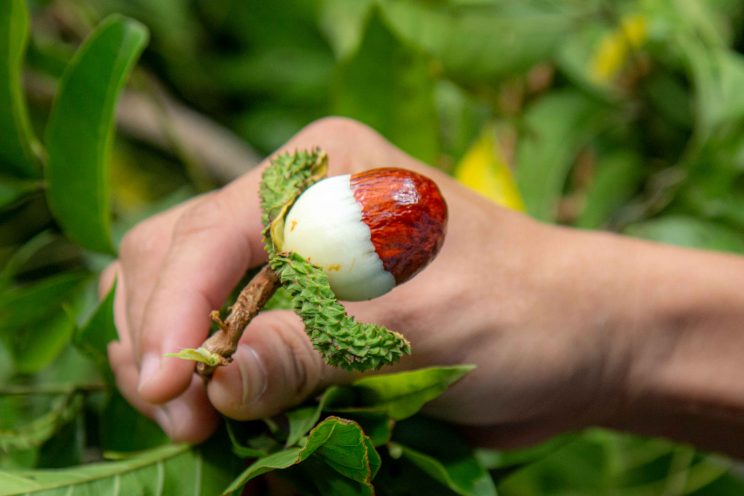 When ibuli is ripe, its skin will crack and eventually open revealing a brown shiny seed layered with a white endocarp. (Jerome Sagcal)

The seed, which is edible, can be ellipsoid to ovoid in shape, grows up to 2.5cm by 1.7cm, and is layered with a shiny brown coating.

Ibuli is in season from April to June, which coincides with the Turumba Festival, a festival to commemorate Our Lady of Sorrows of Turumba whose painting was found on Pakil’s shore in the 18th century. The fruit has been historically sold during the festival, which is the longest festival in the Philippines as it starts on the Friday before Palm Sunday and ends on Pentecost Sunday, or the 50th day after Easter Sunday.

During this season, local farmer and fisherman Roy Maulawin climbs Sierra Madre to harvest ibuli in a kaingin, a local term used to describe a privately-owned but loosely guarded agro-forest. The kaingin is owned by Theresita’s family and is located in Sitio Siki at Barangay Rizal. 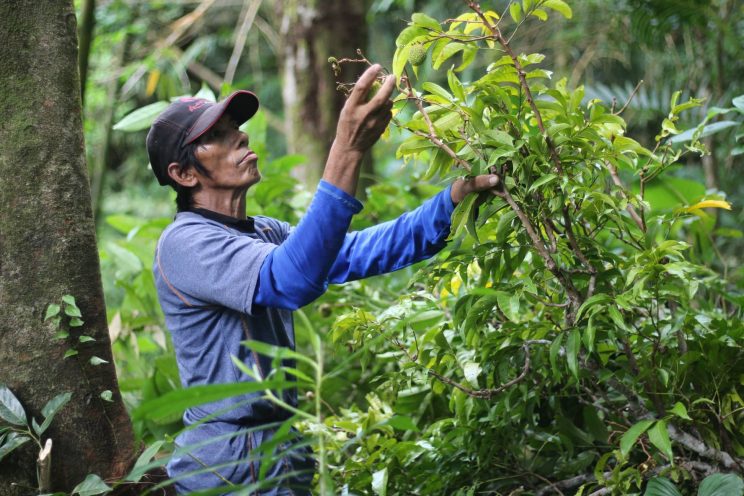 Roy Maulawin harvests ibuli from a sawn-off branch from its tree. (Gilbert Obias)

Ibuli is also found in the neighboring town of Paete, Laguna. Paete municipal agriculturist Antonio dela Rosa said that there are ibuli trees in Sitio Macumbo, Alutay, and Humarap.

According to the Global Biodiversity Information Facility, ibuli has also been documented in other parts of the Philippines such as in Mindoro and Agusan del Norte, as well as in other countries like Malaysia and Indonesia. 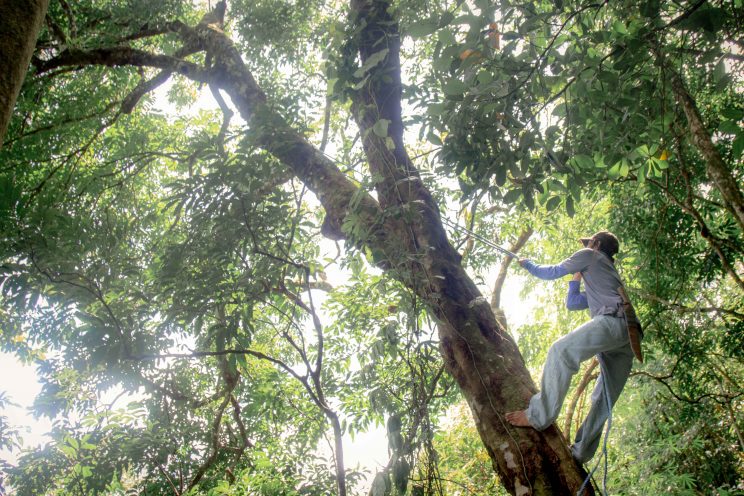 It takes 30 minutes to one hour to reach the kaingin where Roy harvests ibuli. The trail is steep and at times narrow, but Roy has gotten used to the trail at this point. Along the trail are 15 ibuli trees which Roy checks every year to see if they are ready for harvest.

Roy knows that an ibuli tree is ready for harvest if he finds the fruit or skin of ibuli scattered on the ground. He then climbs a tree ready for harvest using rope for support. If the tree is especially high, he ties the rope on his waist for safety as he had fallen from trees before. 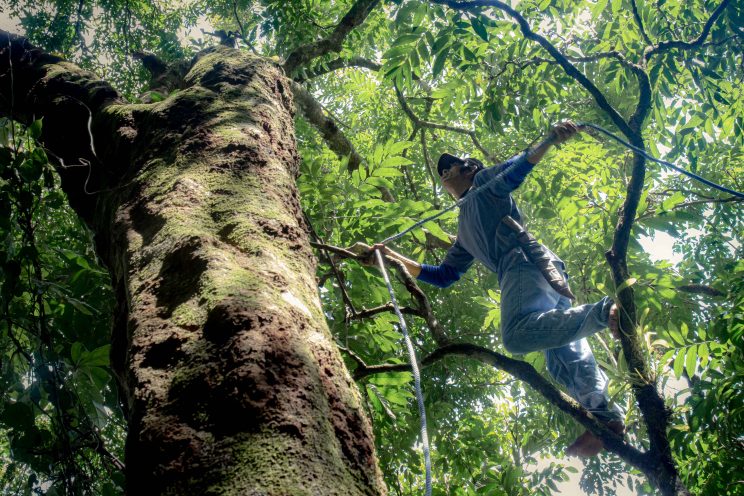 Roy Maulawin uses a rope to support himself as he ascends an ibuli tree. (Jerome Sagcal)

He then selects a branch where there are plenty of ibuli fruits and saws off a branch. This is done for two reasons: First, Roy believes that fruits grow faster on a new branch. Second is that newer and shorter branches are easier to saw off, should they be ready for harvest again in the next few years.

Roy ties the sawn-off branch by a rope and slowly drops it to the ground where another farmer waits to pick off the ibuli fruit. 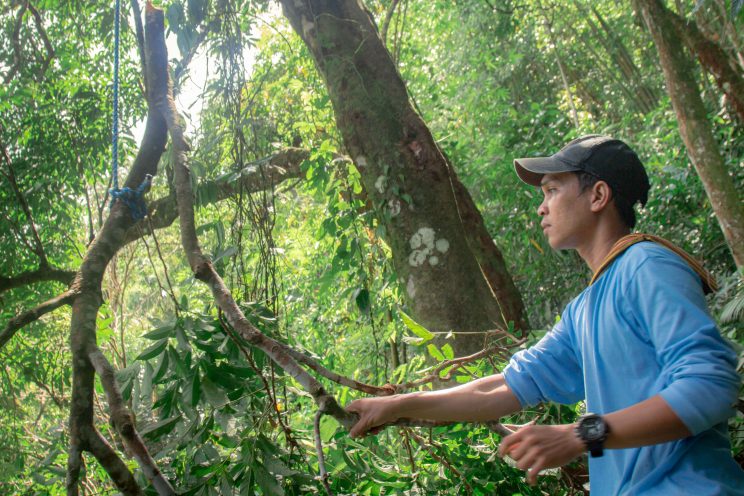 An ibuli fruit is ripe when the skin has cracked. If the seed is wrinkled, this means the skin of the fruit had already cracked a while back.

The most common way to cook ibuli is by steaming it. It can be steamed for up to a maximum of two hours or until the ibuli is soft enough to one’s liking. Steamed ibuli feels soft and starchy in the mouth, with residents comparing it to sweetpotato (Ipomoea batatas). Some residents also compare its taste to that of chestnuts. 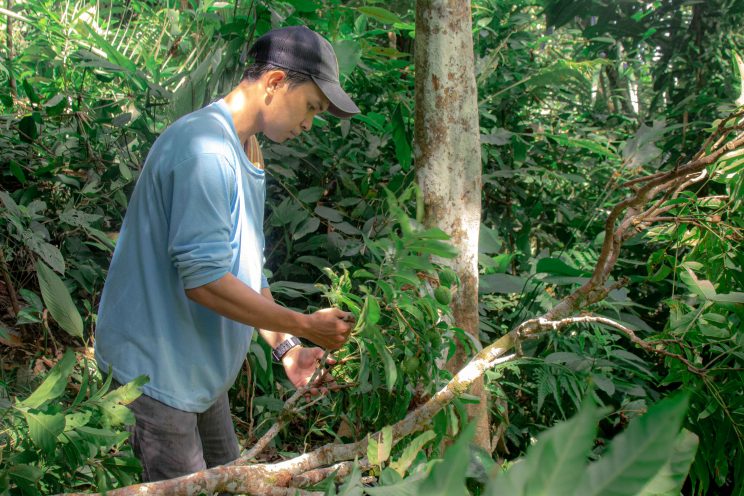 Gilbert Obias harvests the ibuli from the branches. (Jerome Sagcal)

It can be roasted like chestnuts, but this is not a common practice, according to most Pakil residents who spoke with Agriculture Online.

Theresita shared that her aunt used to steam ibuli and roast it afterward. The roasting of ibuli results in the release of oil, which Theresita says may be commercialized if studied further.

Pakil tourism officer Lara Galleros is also hoping to create more products from ibuli so they could market them as a product of their town. She included the ibuli in their tourism pamphlet and if ibuli fruits are available, she gives them away during meetings with other tourism officers. Outside work, she tries to introduce the ibuli to children who often do not know about the fruit.

Even though a lot of work needs to be done to repopularize ibuli, Roy is already worried about the future consequences. He said that marketing ibuli will encourage more people to steal the fruit, which is already a common occurrence in kaingin systems. He is worried that thieves who unselectively harvest ibuli could lead to reduced yield quality over the years. He explained that if a branch is sawn off, it will take two years before it regrows and can be ready for harvest again. It has been his practice that even though he sees a new branch with ibuli fruits, he would rather wait until the next year so he gets a better yield from the tree.

Cultivating the future of ibuli

DENR Administrative Order 2017-11, which updates the national list of threatened Philippine plants, classified ibuli as endangered. This means that though ibuli is not critically endangered, its preservation in the wild is unlikely if factors that negatively affect its survival continue to exist.

The wood of the ibuli tree is illegally harvested for charcoal and construction materials by non-residents of Pakil, Laguna. Roy, who used to be a member of the local government’s bantay kalikasan (forest guards), is open about his frustration about the poor enforcement of laws that are supposed to protect trees.

“Sisitahin namin tapos di kami susuportahan. Walang mangyayari (We reprimand those who illegally harvest trees in the mountain but we don’t get backing from the local government. Nothing ever changes.),” Roy added.

To counteract the decreasing number of ibuli in the wild, the agriculture office led propagation projects in the past. Theresita, however, is not sure about the impact of their previous project as they were unable to monitor the plants due to a lack of manpower.

“Sa dami ng project ng agriculture, iilan lang kami (The agriculture office has a lot of projects but we have limited manpower in our office),” Theresita said. “Unlike sa national level, iba yung sa rice, iba yung high value, iba yung corn, iba yung livestock. Pag local kasi, lahat sayo e. (At the national level, there are different agencies in charge of rice, high-value crops, corn, and livestock. But at the local level, all of those are our responsibilities.)”

Nevertheless, the Pakil agriculture office ibuli tree is excited about the renewed interest for ibuli. More people are finding out about ibuli through social media. There is also an ongoing study by the Institute of Plant Breeding to identify the medicinal benefits of ibuli. The local government also seems to be supportive of the promotion of ibuli. In April 2022, the mayor and municipal council issued a new ordinance to intensify protection for ibuli.

But as Roy expressed, necessary to all of this is proper enforcement of laws. Without this, nothing ever changes.

Photos by Jerome Sagcal and courtesy of Gilbert Obias from the Pakil Agriculture Office.