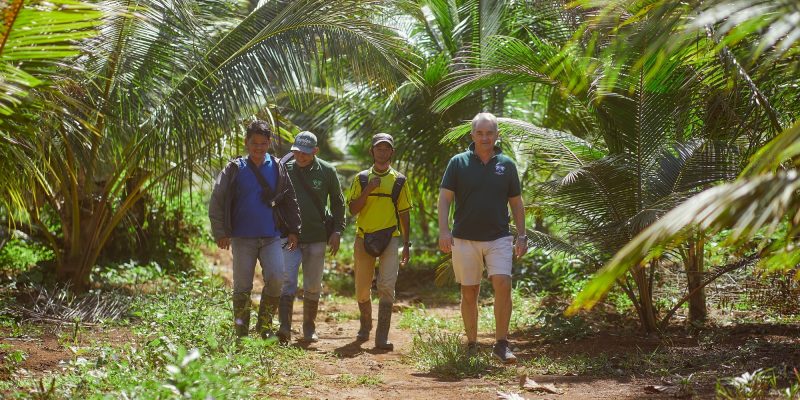 Lionheart Farms has more than 500,000 palms, all of it planted on leased IP land. It also employs local community members who are, if not from Jose Rizal itself, at least mostly from Palawan. (Lionheart Farms)

The coconut tree is called “the tree of life” because every part of it can be put to use. However, the coconut as a crop has a complicated history in the Philippines, with coconut being a high value crop while its farmers remain some of the poorest and most marginalized in the industry.

A coconut farm in Palawan aims to change this by supporting the local community as it champions sustainability and reforestation.

Lionheart Farms (LF) is located in Rizal, Palawan. “We wanted to build a business that would be very socially and environmentally responsible,” says co-founder and president Christian Eyde Moeller, a Danish entrepreneur. “I myself have invested in climate technology more than 20 years ago, so we also saw an opportunity to address some of the climate issues through agriculture [while] using the very efficient crop of the coconut palm.”

The founders also wanted to address long standing structural challenges: “Our observation was how come that a palm or tree or a crop that has so many possibilities, how is it that coconut farmers are struggling?” 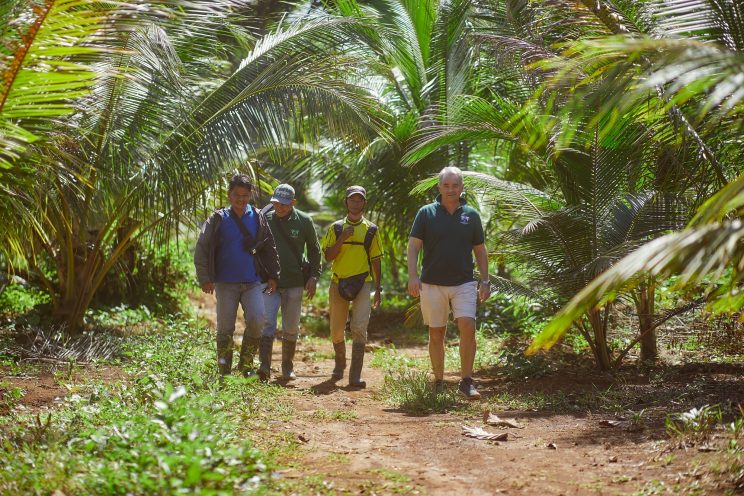 Lionheart Farms has more than 500,000 palms, all of it planted on leased IP land. It also employs local community members who are, if not from Jose Rizal itself, at least mostly from Palawan. (Lionheart Farms)

Sustainable from the start

Moeller, whose father was a wheat and barley farmer, understood that to be successful, a farm needed to be built with intention and run like the business that it really is. Even before it was established, Moeller and his partners knew that they wanted a farm that was profitable, sustainable, and that benefited the local community.

“I believe that when you look at the [United Nations’] Sustainable Development Goals, it’s like an open book of business opportunities… each of them represents big global issues, and anytime there’s a big global issue, there’s also a massive opportunity,”  Moeller says. “All of these things inspired us to try and create this business, which of course is where Lionheart Farms is today.”

They did a lot of research and consulted experts on how to maximize the profitability of a coconut plantation. Two of the most striking things they realized was that the commonly used coconut palm (Cocos nucifera) tends to have a low yield and that the national average is about 50 nuts a year per tree, as opposed to, say, India’s 300-400 nuts per year. “In well-managed areas, those yields can be significantly above the national average,” Moeller says.

A reason for the current national average is that most coconut farmers are “not used to paying attention to, or… deliberately establishing a coconut farm with carefully selected varieties that are specific to the purpose from which you want to harvest.”

Because of this, Lionheart Farms’ founders realized that they needed to establish a new farm, especially since they wanted to focus on the active management of their crops. “Even before we are planting, we are actively treating the soil with a pre-treatment and we actually have a maintenance program that [involves a] monthly application [of organic inputs] to every single palm,” Moeller says. “We do this because we believe that if you do that and you select your plant material carefully and if you actually establish the farm so that it is integrated with the processing, then essentially you can create more value and if you can create more value, then you are also able to share that value by, for example, providing better terms and conditions for your workers. And you can build a stronger business.”

All of Lionheart Farms’ trees are maintained on a regular basis to ensure peak productivity. Much of the cultivation practices implemented comes from the Philippine Coconut Authority (PCA). “We quite quickly found out that all we had to do was simply look at established research and all the answers were there already,” Moeller says. “What we have done is adaptive science. You take existing established science research that’s available and you modify it and adapt it to the specific situation.” 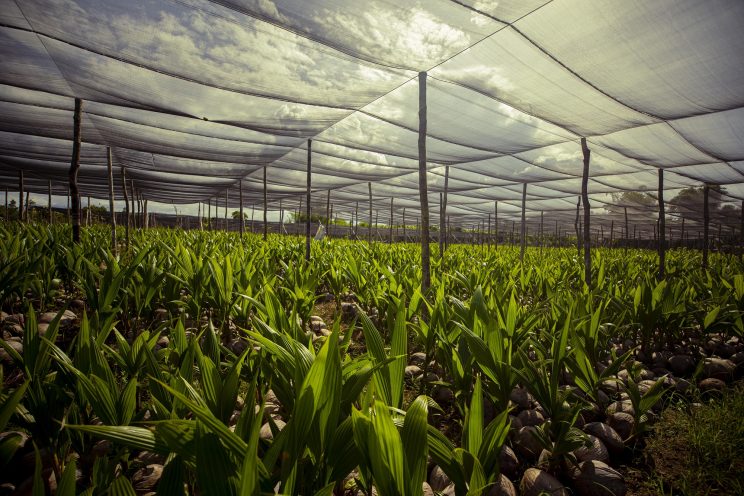 The Farms are planted to more than 10 different coconut varieties chosen for their higher yield. (Lionheart Farms)

Moeller declined to name the coconut varieties cultivated, “ but I can share that we have more than 10 different varieties and what we have focused on is having varieties that support higher yields.”

Aside from the aforementioned quality of soil, quality of planting material is also important, as well as the farmers’ commitment to actively manage their crops as they grow. Optimum land utilization is also essential. “[It’s] part of the sustainability principle… What you want to do is minimize your negative [impact] on society [and] the environment, so what we have also done is, again, follow the recommendation of PCA [to] increase the planting density on a per hectare basis [and use a] crop so that you get a very efficient retention of water… The next thing you do is you actively apply your bio organic fertilizers. This is the starting formula,” Moeller says, adding that they use a variety of cover crops, kudzu (Pueraria montana) being the most prevalent.

All of LF’s partner farmers have access to training on agricultural practices, as well as to inputs like the bioorganic fertilizer. “As part of our advocacy to promote sustainable regenerative farming, we are of course passing it out to others so that they can have a chance to adopt it,” Moeller says. “When we did the training, it was open to anyone… We refer to that as our Community Commitment…. That’s something that… we made part of the DNA of our business model since day one.”

Today, the Farms have more than 500,000 palms, all of it planted on leased IP land. “We went to the indigenous community and said you have land which is not developed… Why don’t we cultivate this land together? You contribute with [leasing] the land [and] the willingness to work, and in exchange, we will provide the capital, the management, the access to markets. Essentially, we will take the commercial risk of putting this business together,” Moeller shares, adding that they also work with farmers in an area of up to a radius of 200km around the Farm.

LF employs local community members who are, if not from the municipality itself, at least mostly from Palawan. “We are completely digialized from one end to the other and we have done 100% of that ourselves,” Moeller says. 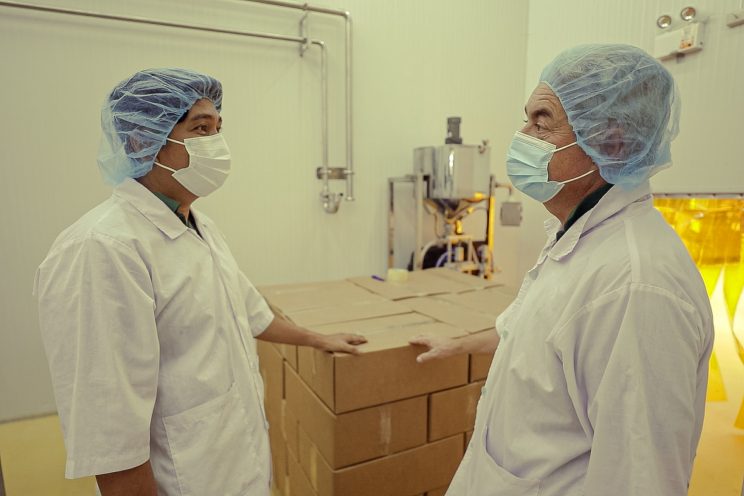 LF employs local community members who are, if not from Jose Rizal itself, at least mostly from Palawan. “We are completely digialized from one end to the other and we have done 100% of that ourselves,” Moeller says. (Lionheart Farms)

LF also aims to produce as much of its needed supplies within the local community. For example, the waste material for 600,000 kilos of bioorganic fertilizer needed monthly are bought from the local community, creating livelihood for about 200 more people. “What happens now is you spend a hundred per cent in the local economy, That’s where you get to your sustainable development. And when you talk about sustainable development, it’s really about recognising that… job creation is actually the most efficient change agent.”

There are also educational, forest and riverbank regeneration, and agroforestry programs, the latter in cooperation with the Department of Environment and Natural Resources (DENR). LF also established a foundation that promotes indigenous culture and is currently working with the United States Agency for International Development (USAID) towards becoming “the first company in Asia within agriculture to be certified for issuing of climate bonds.”

Quality products for the export market

Lionheart Farms produces different coconut-based products, including coconut flower nectar and syrup, coconut flower sugar, coconut vinegar, and coconut aminos mostly for the European and North American export market. This comes from the founders asking themselves the question, “what are the most efficient ways you can extract maximum calorific value from what [you’re] going to harvest” and finding out through research that “if you harvest the sap from the coconut flower… you can harvest more calories per palm or per hectare compared to if you harvest nuts” and that the sap can be made into a multitude of products, which means more jobs.

Lionheart Farms “is very much focused on connecting with more markets around the world.”

“We want to connect with… customers around the world who really care about the same things that we care about both in terms of people and planet,” Moeller says. “I’m talking about benchmarking against the highest industrial standards for food safety, medical business…. We literally pursue every level of accreditation, certification, compliance that’s out there, and that’s simply because we believe that that is the best way that we can give consumers the kind of assurance that they’re looking for….”

For example, they are currently “in the process of adopting an international standard with regards to how to work within indigenous communities.”

The story behind Lionheart Farms is just as important as the products it produces. “To some people, this might just be a sweetener [or] a seasoning, but I believe that if you look at the global markets, consumers really want to know what [they’re] buying,” Moeller says. “You want to know where it came from, how it was produced, you wanna know the story. And I believe that is very much part of this global consumer trend.”