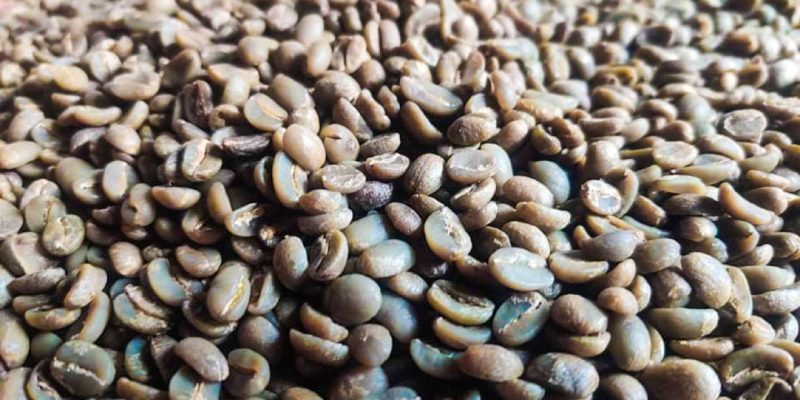 Coffee beans are hulled before being roasted or sold as raw items. Ms. Marivic strictly adheres to international standards when it comes to sorting coffee to ensure premium Quality. (Daniel Maches)

Marivic Dubria, an impassioned coffee farmer, is leading her fellow community members to produce award-winning coffee on the foothills of Mt. Apo. The coffee harvested here is now recognized internationally for its exceptional quality.

Because of the coffee industry, what used to be a sleepy village is now a favorite destination of coffee aficionados, including adventurers and explorers.

Here is how coffee brewed into prosperity not only for Dubria, but also for the whole barangay of Balutakay. 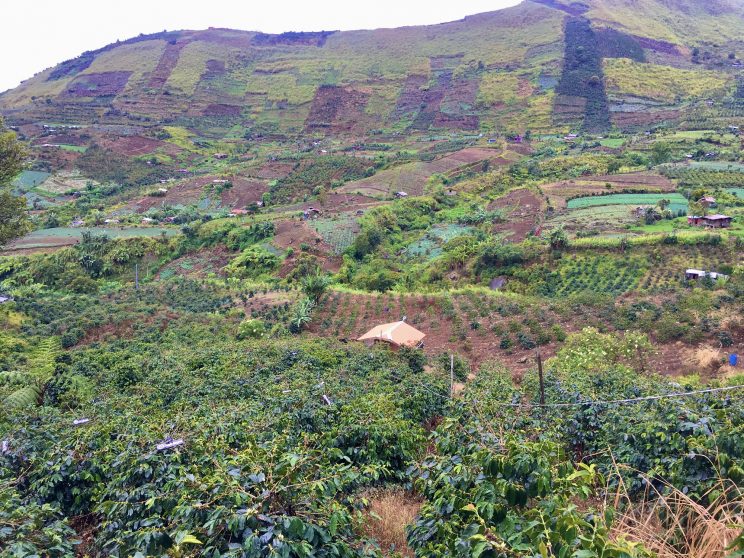 The mountains of Bansalan in Davao Del Sur are ideal spots for growing premium Arabica coffee. Coffee farms here have an elevation ranging from 1300-1700 meters above sea
Level. (Daniel Maches)

Purok Pluto in Sitio Balutakay, Barangay Managa, Bansalan is one of the remote communities of Davao Del Sur, located on the slopes of Mt. Apo. Although it’s popularly known as one of the jump-off points to the said mountain, it’s coffee that has brought an additional  level of economic prosperity to the area. From what some would consider an unforgiving landscape, Balutakay has now a thriving coffee industry. 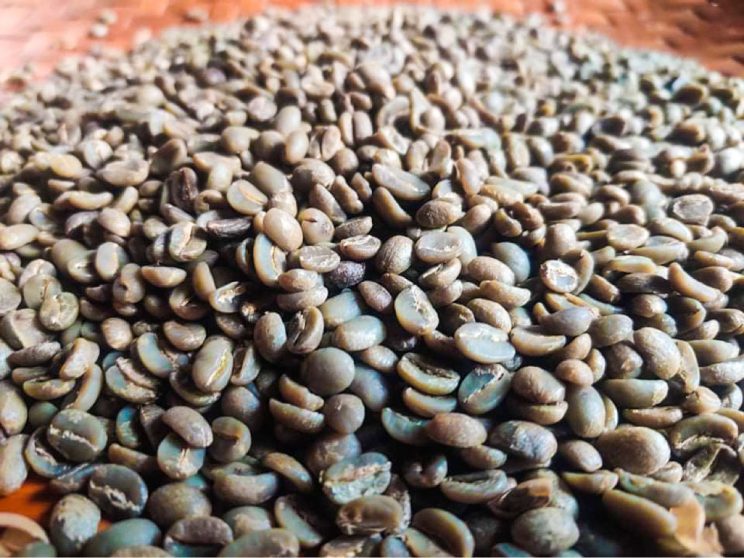 Coffee beans are hulled before being roasted or sold as raw items. Ms. Marivic strictly adheres to international standards when it comes to sorting coffee to ensure premium quality. (Daniel Maches)

Dubria shared that before, the farmers here subsisted on planting temperate vegetables such as cabbage, spring onion, beans, lettuce, and many more. In the process, much of the rainforests have been cleared, leading to soil erosion and degradation. The use of chemical inputs such as pesticides were also rampant, leading to increased acidity that renders the soil unproductive.

Despite initial successes in vegetable production, many farmers continued to face financial difficulties due to unpaved roads and lack of access to a market. But with coffee being introduced in the area, things turned favorable for the farmers and their families.

With assistance from the government and private organizations, a group of 20 farmers convened to form the Balutakay Coffee Farmers Association (BACOFA) in May 2013. By 2017, the association’s membership had reached around 200. They then renamed the organization the  Balutakay Coffee Farmers Agriculture Cooperative, which presently has 108 members.

Dubria, who now serves as the cooperative’s president, shared that before, their only known market were local traders and technicians. She also mentioned that since many coffee farmers were new to coffee, they implemented many improper practices, thus affecting the quality of coffee they produce. 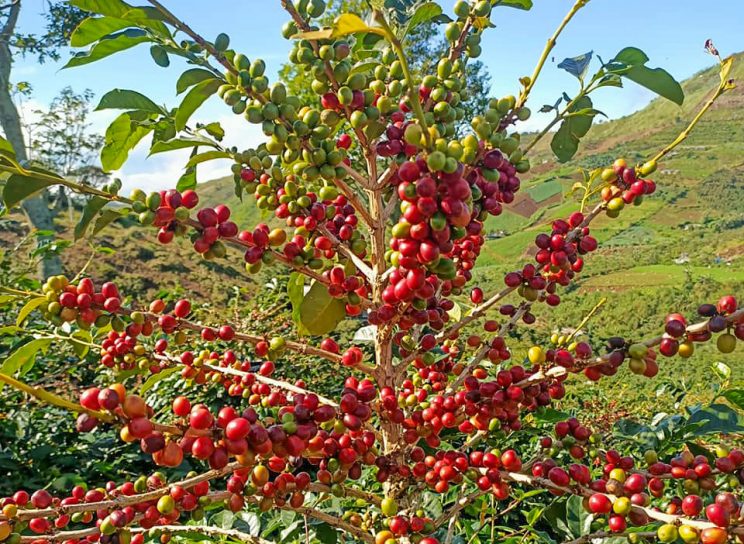 A coffee tree showing plentiful cherries. It is a Catimor Arabica, a variety known for its resistance to pests and diseases. (Daniel Maches)

What led to the gradual success of BACOFA was the active participation of its members in training sessions and seminars organized by both the government and private sectors. Through these, BACOFA farmers gained awareness and knowledge of the standards practices to produce quality and marketable coffee.

Among the agencies the provided support are the Department of Agriculture (DA) and the Department of Trade and Industry (DTI) along with private like the Kapwa Upliftment Foundation and the Philippine Coffee Board, Inc. (PCBI). With sustained support from these organizations, the BACOFA farmers were geared to produce high quality coffee.

As one of the key persons of the BACOFA, Dubria participated on the DTI’s Kapatid Mentor Me (KMME) Program, graduating on October 4, 2017. This introduced her to the best practices of properly running a business and improving marketability of products. She also gained numerous connections, which helped pushed BACOFA’s coffee into the spotlight.

Dubria relatedly mentioned that it was not easy to convince the farmers to shift to coffee as they are used to producing temperate vegetables. But thanks to government and private interventions, more and more of the locals began to plant coffee, some intercropping on their existing crops.

Dubria’s farm lies next to their house, which sits on a vantage point with a panoramic view of the surrounding mountains. Catimor Arabica is the main variety planted. Accordingly, this variety bears more coffee cherries and is more resistant to the damaging coffee rust.

In 2019, Dubria participated in the Philippine Coffee Quality Competition (PCQC) and bagged the first place for the Arabica variety. In the same year, she also represented the country during the Specialty Coffee in Boston, Massachusetts in the United States. 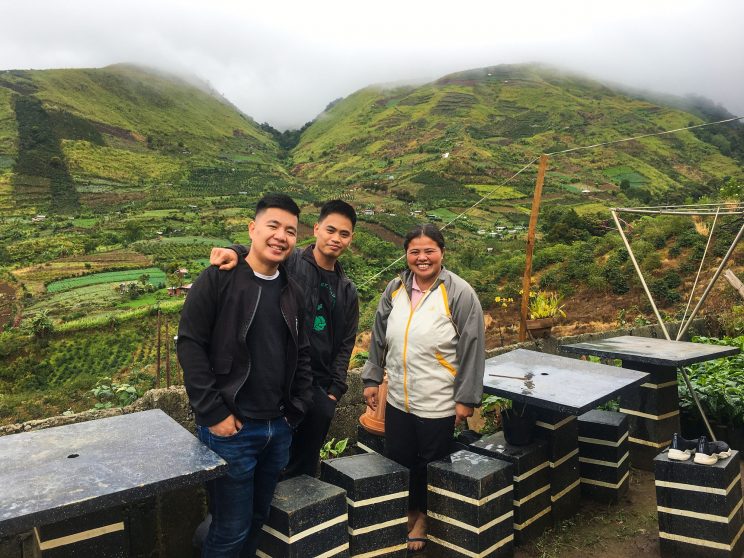 The author, fellow young farmer Ricky Lacbogan, and Ms. Marivic at the backdrop of Bansalan’s coffee farms. She encourages the youth to pursue a career in coffee farming.

A golden opportunity for the young

“Malaki ang demand sa market ngayon sa coffee (There’s a big demand for coffee in the market today). It is the right time for the young to start a coffee business,” shared Dubria. She added that young people today have advanced thought processes and have vast social media experience, thus, it is easier for them to start a business.

Dubria stressed that the youth should put to heart that coffee has a future given the high demand among millennials. She encouraged those who love agriculture to try a career in coffee farming.

“Ako nga nanghihinayang sa panahon na nagfocus kami sa vegetable noon, na ngayon nakikita ko at naituturing ang coffee is a black gold (I feel a little bit of regret that we focused on farming vegetables in the past instead of coffee, which is a black gold),” said Dubria.

Aside from career opportunities, Dubria underscored that venturing into coffee farming is one way for young people to help the environment, especially with the looming climate change.

She shared that coffee trees hold the soil and helps preserve water sources. “Vegetable planting erodes the soil because of continuous tilling of the soil. And if we lose all the trees in the mountain, we will have water problems in the future,” Dubria added.

Including agriculture in tourism can boost both industries