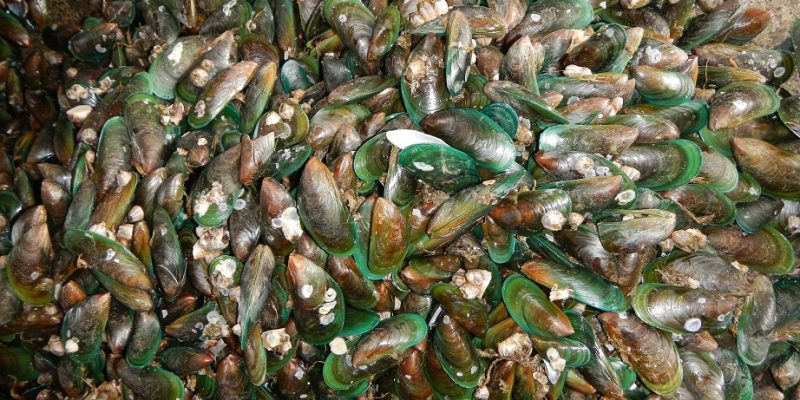 The Asian green mussels (Perna viridis), locally known as tahong, are bivalve mollusks characterized by their green coloration. Younger green mussel shells have hints of blue while adult mussel shells are more brownish. They can grow up to 80-100 millimeters in length at a rate of six to ten millimeters per month.

From pests to food

Green mussels started out as invasive species in Bacoor Bay during the 1960s. Ships from neighboring Southeast Asian countries probably brought these mussels into the Philippines. Prior to their arrival, only two species of brown mussels known as amahong (Modiolus philippinarum and Modiolus metcalfei) thrived in the country. Green mussels were originally treated as pests as they competed for space with the amahong, but farmers soon realized how valuable they could be.

Distribution of green mussels started in Manila Bay, but soon expanded to other parts of the Philippines such as in Samar, Negros Occidental, Capiz, and Aklan.

Green mussels thrive in a wide range of salinity from 5.2-39.8 grams of salt per kilogram of seawater (ppt) and ideally in 27-35 ppt. They can also grow in a wide range of temperature from 10°C to 35°C and ideally from 26°C to 32°C. Bays, estuaries, and large landlocked water bodies are ideal sites for suitable farming as green mussels don’t thrive in bodies of water with high turbulence.

Green mussels become sexually mature once they are two to three months old or 20-30 mm in length. Reproduction of mussels occurs externally. They release sperm and eggs into the water where fertilization takes place. The larvae then attach to solid substrates through filaments called byssus. Larvae grow into spats within four to eight weeks and grow to three to four millimeters in length.

Green mussels were traditionally cultivated by impaling a bamboo pole into the muddy bottom of the water. Mussel spats attach to these poles where they also mature on. Fishers harvest them by simply scraping them off the pole.

Fishers now construct floating bamboo rafts where spat collectors are hanged from during breeding season. Spat collectors can be either made with bamboo pieces or coconut shells.  Once the spats are at 2cm in length, they are scraped off, sorted into similar sizes, and transferred to mussel socks where they grow out.

The longline is another method of cultivating green mussels. Instead of using bamboo poles, a line of plastic containers are used as floats where spat collections or mussel socks are attached to.

Spats may also be cultivated in hatcheries. Doing so provides a more reliable source for spats and reduces the environmental impact of mussel farms, while also eliminating risks of collecting wild spats.

Green mussels are harvested once they are six months old or at six to eight centimeters in length. Green mussels are mostly sold to nearby areas of their production because they can only live for two to three days. There are plenty of opportunities to extend the shelf life of green mussels.  Green mussels can be sold frozen or pre-cooked as part of ready-to-eat meals. In other Asian countries, mussels are dried or smoked and processed into a condiment.

The information provided above is from the Department of Science and Technology-Philippine Council for Agriculture, Aquatic and Natural Resources Research and Development (DOST-PCAARRD)’s book titled “The Philippines recommends for mussel.”

Scarecrows now fly thanks to this automated drone system