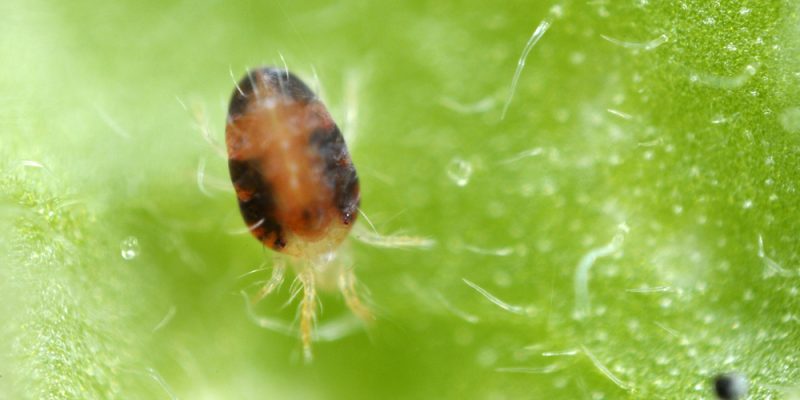 Spider mites are tiny pests that infest a wide range of agricultural crops. Their fast reproduction rate means they often overwhelm whole fields of crops in very little time. Due to their tiny size, it is often too late to implement control methods effectively by the time their populations become observable. (Shutterstock)

There are around one thousand two hundred species of spider mites scattered all over the world, of which the Philippines is home to around thirty species. 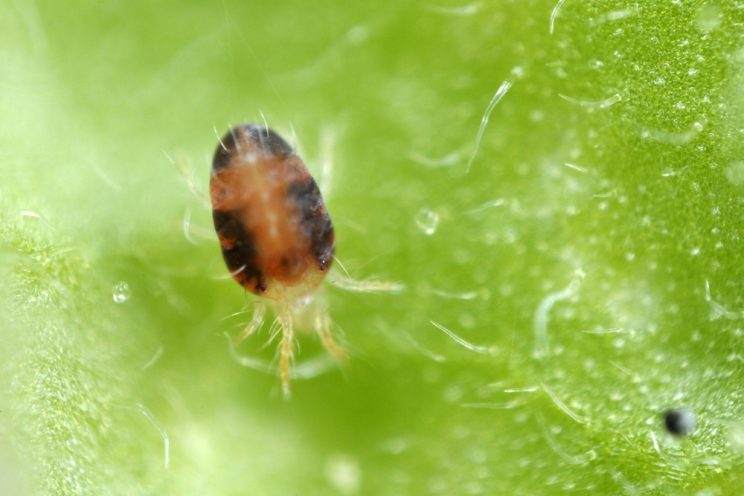 Spider mites are tiny pests that infest a wide range of agricultural crops. Their fast reproduction rate means they often overwhelm whole fields of crops in very little time. Due to their tiny size, it is often too late to implement control methods effectively by the time their populations become observable. (Shutterstock)

Spider mites are some of the most widespread agricultural pests in the world, and have a wide range of host plants. They tend to be less than one millimeter in length and are quite difficult to spot with the unpracticed eye. More obvious signs of a spider mite infestation would be the yellow stippling of the plant’s leaves, where the yellowing of the leaf is, upon closer inspection, actually a clumping of many tiny dots caused by the feeding of the spider mites. Other spider mites are called webspinning mites, and they leave silken webbing on the plant where they reside and feed. Unfortunately, by the time these symptoms can be easily observed, the spider mite population has already ballooned to difficult levels, and quick and consistent action must be taken against them.

Like aphids, spider mites reproduce at a frightening rate. Under ideal conditions, it takes a mere three days for spider mites to hatch from their eggs, and barely five days after that do they become sexually mature. Female spider mites can live anywhere between two to four weeks after that, laying up to twenty eggs per day, or around six hundred eggs at most. Consider that each egg again may become a mature egg-laying adult in little over a week, and the implications of an uncontrolled spider mite infestation becomes quite horrifying to any farmer worth their salt.

Alas, dear reader, the spider mite’s ridiculous rate of reproduction behooves this writer to once again issue a warning against the contemplation of pesticidal control. Spider mites simply gain resistance to pesticides all too quickly for comfort. For those that insist, common pesticides used against spider mites include abamectin, formethanate HCL, methiocarb, and dianizon. However, it is always important to remember that as spider mites gain resistance to pesticides so quickly, reserve such applications as a last resort.

Instead, consider alternatives to these common pesticides such as pesticidal oils or soaps, which may be applied in more selective ways which may help control outbreaks of spider mites without giving them too many opportunities to gain resistance. Canola oil, a common kitchen staple, has been found to be a rather effective and fairly environmentally safe form of pesticidal control against spider mites. Mix two cups of canola oil with two tablespoons of mild, non-degreasing liquid dishwashing soap and shake thoroughly to mix. Store this mixture somewhere dark and cool for future use. Add one and a half teaspoons of the mix with one cup of warm water and shake vigorously to mix and spray generously on the plants, taking care to cover all surfaces of it.

Do note that using canola oil in this manner may be harmful to plants when applied in hot weather, so it is better to spray this very early in the morning or towards the evening in temperatures below 30 degrees Celsius. Canola oil used this way is also useless in wet weather and will also be easily washed away by rain, so check the local weather forecast before application.

As a slight aside, ideal conditions for spider mites are an interesting topic to explore because research shows that spider mites seem to thrive under a particular range of environmental conditions. They prefer warm and dry conditions, with temperatures between 26 to 36 degrees celsius, and fairly low humidity. Certain factors such as the presence of dry soil types like sandy and dusty soils contribute to warm and dry conditions, so spider mites may thrive in farms with such soil types. Water-stressed plants are also less able to defend against spider mites. Another interesting factor favorable to spider mites is the presence of nitrogen. High nitrogen content in the soil or plant somehow improves spider mite population growth, with the current theory being that since plants use nitrogen to produce amino acids, and spider mites feed on these amino acids as a primary food source, higher nitrogen leads to more amino acid production, which means more food for the spider mites to grow and reproduce with.

These ideal conditions should be taken into account as other pesticidal controls such as carbaryl, organophosphates, and pyrethroids may also be suggested against spider mites, but some research shows that the use of these pesticides may actually create more favorable conditions for spider mites to reproduce. This is because these pesticides seem to increase the nitrogen buildup in the treated plants, which as discussed above is actually favorable to spider mite population growth. Do avoid using these pesticides as much as can be reasonably expected.

Having these ideal conditions though, does mean that cultural/mechanical controls which change the environment to one unfavorable to spider mites is an effective way of preventing infestation. Keeping plants properly irrigated and bulking soils or potting mixes with water holding materials help increase humidity. Washing your plants to ensure no soil or dust remains on them also keeps the environment wet and may also wash out some of the spider mites from the plants.

Properly managing the application of nitrogen-based fertilizers is another necessary step. Should you, dear reader, find yourself in a never ending battle against spider mites, consider reaching out to your local state college or university’s agricultural program with inquiries into their soil testing facilities. Check and see if there are excess levels of nitrogen in your soil and how you can reduce the application of nitrogen-based fertilizers to a more manageable level.

As with aphids, the rapid reproduction of spider mites makes them a choice prey species for a multitude of predatory organisms. Ladybugs, lacewings, and hoverflies are all predators of spider mites, but apart from these there are also other mite species which are avid eaters of spider mites. Neoseiulus longispinosus and Phytoseiulus persimilis are predatory mites that have been identified here in the Philippines which feed on spider mites.

Read: What are aphids and how can you prevent them?