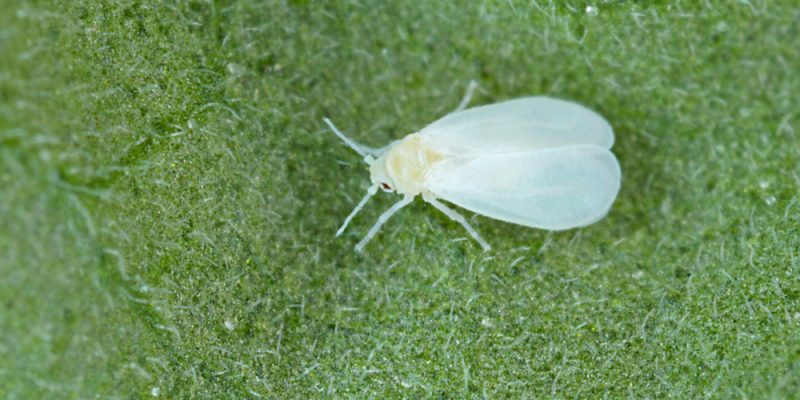 Most species of whitefly shown left are covered in a dusty white coating, giving them their name. A few species however, are actually darker in color. In general, whitefly species are identified by their tiny size and their habit of folding their wings in a tent-like triangle. (Shutterstock)

There are more than one thousand five hundred described species of the agricultural pest known as whiteflies. These are small flying insects which are usually white, for fairly obvious reasons, though some species are actually black. 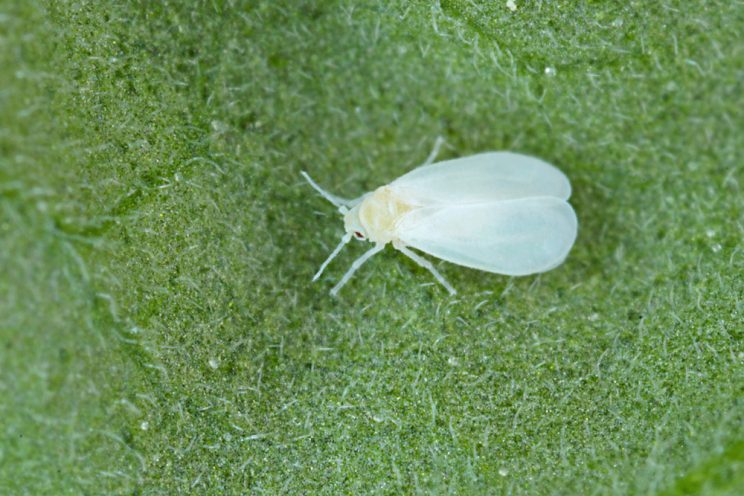 Most species of whitefly shown left are covered in a dusty white coating, giving them their name. A few species however, are actually darker in color. In general, whitefly species are identified by their tiny size and their habit of folding their wings in a tent-like triangle. (Shutterstock)

Generally speaking though, whiteflies have white wings, and soft yellowish bodies. Their wings are usually held slightly tilted in a tent-like triangle along their bodies. They are minuscule, with a wingspan of only three millimeters and a body length of only one to two millimeters.

Like aphids, they feed on the sap of plants, usually on the underside of the leaves. Despite this, whiteflies are not particularly destructive due to their feeding habits, though they have been known to overwhelm host plants through sheer numbers. Rather, whiteflies are destructive to agriculture primarily due to the fact that they are incredibly efficient at spreading disease. Whiteflies are vectors of many important viral plant diseases, mostly mosaic viruses which can infect and severely damage important food crops like potatoes, beans, and cassava. The most dangerous virus spread by whiteflies is the infamous Tomato Yellow Leaf Curl, which can destroy up to 100% of infected crop yields. Aside from damage due to their spread of disease and feeding habits, whiteflies also secrete honeydew like aphids, which also invites mold and bacterial growth which can harm the plant.

Unlike the sedentary aphids though, whiteflies are quite difficult to control as they tend to quickly launch into the air when their host plant is disturbed. Common pesticides used to control whitefly contain neonicotinoids as their active ingredient. Commercially available neonicotinoid pesticides include clothianidin and dinotefuran, and imidacloprid and thiamethoxam. However, whiteflies reproduce and mature in as little as sixteen days in particularly favorable conditions, and they rapidly gain resistance to pesticides through sheer speed of evolution. Another issue is that neonicotinoids have been implicated in honeybee colony collapse disorder, where it seems that while these pesticides do not outrightly kill honeybees, they do seem to have an effect on reducing honeybee survival during periods of high stress. As such, pesticidal control of whiteflies should only really be considered as a last resort.

Cultural/mechanical controls are also less effective against whiteflies. Whiteflies are, quite infuriatingly, small enough to penetrate generally available net barriers. As they are around one to two millimeters in size, they can pass through the small holes of most commercially used greenhouse netting. Worse still, they often escape their predators this way, as these predators are often too large to follow whiteflies past the netting. Farmers who are dependent on greenhouses may find these overrun by populations of whiteflies happily feeding and reproducing without fear of predators. Attempting to trap whiteflies on other host plants is also futile, as they are highly mobile, and their major threat is due to their spreading of disease, not due to their feeding habits.

The best cultural/mechanical control method for whiteflies thus far is the use of yellow sticky traps. In small farms or gardens this can be DIY by painting a board bright yellow then coating with a sticky clear adhesive substance like grease. Commercially available traps are an option for large scale operations where DIY work is impractical. Supernet for example is an aerosol adhesive spray with yellow color, and trap set up is as simple as spraying a clear plastic bottle and hanging these around the farm perimeter. Agricultural companies specializing in pests may also carry large rolls of yellow sticky paper for large scale application around greenhouses. In a pinch, flypaper and other yellow colored sticky glue traps are available at supermarkets and will work moderately well.

For small farms and gardens, and if the option presents itself, vacuuming the underside of a plant’s leaves will also work to reduce whitefly populations. In this particular case, the whiteflies’ instincts work against them; they move in the direction of the wind, which with vacuums is into the belly of the beast. Yes, it does seem rather silly to stand in the garden with a vacuum cleaner, vigorously vacuuming plants. Do be prepared for more than a few strange stares from neighbors and passers-by.  Rest easy instead, in the fact that this little embarrassment will pay off greatly in the end, with plants that are healthy and free from the diseases brought by whiteflies.

The most effective method of controlling whiteflies, however, is to invite biological control organisms into your farm. Ladybugs and lacewings are your friends once again, as they are quite happy to feed on the whiteflies flitting about your crops. You can attract these helpful insects to your farm or garden by planting a variety of flowering plants. Dill and cilantro flowers are pretty additions to any planting and are attractive to friendly bugs. Sunflowers were already mentioned, but you can also plant marigolds, cosmos, and sweet verbena to further attract more friendly bugs. Marigolds also have been observed to repel whiteflies, a lovely extra benefit from such a lovely flowering plant.