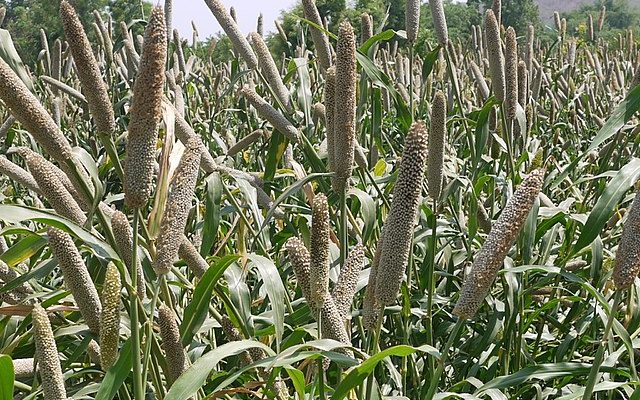 Pearl millet was the crop used during a study on urine as fertilizer. Photo by Dinesh Valke from Wikimedia Commons.

Despite being readily available, human urine is rarely used as a fertilizer. Farmers prefer buying chemical fertilizers which are often manufactured through carbon-intensive processes. It’s a missed opportunity that most farmers skip on urine when the fluid is packed with all the macronutrients that plants need to grow.

To determine if using urine as a fertilizer was worth implementing on a wide scale, researchers from the National Institute of Agricultural Research of Niger conducted farm trials using a sanitized urine product.

A group of Niger women volunteered to use the urine product. Women farmers in sub-Saharan Africa work more than their male counterparts, but they struggle to acquire their own land and resources. They are often left with poor-quality lands to cultivate a grain called pearl millet (Cenchrus americanus).

The volunteer farmers were trained to sanitize and dilute urine. The resulting product was called Oga, which translates to “the boss” in Igbo, a language used by an ethnic group in southeast Nigeria. Giving the product a name allowed farmers to openly discuss urine.

As part of the study, the farmers were divided so that one group retained their farming practices while another group tried out Oga. Animal manure was used alongside Oga in the first years of farming but farmers used Oga alone when it proved to have improved their yields.

The researchers conducted 681 trials from 2014 to 2017 and found that those who used Oga harvested an average of 30% more yield for their crops. The results of the study encouraged more women to use Oga, with more than a thousand women farmers now using the product.

Applying this fertilization technique in more developed countries may not only improve crop yields but also better allow more sustainable infrastructure and systems for sanitation. This alternative approach to fertilization is also timely with the ongoing shortage of chemical fertilizers across the world.