It was a Tuesday morning on August 25, 2009 when the Bodiongan couple from Iligan City went out to their lanai and stared at their mango tree.

The tree was a unique one. It was a crossbreed between a Florida Keitt mango and an unknown mango strain. When it first bore fruit in 1996, the couple felt immensely blessed when they saw how humongous its fruits were. The biggest mango they ever got from the tree was around 2.8 kilograms.

It has been the habit of the couple every morning to look for mangoes to harvest as August is around the fruiting season of their mango tree. Sergio Bodiongan told his wife, Maria, that they should harvest the mangoes before the bats come to get them.

“Kunin mo (Get them),” Maria encouraged him. 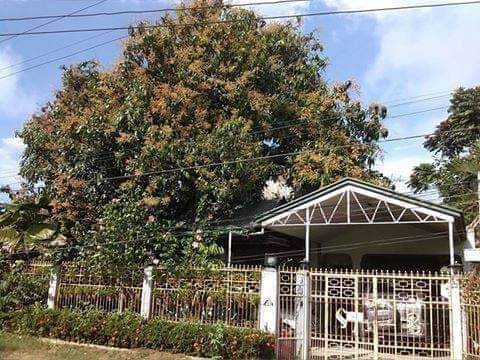 The Mangoming tree was planted in the backyard of Maria and Sergio Bodiongan’s house in 1992.

For the past few weeks, Maria had been whispering to the tree to give her something bigger. “Mangoming,” she told the tree. It was her term of endearment for the tree. “Bigyan mo naman kami ng masmalaki sa dati. Three kilos naman (Give us something bigger, like three kilograms).” It was to her surprise that nature actually gave in to her request.

Sergio took a ladder and ascended the tree to harvest the mangoes using a picker. He snatched a mango and lowered the picker to the ground so Maria could receive the mango. What Maria saw was a mango so big it was wider than the spread of her two hands.

“Ang laki-laki! (It’s huge)” Maria said. The mangoes from their tree were naturally large, but she has never seen a mango this big in her entire life.

She rushed for their scale to see how heavy the fruit was — it was 3.5kg.

When her husband descended the ladder, he was equally surprised. Then he asked his wife, “Anong gagawin natin dito? (What do we do with this?)”

What they did next set the course for Maria’s current advocacy, which is to share what was for a time, the world’s heaviest mango until 2021.

The heaviest documented mango in the world at that time was a Keitt mango owned by Colleen Porter from Kailua-Kona, Hawaii. It was 2.4 kilograms. Apparently, the Bodiongan couple had long beaten the record when they previously harvested a 2.8-kilogram mango so it encouraged them to pursue the Guinness world record for the heaviest mango.

They searched online what they had to do and they found out that part of the requirements was that their mango needed to win an agricultural contest. They found that the Sundayag Festival in Cagayan de Oro was about to host the “Pinaka” (“The Most”) competition in two days. It was an event where farmers and growers competed to earn awards for fruits and vegetables with extreme characteristics.

The couple took part and the Mangoming fruit easily won for heaviest mango. It was also in this event that they found out the exact weight of their mango, which was 3.435 kg. It measured 30.48 cm in length, 17.78 cm in width, and 49.53 cm in circumference.

The Bodiongan couple had to go through various other requirements such as getting media coverage. There was even a point they had to tap into their savings just to pay for all the required documents. Their efforts paid off in December 2009 when the Mangoming was finally recognized by the Guinness World Record as the heaviest mango.

It has been the advocacy of Maria ever since to share the Mangoming. After setting the world record, she expected the government to hop in and reach out to her. She saved scions of the Mangoming tree in case the Department of Agriculture (DA) reached out to her. But for a long time, this did not happen.

“Yung gubyerno, di niya pinapansin for how many years. Noong na-Guiness, dapat alam na yun ng DA. Dapat ginawa nila, di na nila hinintay na ako yung mag-approach, dapat sila mag-approach sa akin (The government did not reach out to me for years after I got the Guiness world record. What they should have done was for them to approach me instead of the other way around.),” Maria said.

By 2012, she lost hope in the government and gave away the scions to interested growers she found on social media. The first time she gave away scions en masse was in December 2016.

Assisting Maria in her advocacy are two other growers from Luzon. Initially, Maria instructed recipients of her scions that they could plant a seed of any mango variety and graft the scion into it after a year or so. “Di naman kasi ako marunong mag-graft, so scions lang pinamigay ko (I didn’t know how to graft so I just gave away scions),” Maria said.

One of the recipients needed help in grafting so he reached out to Rey Buencamino, a plant propagator. Rey found out that the Mangoming scion was just given for free, so he volunteered to help Maria cultivate more grafted seedlings.

Recipients of the Mangoming faced another issue in growing the plant. It was that they grafted into rootstocks that were too young. They needed a supply of mature rootstock. This was when Glods Penuela, a farm consultant from Calamba, Laguna, came in to volunteer and donate rootstocks for Rey.

Glods and Rey have been working together to propagate more seedlings. They have also been helping to deliver the grafted seedlings to recipients.

“Sila lang pinagkakatiwalaan ko (I only trust these two), “ Maria said. “Nahihiya nga ako sa kanila kasi nag-aabono pa sila. Yung time nila sa livelihood ay naabala ko. Tapos ang dami pa naiinggit sa kanila. Pero dedicated sila to support my Mangoming advocacy. (I get concerned that they use their own time and money to propagate the Mangoming. Another issue is that other people envy them. But Glods and Rey remain supportive of my advocacy.)” 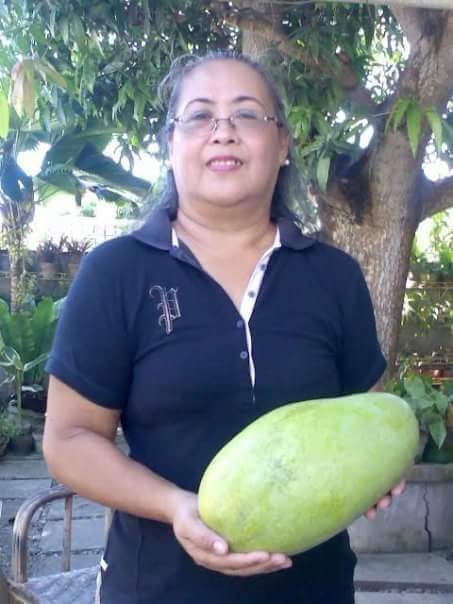 How to avail of the world’s formerly heaviest mango

Maria does not discriminate when sharing the Mangoming. She gives them away to anyone willing to accept her conditions for cultivation.

She created a Facebook group to monitor the growth of the Mangoming seedlings she has given away. One of the issues with maintaining an online community is the tendency of recipients to “ghost” her.

“Kaya ngayon stricter ako. So ngayon gusto ko yung tao talaga, yung may pangalan, yung profile picture ay di mga aso, di mga kung anu-ano. Yung totoong tao talaga na pwedeng mag-commit… na mamimigay sila, di nila pagpeperahan, di nila ilalabas sa bansa. Yun ang tatlong [requirements] lang. (This is why I’m stricter nowadays. I don’t give to those who don’t use their real names in Facebook, as well as those who don’t use their real face in their profile picture. I only give to people who are willing to commit that they will share the Mangoming, that they will not profit from it, and that they will not bring it to other countries. Those are the three requirements I impose.)” 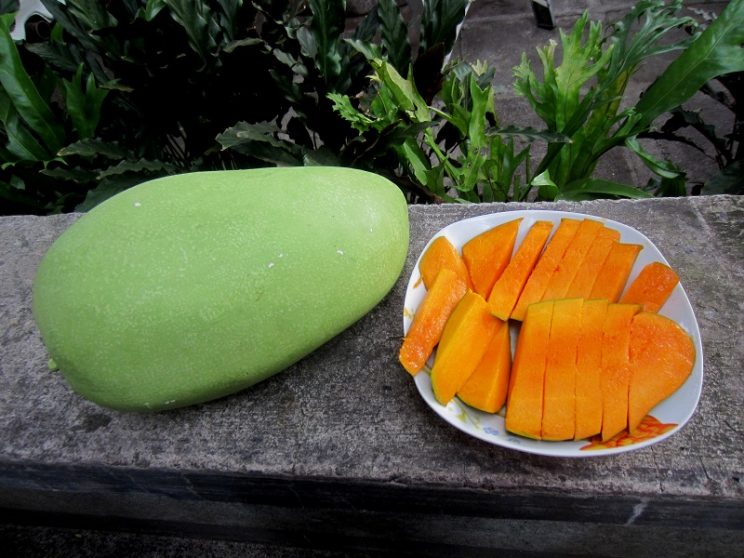 The average Mangoming fruit weighs around 1.12 kg, with the heaviest Mangoming weighing 3.44 kg.

Registering the Mangomign as a variety

The Mangoming was registered as a mango variety under the National Seed Industry Council (NSIC) on November 21, 2018. Maria was hesitant for a long time to register the Mangoming as she found no need for it. Another reason was because of the expenses involved.

Not only was she going through colon cancer at that time, but Sergio has been bedridden since a brain surgery. “Hirap na hirap na ako sa husband ko. P20,000 a week. Tapos may kuryente, oxygen, bale P100,000 monthly ko. (I struggled with the expenses of caring for my husband. I spent P20,000 a week. Then I had to pay for electricity and oxygen which meant I spent P100,000 monthly.)”

A friend, who insisted that she register the Mangoming helped her with the expenses involved. Her friend had connections with the government so she helped her get in touch with the relevant agencies.

One condition Maria insisted on before the registration of the Mangoming was that she did not want her mango variety to be commercialized. According to Maria, In one instance, former DA Secretary William Dar ordered to propagate Mangoming and negotiate a sharing agreement with her.

This did not sit well with Maria so she called DA to remind them of their agreement. She said, “Nagpa-register lang ako para may pangalan siya sa mga pinapamigay ko…So dapat di nila pilitin na i-export natin yan. Sino lang magkapera nun? Mga exporters lang. E tayo mga rejects lang makakain sa Pilipinas. (I only registered the Manngoming so it can officially get a name. If they decide to have the Mangoming exported, only exporters will benefit while Filipinos will only get to eat the rejects.)”

“Parang rebelde ako ba (I felt like a rebel),” Maria laughed as she recalled her conversation with DA.

Asked what she would do if she found that commercial farmers obtained planting material for Mangoming through government agencies, she said, “Mag-complain ako. Kasi ang sabi nila sa akin, nung nagpa-register ako, as a variety owner, ako daw yung may say. (I’ll complain. They told me I had the right to do so as I own the variety.)”

Through Maria’s advocacy, more than 1,500 people have received planting material for Mangoming. She aims to continue doing so with the remaining years she has in her life. Maria even considers registering a non-profit organization so her advocacy could continue long after her life.

There is much work needed to be done, but Maria will not stop until the Mangoming is readily available for all Filipinos. She hopes to accomplish this with the help of individuals committed to spreading the Mangoming not for financial gain, but to spread what she sees as God’s gift.

For those looking to grow Mangoming, they may follow Mangoming Highlights by Maria Socorro Modequillo Bodiongan for updates on the next batch of seedlings.