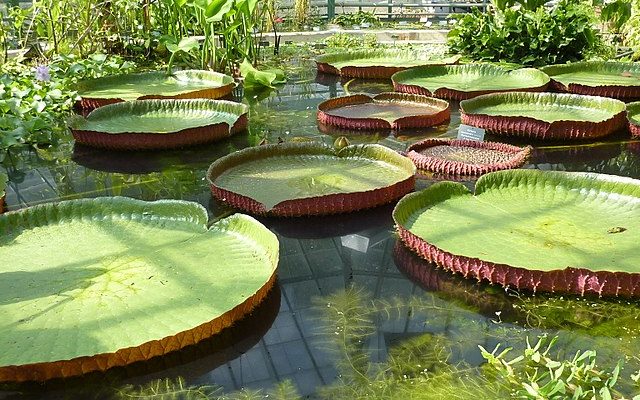 Photo of Victoria amazonica, which was the species that Victoria boliviana has been misidentified as for 177 years. Photo by James Steakley from Wikimedia Commons.

The largest waterlily has just been hiding in plain sight. The newly identified Victoria boliviana has been housed in the Kew Gardens in London for 177 years, where it was long misindentified as Victoria amazonica. A team of experts led by Oscar Escobar and Natalia Przelomska proved that Victoria boliviana was a separate species by studying new and historical data.

It is native to Llanos de Moxos, a wetland region in Beni, Bolivia. It blooms with several flowers each year, but each flower only opens one at a time. The flowers only bloom for a brief period of two nights as it transitions from white to pink. It is also characterized by its underside which, according to scientists at the Kew Gardens, resembles a “cross between a suspension bridge and the roof of an old cathedral.”

The Victoria genus has two member species: Victoria amazonica and Victoria cruziana. Though scientists have long suspected a third member of the genus, it has been difficult to prove so due to lack of data.