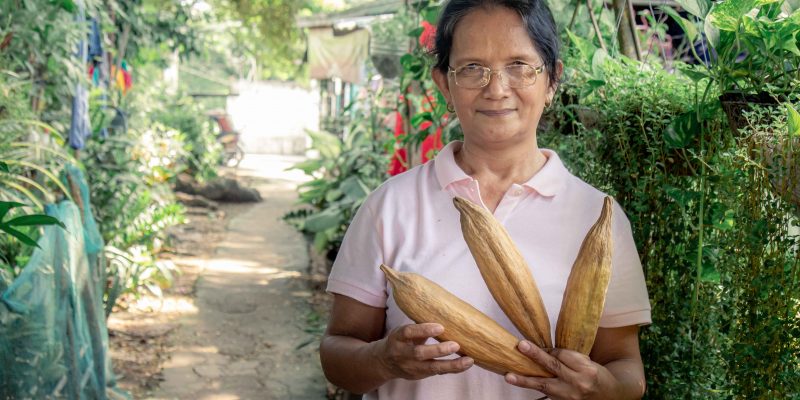 A row of houses surrounds the front of a cement company in Trece Martires City, Cavite. It is in one of these humble housings provided by the company where Rose Barcena, her husband, and her three children live. Her husband toils his days away in the company, leaving Rose to manage the household.

Being miles away from their family meant that Rose carried the sole burden of taking care of their three children when they were younger. Should she have continued working professionally, she might still be a school teacher. But despite her circumstances, Rose has always felt the need to make money on her own so she could help her husband.

She has engaged in all sorts of sidelines throughout the years. She has sold rice cakes, cosmetic products, and footwear. She used to run a small sari-sari store and a food stall, but they had to close it when the cement company downsized due to the COVID-19 pandemic. Out of all her sidelines, perhaps the most unique is crafting pillows from a fiber called kapok. 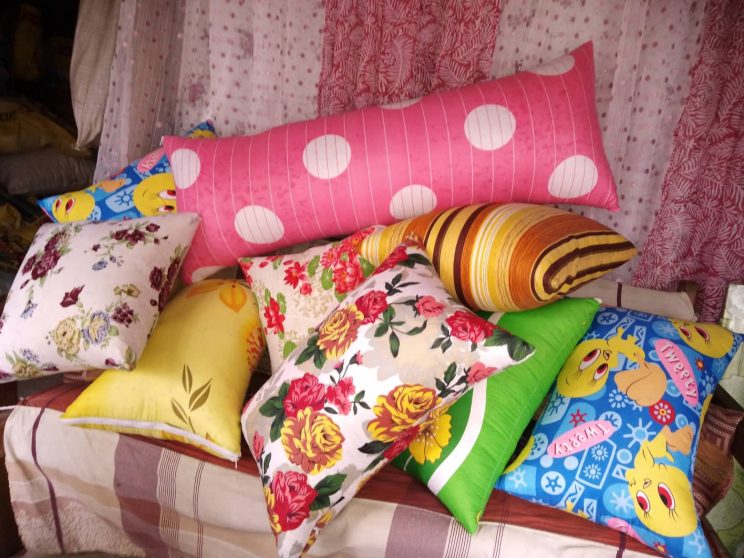 According to the Philippine Fiber Industry Development Authority (PhilFIDA), kapok (Ceiba pentranda) is a soft and slender deciduous tree that can grow up to five meters in height. It is known for bearing pods that contain a large portion of a cotton-like fiber. It is for this reason that kapok is also called silk-cotton tree in other parts of the world. In Cavite, where Rose and her family live, they call the tree buboy.

Contrary to some beliefs, kapok is not native to the Philippines. It is pantropic, meaning it thrives in all tropical regions of the planet. According to the Global Biodiversity Information Facility, the tree is native to Mexico, Central America, the Caribbean, and West Africa. It appears in the flag of Equatorial Guinea, a country on the west coast of central Africa, and is also a national emblem of Guatemala and Puerto Rico. 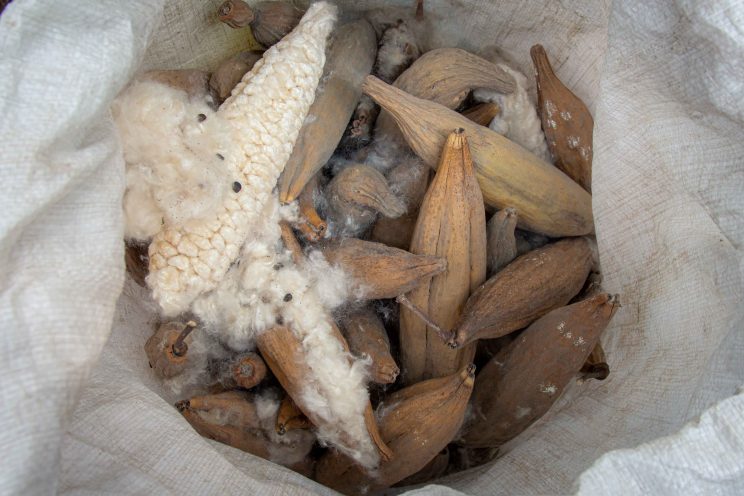 Rose grew up around kapok pillows

Rose has been creating pillows out of kapok fiber for 15 years now, but she’s known about the use of kapok fiber since she was young because her family from Santa Ana, Cagayan use kapok fiber for pillows. She can’t recall why they had pillows made from kapok fiber, but it is just how it came to be for her. “Basta nagkaisip ako, ganyan na (I just grew up with kapok pillows around me),” Rose said. 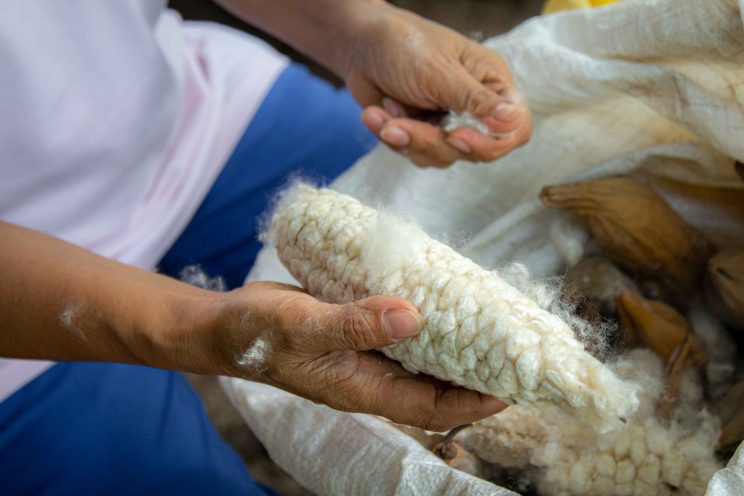 Rose only started making pillows out of kapok fiber later in life. Rose and her family were already living in Cavite when her husband’s co-worker gave them three sacks of kapok pods. Knowing what kapok could be used for, Rose unpeeled the pods and used the fiber as stuffing for new pillows. She created pillows for their bedroom and living room, and even for their mattress.

They didn’t start selling pillows until later. A co-worker of her husband directed them to the location of another kapok tree, which they also harvested from. Since they already had enough pillows, she sold the additional pillows to her friends. 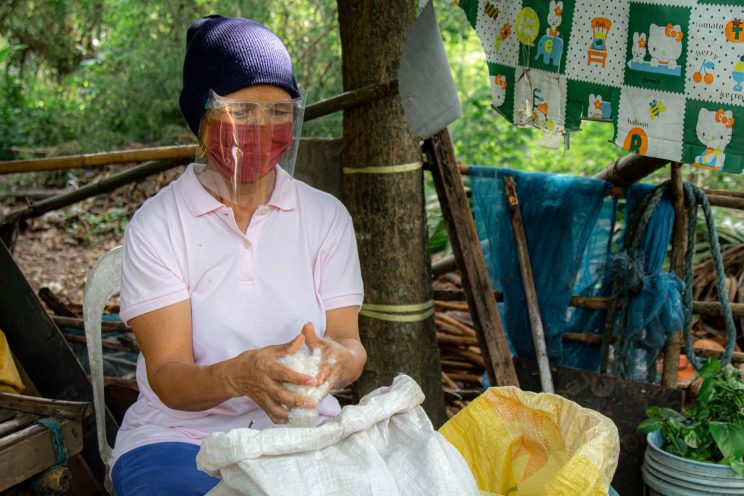 Rose likes to wear a face mask as the fiber tends to float around in the air and sometimes gets into her eyes. (Jerome Sagcal)

Though creating pillows is just a sideline for Rose, she has a few expenses when making these pillows. Since she depends on kapok trees owned by other people, she has to pay these tree owners so she could harvest from their trees. Rose hires a person to help her husband and son climb the trees. Rose also hires a tricycle driver to transport the sacks of kapok pods they collect.

She also has the pillow casings custom-made by a tailor from a local market. She sells pillows in different shapes and sizes. Pillows can be regular-sized, large-sized, or cylindrical. She also sells other types of cushions like throw pillows.

She mostly sells her pillows for P250. “Di ko na masyadong pinepresyuhan… E minsan pampalipas oras lang rin yun, kaya hinahayaan ko na (I don’t charge too much as I only make this pillows in my spare time anyway),” she said.

Making a pillow from kapok fiber

Rose and her family harvest the pods of kapok trees every Sunday from March to April when the pods have become dry and brown.

The trees start fruiting in December but she does not harvest unripe pods as their skin is hard to peel and the seeds are attached to the fiber. She may also choose to harvest pods that are almost ripe as it is easy to remove their seeds. She prefers the brown dry pods as they are easy to peel and can be stored for a long time. 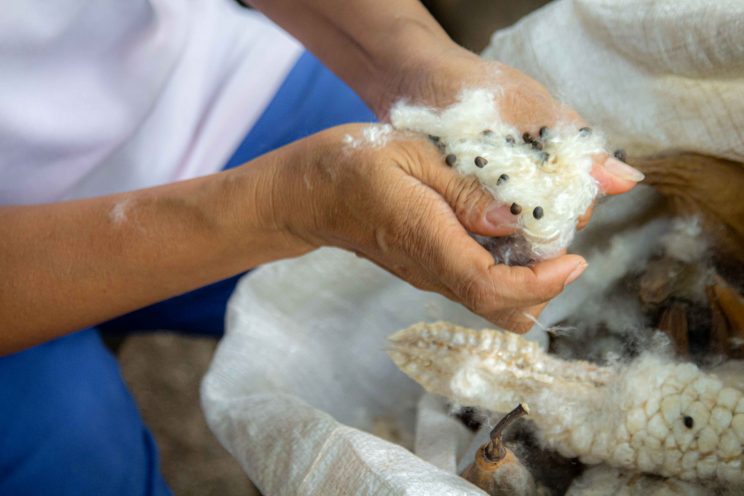 Rose removes the seed from the kapok fiber. (Jerome Sagcal)

Once their yearly batch has been harvested, Rose waits to get an order before she starts making pillows. She posts about her kapok pillows online so she often gets orders and inquiries from her friends. Once she gets an order, Rose needs at least three days to finish one pillow.

Rose explained that unpeeling the pods and removing the seeds takes a lot of time. She also tries to not use fibers that are attached to the seeds. She said that she can still use such fibers, which she considers rejects, but she chooses not to do so as the weight of the seeds might add up and make the pillow heavier. 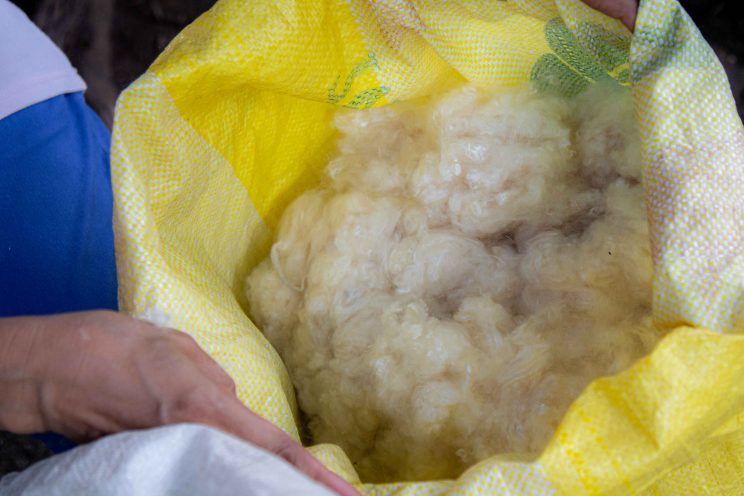 Once the seeds have been removed, she puts the fiber into a separate sack. She said that she needs around 1 ¾ kilo of fiber to stuff one regular-sized pillow. This is equal to ¾ of one sack of kapok pods.

She has to use this much as she prefers to stuff a lot of fiber into the pillow. It is not enough that the pillowcase has been filled as the fiber also needs to be compact inside.

“Kasi pag ka binigay ko sa customer na yung malambot ba, pag napitpit kasi siya, manipis na. Kaya kapag eto naman ay siksik na siksik, punong-puno talaga, pag ka habang ginagamit, lalambot siya (If I give the pillows soft, it will get thinner as it gets used. This is why I compact the fiber inside the pillow so it will get softer as it gets used),” Rose explained. 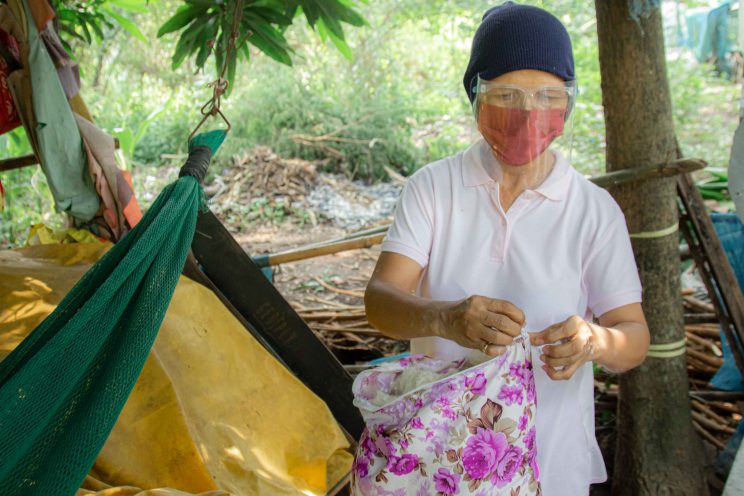 Rose is now 54 years old. Thanks to the sacrifices she and her husband have made, their eldest child was able to finish college and has been working in a bank for six years. Her other two children are also in college. Despite their humble means of living, Rose and her husband have brought good lives to their children. Rose’s instinct and ingenuity to make money have no doubt contributed to making all their achievements a possibility.

Photos by Jerome Sagcal and courtesy of Rosa Barcena.