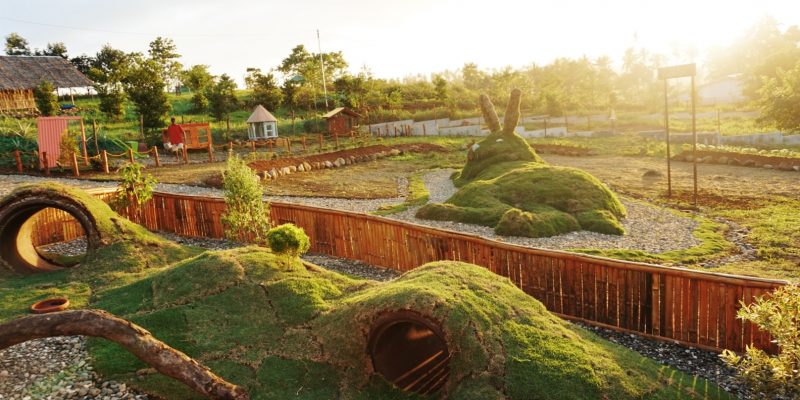 Aerial view of Rabbit Village where a huge rabbit mound named Pablo has been erected.

Rabbiton is an agri-tourism site that is unlike anything else in the country. It is a rabbit-themed agri-park in Pamplona, Negros Oriental with certain parts of the farm inspired by Hobbiton, a fictional setting in the Lord of the Rings universe.

The farm is a sprawling 13.5-hectare land. It offers plenty of activities and opportunities to learn about farming. There are nine agricultural sections on the farm, with most of them having names suffixed with “-ton” to match their Lord of the Rings theme. This adds to the feeling that visitors are exploring various kingdoms when visiting Rabbiton. But before legs turn weak by touring the farm, cellphone batteries may drain faster as well, as visitors can spend hours getting distracted by one Instagrammable hotspot after another.

Rabbiton may look like a rabbit paradise, but underneath its cute facade is a story of how this agri-park survived both the Covid-19 pandemic and Typhoon Odette. Who would have thought that it was only just a few months ago when the farm almost closed. 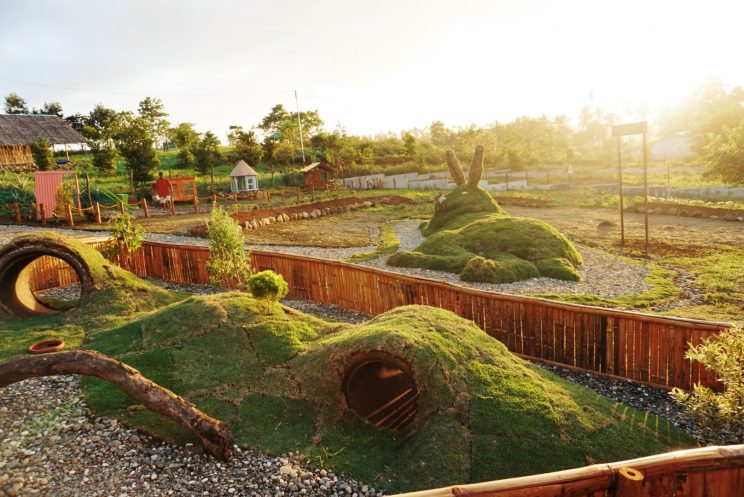 Aerial view of Rabbit Village where a huge rabbit mound named Pablo has been erected.

Rabbiton officially opened just a few months before Covid-19 struck the Philippines. The farm managers at that time, couple Cliff Ballesteros and Katherine Calingasan, were relatively lucky considering that Rabbiton remained open. This was despite most hotels and restaurants being closed at the height of the pandemic.

But despite being open, there were not that many visitors. They even considered shutting down the farm if not for the many employees depending on them during the COVID-19 pandemic. 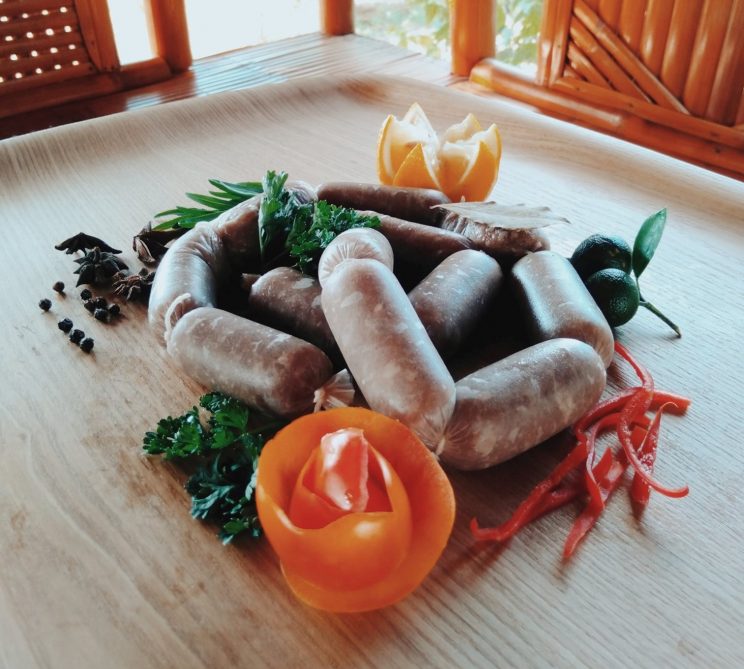 It was during this time that they had to find an additional source of income. They started processing their products and sold them through online delivery. They continue to do so until now. They sell processed rabbit meat such as rabbit sausage and rabbit chorizo. They offer embutido made from guinea fowl meat and processed pork products such as Hungarian herb sausages, smoked hotdog, and ham infused with herbs.

Rabbiton also grows a wide variety of herbs, which they process into tisane, or tea made with botanicals that aren’t the tea plant. Visitors may purchase tisane made from blue pea, ginger, holy basil, malunggay, lagundi, lemon grass, pandan, roselle, tarragon, turmeric, and spearmint. Some of these have been powdered such as blue pea, ginger, malunggay, and turmeric. A lot of these herbs can also be purchased and placed in a pot so visitors can regrow them in their homes.

The Covid-19 pandemic tested Rabbiton’s ability to adapt, but their greatest test has yet to come at that time.

As if the Covid-19 was not enough, Typhoon Odette ravaged the farm in December 2021.

Jonathan Dumont is the only son of Paul and Eden Demont, co-founders of Rabbiton. Growing up in Cagayan de Oro and Bukidnon, Jonathan said that he was exposed to the farming environment.

Jonathan is currently a college student. Prior to becoming the farm manager of Rabbiton, he would visit the farm every summer to get engaged in their livestock business. But it wasn’t only until Typhoon Odette that he fully realized what Rabbiton meant for him. 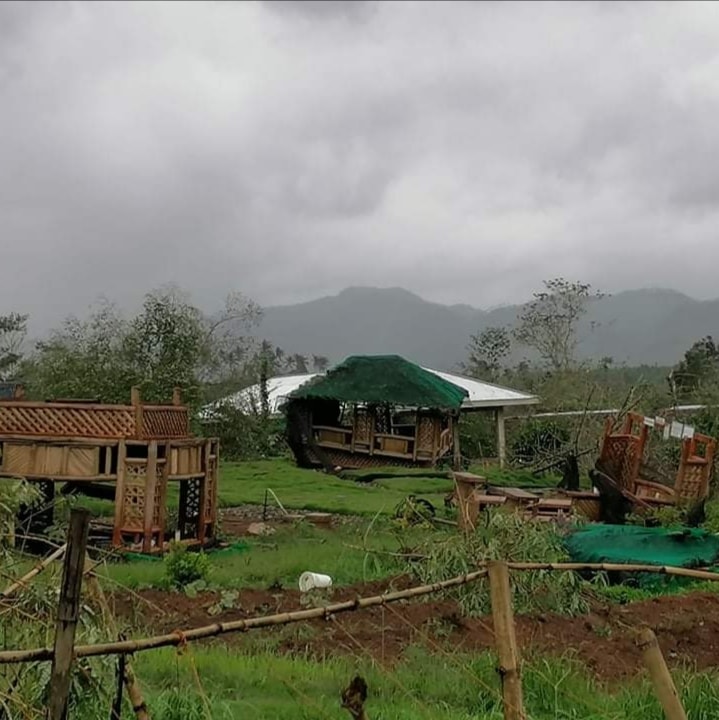 “It was only during Odette… it woke up something in me. A wake-up moment to really help the family business,” Jonathan said.

The day before his December 21 flight, the weather in Negros was calm all throughout the day. Perhaps it was the calm before the storm because it was not until the late hours of 10 p.m. that Jonathan faced what perhaps might have been the strongest typhoon he has ever experienced.

During this time, the top managers present on the farm were Cliff and Katherine. Katherine said that the experience has been traumatic for her as she has not experienced a typhoon that intense.

“Firt time ko makakita ng lumilipad na bahay kubo (It was the first time I saw a nipa hut flying to the air),” Cliff even said.

The wind was at its strongest around 2 a.m. With everyone unable to sleep, Jonathan roamed around the farm with other employees trying to fortify whatever buildings they could save. The storm started subsiding around 4 a.m., letting everyone finally take a breath.

The damage Typhoon Odette left on its trail brought Rabbiton down on its knees. During the storm, a tree had fallen to their chicken house while an acre of land where they grew roselle (Hibiscus sabdariffa) was wiped out. 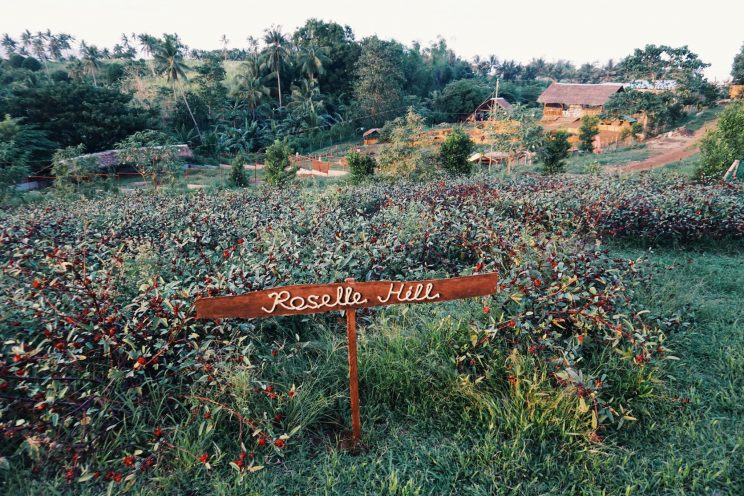 A production area for rosselle was wiped out after Typhoon Odette.

“Everything was really destroyed. Like in my mind, we were going to close,” Jonathan said.

From cows to rabbits

Before transforming into a sprawling agri-park, Rabbiton started as a dairy farm in 2012. The co-founders of the farm, Paul and Eden Dumont, developed the land to raise livestock and poultry animals. It was not until one Christmas trip to Quebec, Canada that their farm turned to a different trajectory.

The Dumont family went to a restaurant where they ordered a rabbit meat dish. Jonathan said the dish clearly looked like rabbit thigh and that the restaurant made no attempt to hide the meat. They were hesitant to take a bite at first but later found that the dish did not taste different or unsettling.

It was during this dinner that Paul Demont had an idea. This dinner was five years ago. Around this time, rabbit meat production wasn’t as common as it is now in the Philippines, so Paul thought it was a good idea to get into rabbit production once they return to the country. 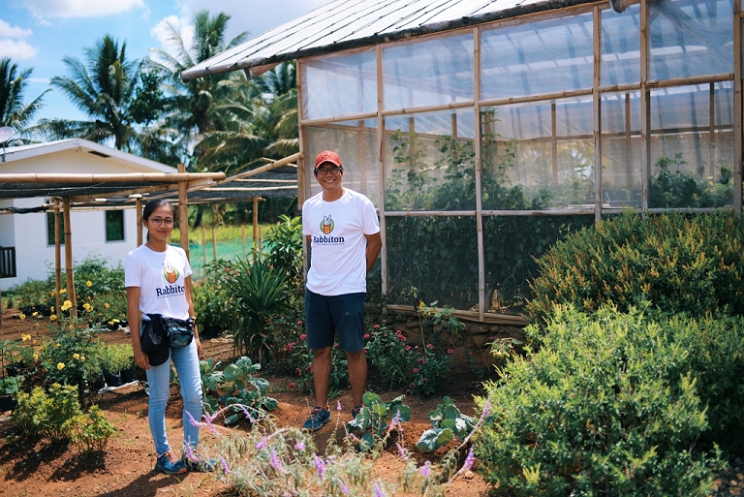 Katherine Calingasan and Cliff Ballesteros oversaw the expansion of Rabbiton.

Cliff and Katherine developed Rabbiton into what is now. Their main attraction is the Rabbit Village, where they have erected a giant rabbit mound called Pablo, which was named after Peter Dumont. There is also Shire Hill, a wide area where rabbits freely roam. There are hobbit house-inspired structures around Shire Hill where rabbits can shelter in. The area is enclosed by a knee-high fence so visitors can freely access the area to interact with or feed the rabbits.

The area for rabbit meat production is separated. They call it the Rabbit House, which is a production house the size of two basketball courts. They breed a variety of rabbit breeds for meat such as Pure New Zealand, California Wite, American Blue, American Sable, American Chinchilla, and Flemish Giant. They also breed smaller rabbits such as Lionhead, Angora, and Rex, which are mostly raised as pets.

Shire Hill is a free-range area inspired by the aesthetics of Hobbiton.

Jonathan shared that they are aiming to produce a Rabbiton line of rabbit meat by crossbreeding the Flemish Giant and local New Zealand. Their aim is to raise heftier rabbits that can be harvested in as early as two months instead of waiting for three to four months. This would cut down on their production time and reduce the amount of feeds they need.

Other than the areas of Rabbiton dedicated to rabbits, there are also other portions of the farm used to grow crops and raise livestock.

There is the Herbiton, which is a 2,400-square meter garden with around 150 herbs. A tour guide would go through all of the herbs, explaining their culinary and medicinal uses. Nipa hut cottages locally called “payag” surround Herbiton. Visitors may rest here to take their lunch free of charge.

Visitors may also harvest eggs at Chickiton, where more than 200 chickens roam freely. There are around 20 breeds of chickens in Chickiton which have originated from different countries. If a visitor had collected all the eggs from all the breeds, they would come home with a basket filled with eggs resembling the colors of the rainbow. Jonathan shared that some visitors wonder if they paint the eggs, but assured that all colored eggs are naturally produced by their chickens. 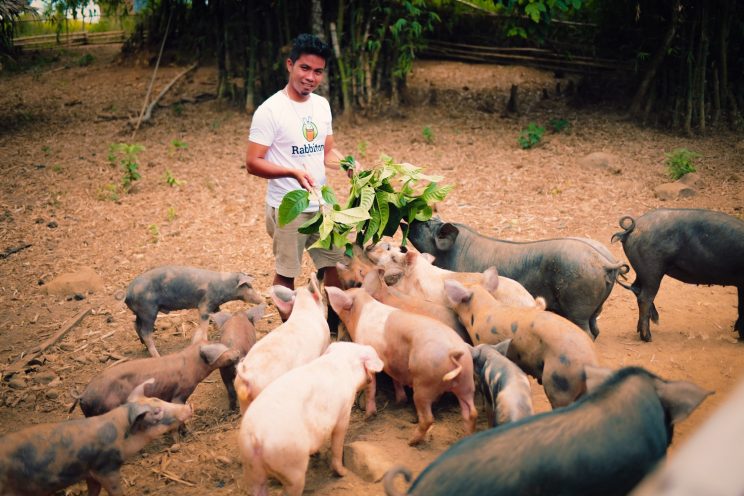 Three breeds of pigs are being raised in Piggiton.

The farm also produces pork at a section called Piggiton. They raise three breeds of pigs, namely Landrace, Large White, and native black pigs. There is also Sheepiton where visitors may interact with Dorset sheep, a breed that grows their wool downwards. Jonathan said that they plan to raise more Dorset sheep so they could also produce mutton.

There are sections of the farm wholly dedicated to tourism. There is the Horsitton, an oval track that visitors may explore while riding a horse. There is a landscaped area in the middle of the trail where a visitor may pose with their rented horse. 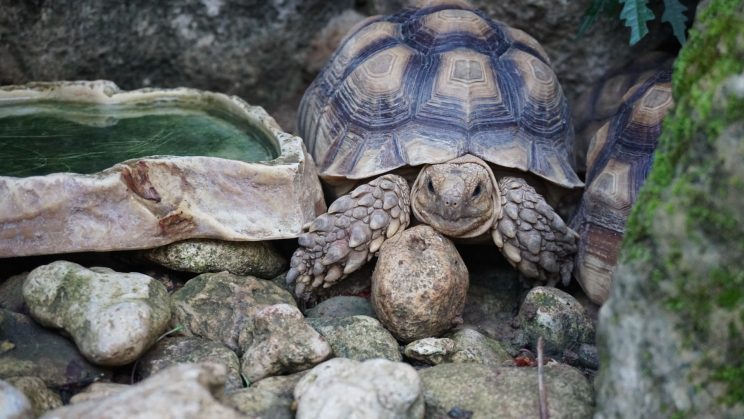 Turtleton houses a large species of a tortoise called Sulcata.

There are also tortoises on the farm, particularly the Sulcata, a species of turtles that can grow so big that Jonathan said a small kid could ride a full-grown Sulcata. Jonathan had initially kept these tortoises as pets but had moved them to Rabbiton as they’d gotten too big for their terrarium.

Visitors looking to stay longer on the farm may also rent a nipa hut or an air-conditioned room.

Much has been said about the resilience of Filipinos, but it took courage on the part of the Dumont family to continue with Rabbiton after the back-to-back blows of the Covid-19 pandemic and Typhoon Odette. Had they thought of Rabbiton simply as a business venture, Rabbiton may as well no longer exist now. It was through the community they made that Rabbiton remains open despite the odds.