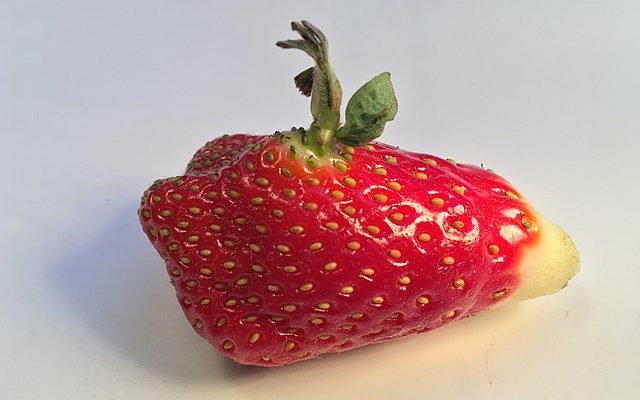 Photo by Wolfmann from Wikimedia Commons.

There is this rare phenomenon wherein seeds germinate while they are still enclosed in or attached to their parent fruit. The result may look unpleasant in some instances. A tomato fruit going through this may appear as if shoots are growing from inside it, piercing out of its skin in a visually disturbing effect. It may look like the fruit is suffering from a parasite or a disease, but this is actually a rare harmless occurrence called vivipary, derived from Latin words meaning “live birth.”

Fruits contain a certain hormone that suppresses them from prematurely germinating. Vivipary happens when these hormones run out before the seed is removed from its parent fruit.

It may be easy to assume that this is just an anomaly, but some plants benefit from vivipary. Mangrove trees, which grow on the shore, reproduce more effectively when their seeds have already germinated before falling into the water. Such seeds would take root more easily rather than being just washed away into the deeper parts of the sea.

Vivipary also happens by pure chance, especially when fruits are left in storage. This phenomenon has been observed in strawberries, tomatoes, peppers, pumpkins, avocado, and citrus. It has also been seen in corn and other similar plants which hold moisture inside their husks. Such crops provide a dark and damp environment for their seeds, thus enabling the perfect condition for them to sprout immaturely.

If a crop has seeds that prematurely sprout, there is no reason for panic. The fruit can still be safely consumed despite how unsightly the fruit may be. For those bothered by the look of the fruit, the sprouted seed can simply be discarded before eating the fruit. Producers may not want to sell fruits with seeds that have sprouted inside them, but they can replant the fruits so they don’t go to waste.