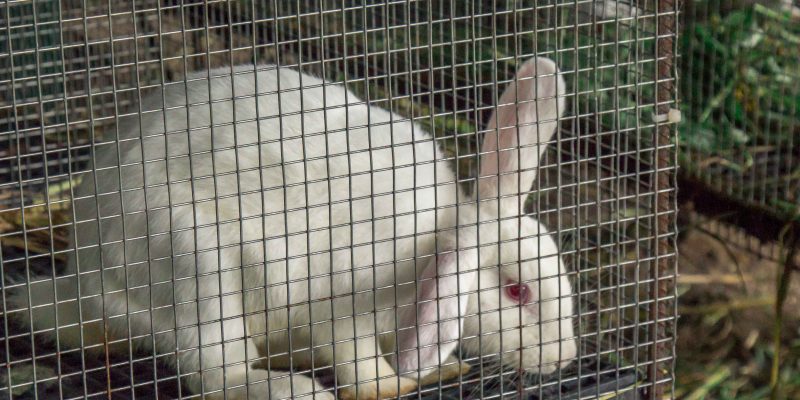 A rabbit on a farm managed by Cliff Ballesteros and Katherine Calingasan.

Much has been said about the potential of rabbit meat. For consumers, rabbit meat is a healthy alternative to pork, chicken, and beef with its low fat content. For producers, experienced rabbit breeders will talk about the ease of getting into business with how fast and easy it is for rabbits to breed, as well as the minimal amount of space needed to get started.

Despite all its selling points, there are drawbacks surrounding rabbit meat production that may convince other farmers to stay away. Though acceptance of the meat is increasing in the Philippines, a lot of people remain concerned about consuming this meat. Most people still see rabbits as cute innocent pets, which is why a lot of people do not feel right about turning rabbits into a commercial meat source.

Another issue is that even though a person has been convinced of the benefits of eating rabbit meat and even wants to make it part of their weekly diet, its high cost per kilo might encourage them to not bother. With rabbit meat costing around P400-P500 per kilo, average Filipinos find it hard to include this meat on their dining table regularly.

Agriculture Online spoke with three rabbit breeders to ask what they are doing and what could be done to address the issue of the unpopularity and the high market cost of rabbit meat.

Influence more farmers to get into rabbit meat production

For Cliff Ballesteros, co-founder of KC Rabbitry, a small rabbitry based in Amadeo, Cavite, they have been conducting workshops since 2011 to get more farmers involved in rabbit meat production. They aim to continuously supply farmers with information about rabbit meat production, as well as to initiate awareness campaigns on the meat.

Cliff believes that with more rabbit breeders, there will be more rabbit meat in the market, thus lowering the price of the meat.

Cliff noted that though the price of rabbit meat has not gone down, it has matched the price of pork and beef.

Cliff added the need for a national rabbit breeders’ group to suggest or regulate a standard price for rabbit meat.

“Kasi sa ngayon, sa tingin ko, parang sobrang konte pa ng breeders and halos lahat sila ay nasa backyards, so konte yung mga players na malalaki (I think that there are not enough breeders. Most of them also raise rabbits in their backyard, so there are only a few big players in the rabbit meat industry),” Cliff added.

Katherine Calingasan, the co-founder of KC Rabbitry and wife of Cliff, also noticed the fragmentation of rabbit breeders in the country.

“Konte pa lang yung players na nakaenter na sa indstry. Watak-watak pa yung groups. So nangyayari, parang nagchecheck lang [ang breeders] sa intenret [kung] magkano price niya. Wala tayong parang sa DA (Department of Agriculture), diba may price check para standard na lahat tayo magfofollow na eto yung price range natin (There are only few big players in the industry. As for the groups that exist, they are too fragmented. What happens is that rabbit breeders just consult the internet for the price of rabbit meat. We don’t have like a price check regulated by DA so that rabbit breeders will have a standard to follow),” Katherine said.

Jonathan Dumont is the farm manager of Rabbiton, a rabbit-themed agri-tourism site in Pamplona, Negros Oriental. In Rabbiton, they strive to get more people acquainted with rabbit meat by offering rabbit meat dishes.