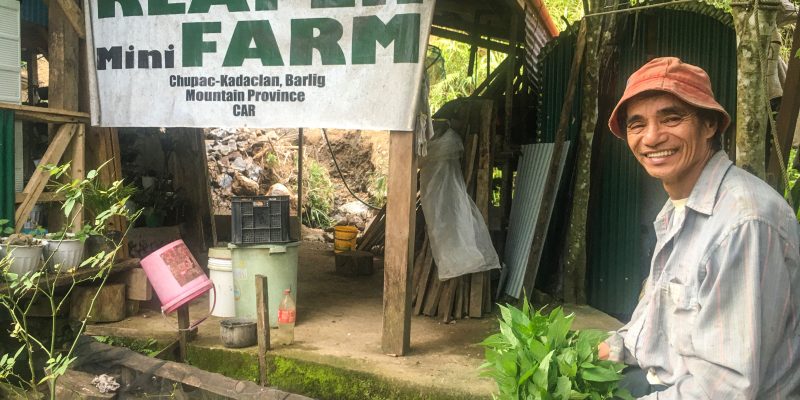 Sitting on a high mountain slope surrounded by lush forests and abundant water sources is a farm like no other. Visitors arriving for the first time may think of it as a jungle, especially with the diverse vegetation and numerous wildlife species such as colorful birds that populate it.

But it is indeed a farm. As the passionate owner aptly puts it, it is a jungle farm.

Known as REAPER Mini-Farm, this idyllic escape lies in a remote community called barangay Chupac in Barlig, Mountain Province. It is also the hometown of famed Jeyrick Sigmaton, aka “Carrot Man,” a farmer who rose to internet fame after a tourist posted a photo of him carrying a sack of carrots.

REAPER Mini-Farm recently opened itself to the public early this year and has since become a favorite destination for nature lovers and interested learners.

Founder Ashley Lamaton’s vision is to transform the farm into a learning hub of sustainable farming and natural coffee production. As both an advocate for farming and the environment, he aims to involve the local community, especially the youth, in agroforestry.

And mind you, it is also a profitable venture. Read on to find out why. 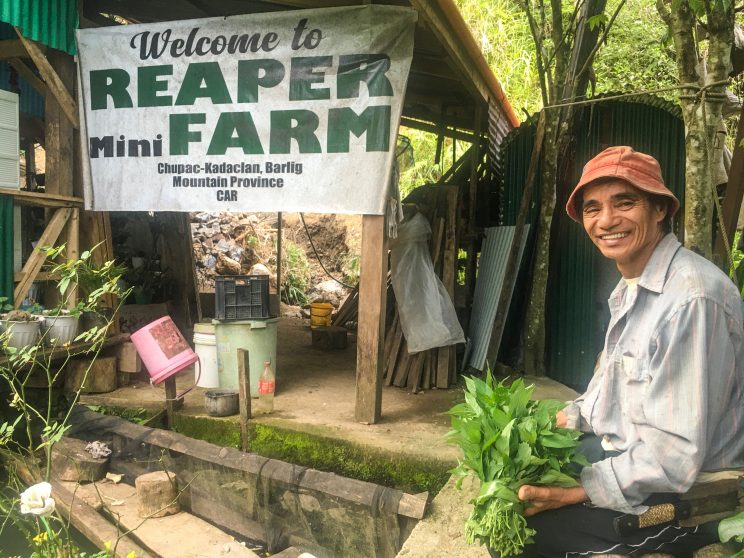 Coffee kicks off the dream

Even before starting REAPER Mini-Farm, Lamaton was already a recognized and multi-awarded farmer. He first started planting coffee in 1996 on Mountain  Province’s fertile slopes, integrating them with the existing forest.

He chose coffee as the main crop because he knew this will also help in maintaining ecological balance in the area. “The river that feeds the Magat Dam in Isabela comes from our mountains, so there must be activities to preserve our forests, one of which is coffee planting. That is because coffee grows under the forest,” shared Lamaton.

According to the Department of Environmental and Natural Resources (DENR), Barlig is the last ecological frontier of Mountain Province, with dipterocarp and mossy forests covering more than 85% of the area. These are important wildlife sanctuaries and are also the major watershed of numerous river systems. The richness and diversity of Barlig’s forests inspired Lamaton to take on a sustainable farming approach through coffee planting.

Arabica Coffee is the variety grown since his farm lies at an elevation of around 1200-1400 meters above sea level. The high elevation has a colder climate, making it ideal for the production of premium coffee which are sought by high-end markets.

Lamaton mentioned that he sells his coffee to a Japanese buyer for at least P500 per kilo. He added that the prices of his coffee could go higher when it reaches a grading score of at least 86. A coffee with that score and above could fetch up to 4000 pesos per kilo or higher in the world market. These are considered specialty coffee.

“The latest grading score of my coffee is 83.5 and we can increase this by improving our practices and with support from private institutions,” said Lamation. He also mentioned that he is collaborating with Echague State University (ESU) in Isabela to conduct research on the improvement of coffee quality.

One of Lamaton’s clients, a Japanese national, took him to coffee farms in Indonesia, East Timor, and Malaysia for him to learn the areas’ best practices, which he can apply on his farm.

Government agencies have also provided technical support during the initial years of his coffee project. However, he cited that there should be more support and encouragement from local authorities, especially on the marketing side of coffee.

As of now, only few farmers plant coffee since there is a lack of financial and technical support from relevant agencies. 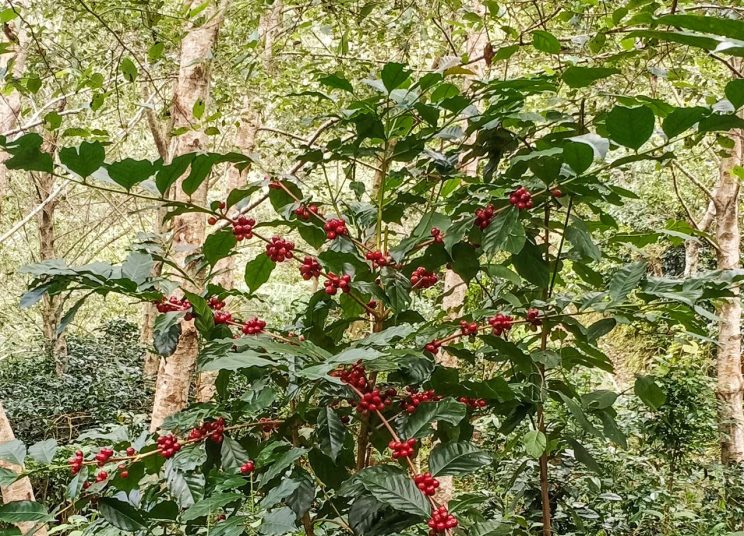 REAPER Mini-Farm contains hundreds of Arabica Coffee trees, known for their aromatic and flavor- rich cherries. Arabica Coffee is the most prized variety of coffee. (Maches)

With Lamaton’s coffee already bearing cherries, he started developing a site near his house and called it the REAPER  Mini-Farm. So, what’s in the name?

For Lamaton, the name of his farm captures his advocacy of reducing carbon emissions while benefiting from the project economically. He wants his farm to generate income but at the same time, protecting the forests and enhancing the local biodiversity.

That is why he did not clear the existing vegetation and instead intercropped coffee and betel nuts, which are the main crops on the new farm. His betel nut harvest alone generates P70,000 per year. Besides, he stated that it has fine roots, thus, are ideal in holding the soil and preventing soil erosion. Other crops grown on the farm are cacao, rattan, bamboo, guava, sugarcane, and different kinds of vegetables.

The farm also has five ponds where he raises tilapia and catfish. He sells these for P150 per kilo and the local demand is high. He also put up a structure where visitors can fish with a hook and cook their catch there for free. If they want to spend the night, Lamaton offers rooms for P300 per night per person. For those who want a more rustic experience, they can set up a tent on the farm itself.

The farm’s entrance fee is only P15 per person, which is very budget-friendly, especially with all the sights and the experiences visitors can have on-site. 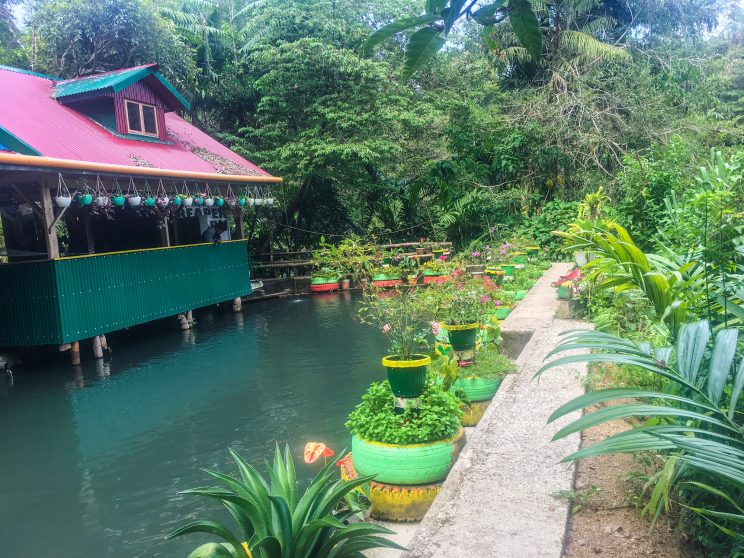 The REAPER Mini-Farm has five ponds where Lamaton raises tilapia, and catfish which he partially feeds with locally-available plants. (Maches)

Lamaton shared that farming is a profitable undertaking but it should be done without causing harm to the environment. This is why he emphasizes that the best way to go is through natural farming, especially with the threat of climate change.

“I don’t use pesticides or chemicals on my farm. I only apply organic inputs to preserve the soil for the future generations,” shared Lamaton.

Relatedly, Lamaton cited that more buyers prefer crops produced through natural farming. For example, his Japanese buyer only purchases organic coffee, thus, he strictly follows the needed guidelines. “Know your market and their specifications,” he added.

Indeed, one does not need to apply synthetic inputs to establish a profitable farm. And that one’s farm can thrive sustainably by sustaining the natural ecosystems. Mr. Lamaton proves that.