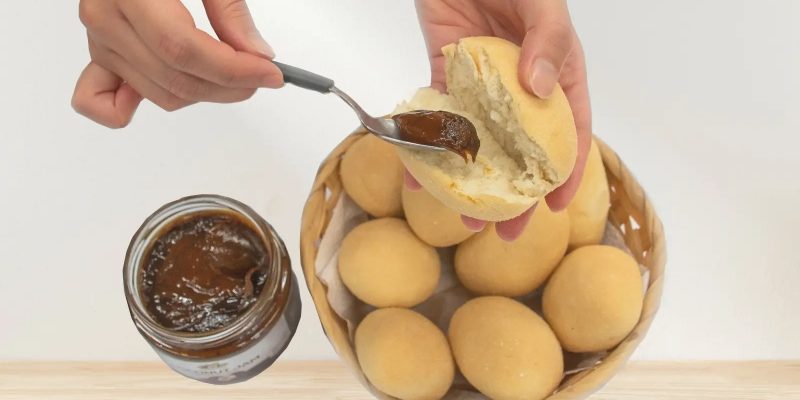 Coco pandesal is an alternative to the typical pandesal. Photo courtesy of the Department of Agriculture.

Coco pandesal is being marketed as an alternative to the typical pandesal. The new pandesal was launched on June 29, 2022, amid a time when Filipino bakers are struggling with the increasing cost of flour. Coco pandesal, therefore, provides a way for bakers to use less of the typical flour as this pandesal is made with 10% coconut flour.

Citing a study conducted by the Food and Nutrition Research Institute (FNRI), Villaruel said that coco pandesal is healthier than its usual counterpart because coconut flour is gluten-free, high in dietary fiber and proteins, and has Vitamin A, as well as essential amino acids.

According to Villaruel, the coco pandesal was conceptualized under the partnership of multiple government agencies such as the Department of Trade and Industry (DTI), the Department of Science and Technology (DOST), and PCA, as well as bakers and coconut traders groups like the Philippine Federation of Bakers Association Inc, Philippine Baking Industry Group, Filipino-Chinese Bakery Association, and Virgin Coconut Oil Producers and Traders Association.

Despite coco pandesal seeming to be a recent development, coconut flour was first studied in the 1970s and was officially launched in 2005.

“In 2005, nilaunch po siya sa national feeding program for the purpose of increasing yung nutritional value na kinakain ng mga bata and also to have a livelihood for coconut farmers. Di pa po eto naging suucessful that time nung 2005 kasi mahal pa po ang coconut flour. And at that time, mura din ang wheat flour (Coco flour was officially launched in 2005 as part of a national feeding program to increase the nutritional intake of children as well as to provide an additional livelihood for coconut farmers. It was not successful at that time because the cost of coconut flour was expensive in contrast with the cheap price of wheat price),” Villaruel said.

The circumstances have changed at present due to ongoing conflicts like the Russian invasion of Ukraine, which has resulted in the global shortage and the increased price of wheat.

There are only a few adjustments that need to be made when preparing coco pandesal as coco flour is hygroscopic, meaning it absorbs more water than other ingredients of coco pandesal.

But being hygroscopic also has its advantages. “On the other hand, naging positive rin ang pagiging hygroscopic because ang [coco] pandesal kung di mo nakain in an hour and lumamig siya , it wil remain  na malambot, di siya tumitigas (Since coco pandesal is hygroscopic, it will remain soft when it is left in storage),” she said.

Coco pandesal is currently sold at Puregold supermarket stores, with a pack of 10 pieces at 250 grams priced at P23.50. Other commercial bakeries will also launch their own version of coco pandesal, according to Villaruel.

“Initially, meron tayong [collaboration with] Gardenia, Marby, French Baker, Cindy’s… We have also made talks with other baker associations. We can conduct business-to-business matching in cooperation with DTI and DA – AMAS (Agribusiness and  Marketing Assistance Service) para po natin matulungan yung ating mga small bakers and our coconut farmers organizations who would want to engage in the business (We have initial collaborations with Gardenia, Marby’s, French Baker, and Cindy’s. We will also conduct business-to-business matching to help small bakers and coconut farmers organizations),” Villaruel said.