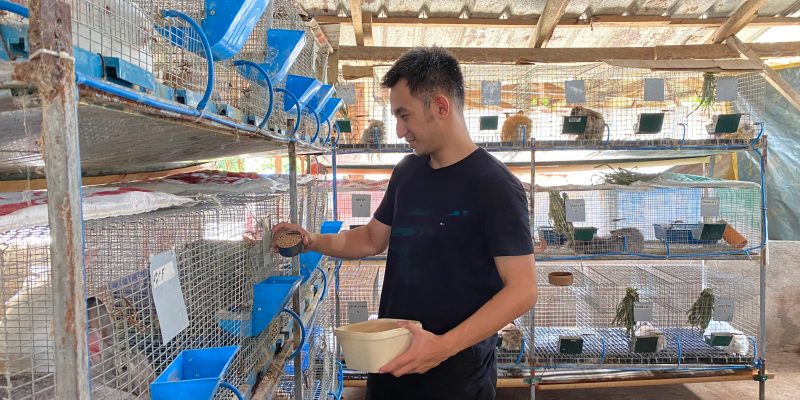 Kirby Bonaobra, one of the owners of Healthy Rabbit PH, feeds the rabbits.

Rabbits are loved and conventionally cared for as companion animals. Unknown to many Filipinos, these adorable mammals are also farmed for their meat and valued for the health benefits they can provide to humans.

Despite rabbit farming being legal and practiced in different parts of the world, a lot of people are still hesitant about or averse to the practice.

This is changing. Some folks choose to explore and grab the potential that raising rabbits have to offer. Among those who fall into this category are four childhood friends, namely Kirby Bonaobra, Charles Chavez, Chino Agngarayngay, and Jason Dam, who also became partners in the rabbit business.

Even though these young entrepreneurs are currently engaged in their respective professions unrelated to agriculture, it didn’t stop them from launching an agribusiness together, notably one focused on rabbits. 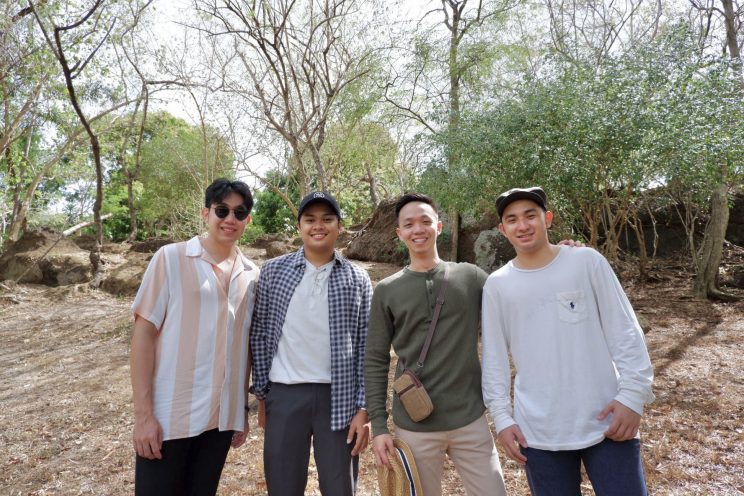 “Our goal is to inspire young professionals to venture into agribusiness, to be a testimony that we can do farming even as a part-time, and to be able to help educate our fellow Filipinos about the benefits of eating rabbit meat..”

From childhood playmates to business partners

These four buddies, all in their 20s today, officially set up their rabbit business in December 2020. They split it into brands: (1) Healthy Rabbit PH, which sells rabbit meat in two forms: lechon rabbit (available in original and Korean spicy) and frozen rabbit meat, and (2) Quadro Rabbiteros, which sells live rabbits for aspiring and existing rabbit breeders. 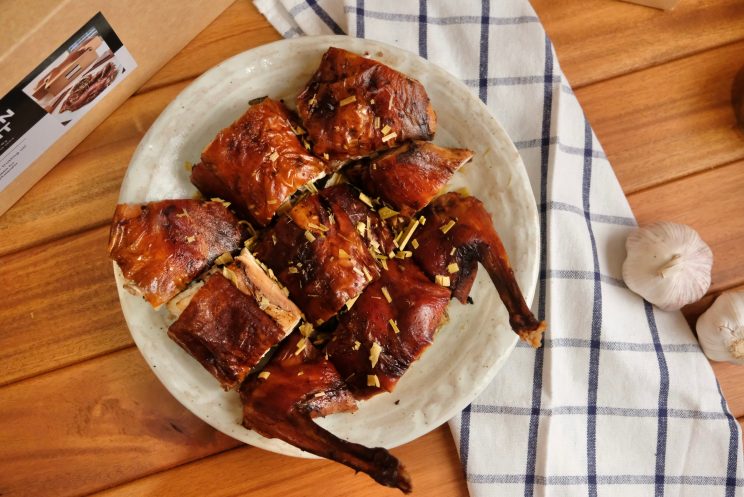 They started out with 24 rabbits in a 40-square-meter rabbitry in Santa Maria, Bulacan. In less than two years, they have increased the number to over 300 rabbits. Sixty-three of those are breeders for meat and live production.

The group’s interest in rabbit production can be traced back years before they initiated the venture. Kirby, the youngest among the owners, for example, attended a seminar on rabbit raising in 2017, which inspired him to run a rabbit farm after graduating from college.

When questioned how they learnt the craft, given their minimal background, their response was: “We started by studying and expanding our knowledge about rabbit raising. We attended seminars in the province hosted by different rabbit farm owners with years of experience in the business.”

Following that, they looked for the right location and individuals who could work for them, especially since they are all based in Manila due to their day jobs. They then began raising their first batch of rabbits.

To ensure that the practices they want for the business are implemented when they are not around, they said, “We created a structure and system regarding the management and monitoring of our roles and responsibilities, so we can make sure that we get to deliver results. We also meet [in person every week] and maintain constant communication daily to address urgent matters. Moreover, we were very particular in choosing the right people who will work with us and manage our farm in Bulacan because it really plays a big part in our business.”

They added, “Given that we only get to visit our farm once a week, we are maximizing the use of technology to communicate with our workers in our rabbitry.”

Today, the founders employ four people to help run the business: the rabbitry caretaker, butcher (for processing the meat—from butchering to packaging), chef (for preparation of rabbit lechon), and a rider for delivery of orders. 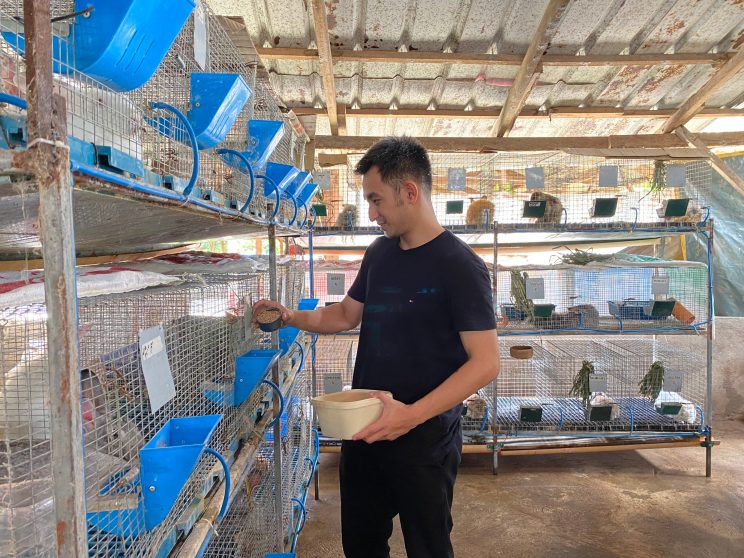 Kirby Bonaobra, one of the owners of Healthy Rabbit PH, feeds the rabbits.

Fostering the consumption of this specialty meat

The continued reluctance of many Filipinos to eat rabbit meat remains a roadblock to the growth of rabbit businesses and the rabbit industry as a whole. The group invests in educating the public about the health benefits of rabbit meat to help overcome this.

They also like to emphasize that the usage of rabbits is not just limited to consumption and cultivation because rabbit pelts or skin can also be processed into products such as carpets, hats, bags, key chains, and the like, while their manure can be used as plant fertilizer. 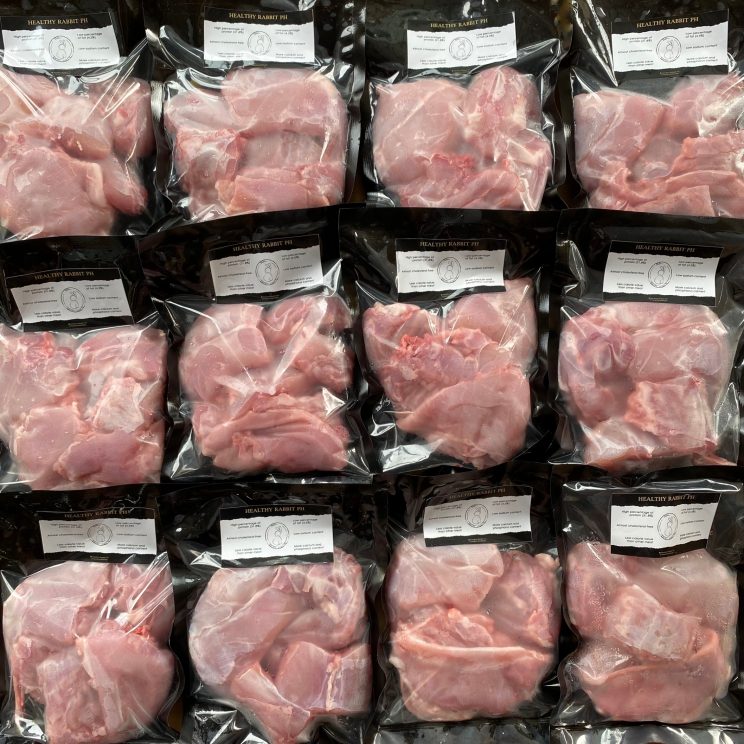 The breeding cycle of rabbits

The doe’s or dam’s pregnancy lasts for a month and then gives birth to an average of five to six kits (baby rabbits) each cycle.

The kits will stay with their mother for a month until they are ready to be given feeds. “The kits would be considered as grow-outs (rabbits aged 2-4 months) when they are separated from the dam, which will eventually be processed for meat or sold as live rabbits.”

What the rabbits eat

In terms of diet, the rabbits are supplemented with (1) feed or pellets as a protein source and (2) forage crops, such as Napier grass, malunggay, and banana leaf. It is also good for the rabbits’ teeth, helping them avoid malocclusion, a dental concern caused by overgrown teeth, resulting in their misalignment or abnormal positioning.

The breeders’ diets are controlled, while young bunnies are fed ad libitum, or as often as they need or desire. The “four rabbiteros” said it is crucial not to overfeed the rabbits because doing so could result in bloating or even death.

The feeding routine, they added, varies depending on the rabbit’s breed and age. 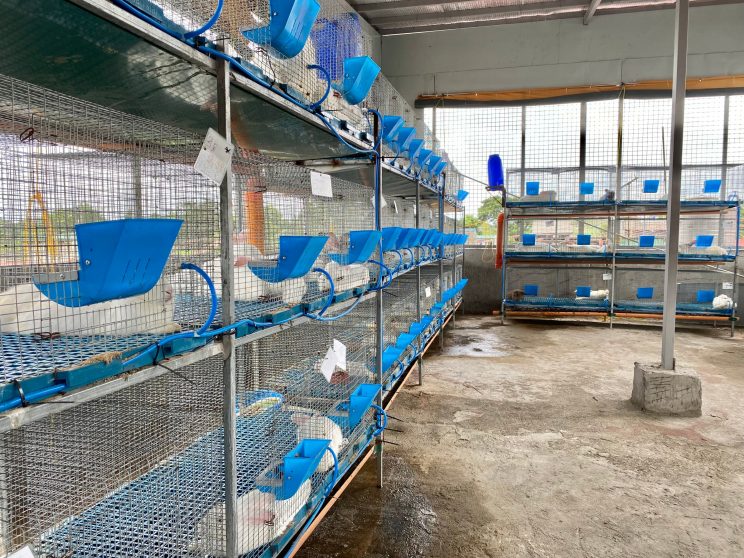 In a 40-square-meter rabbitry, the four young agripreneurs initially had 24 rabbits, and in less than two years, they had grown that number to over 300.

While it may take some time for the general public to accept rabbits as a food source, it doesn’t change the fact that their meat has a potentially huge market on both local and international levels. And people like these young agripreneurs play a vital role in strengthening initiatives aimed at breaking the rabbit taboo in the country.