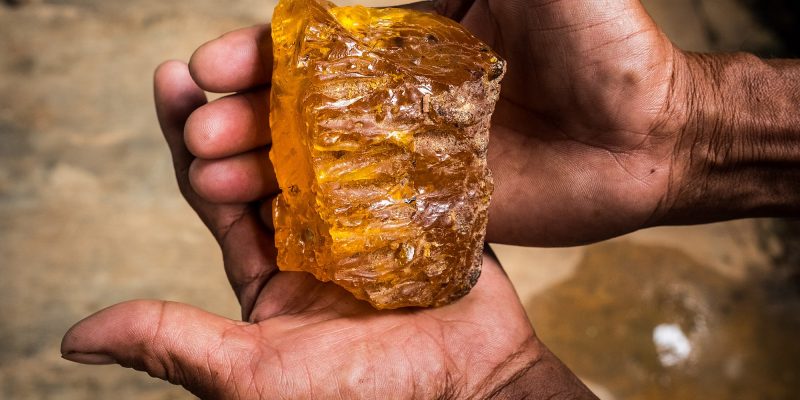 The resin extracted from a native tree called almaciga (Agathis philippinensis) has long been traded by the Philippines under the name of Manila copal. It is used to manufacture varnish, lacquer, and paint. Traditionally, it has also been used to start fires, as an ingredient in making incense, and as a fumigant against mosquitoes.

The trade of almaciga resin is believed to have started as early as the Spanish colonial period with the earliest records showing that the Philippines was exporting more than 1000 tons of almaciga resin per year from 1914-1918. Export of the product has declined since the 1970s with most resin produced now only used locally.

Since the almaciga tree is a threatened species, the cutting of the tree has also been banned since 1987, but it remains a source of income for indigenous people who are permitted to harvest its resin as part of the Indigenous Peoples’ Rights Act of 1997.

They tap the trees to harvest the resin which they sell to local buyers, assemblers, or middlemen. These actors then resell the product to industrial buyers, processors, or exporters. In this complex chain supply, indigenous folk tappers are on the losing end, according to Margaret Calderon from the Institute of Renewable Natural Resources in the University of the Philippines Los Baños (UPLB).

Calderon spoke in a seminar organized by UPLB Forestry Development Center on July 21, 2022 to discuss the almaciga resin industry of Palawan and Davao Oriental, as well as to explain why the selling price is not right for the almaciga resin, especially for indigenous people.

Price is dictated by buyers

The selling price of almaciga resin is affected by the limited number of buyers, which get to decide on the price of the resin.

In the case of Governor Generoso, the price is dictated by its sole buyer from Cebu City. Local tappers sell almaciga resin for P20/kilogram to an assembler that coordinates with the Cebu buyer.

Since tappers in Governor Generoso spend an average of P60,000 per year or P4.93/kilogram, they have the highest profit margin among all actors in the supply chain. But the profit margin dips to negative for tappers if the opportunity cost of doing more profitable work is considered.

“The profit margin of tappers does not cover their opportunity cost in harvesting the resin. They spent a few weeks in the forest in the harvest period and forgo other potential sources of income such as farming or being hired as a laborer,” Calderon said.

The selling price of almaciga resin does not also properly compensate tappers for their labor. They have to travel more than three hours to access almaciga trees and return to their homes while carrying 40-50kg of resin on their back.

Calderona added that tappers have limited information on the value of almaciga resin which forces them to accept the price set by buyers.

As an example, tappers can sell better quality resin for higher prices if they grade or sort their products. This is not done in Governor Generoso while in the case of Brooke’s point, grading and sorting are complicated by the long supply chain. Buyers and middlemen have different grading and sorting systems, resulting in inconsistent prices.

Outside the problems of unfair pricing in the supply chain, indigenous folk organizations also have to deal with government processes. They find it difficult to register or renew their Ordinary Minors Forest Products License which often takes a long time, taking up to two years in some cases.

“There is a high demand for manila copal both in the domestic and international markets. The only problem is the license renewal and permit application in the country resulting in low supply of resin in the market even though there is an abundant supply of resin in the forest,” Calderon said, citing one company that engages in buying almaciga resin.

Part of the permit also requires indigenous folk organizations to conduct an inventory of almaciga trees in their area. This makes the process costly, which in turn forces tappers to borrow money.

A 2021 order from the Department of Environment and Natural Resources sought to fix these issues. A permit now lasts for five years instead of one. Inventory of almaciga trees must now also be done by the city or provincial environment office instead of indigenous folk organizations.

Solutions to the issue

Calderon highlighted possible solutions to resolving the unfair pricing of almaciga resin on the level of tappers. Calderon suggested raising the selling price of resin to P24/kilogram to account for the opportunity cost of harvesting the resin.

Calderon acknowledged that it is not always effective or efficient to commend prices, which is why the prevailing prices will still depend on negotiation. This is why the organizational and financial capacity of tappers must be improved so they can negotiate fairer prices with buyers.

For buyers, they can adjust to higher prices from their suppliers by marketing their products as made with natural additives. “Some of the industrial users are big corporations in the paint and varnish industry. One buyer even takes pride in having taken great strides in protecting the natural environment and communities where they operate, so might as well walk the talk,” Calderon said.

Outside the almaciga resin market, tappers are competing with suppliers of similar materials like the Manila elemi, West African copal, kauri copal, mar, and synthetic resin. To address this issue, Calderon suggested that tappers may consider engaging in value-adding and processing activities to increase the selling price of the resin.

Calderon noted that companies are open to buying more resin from local sources. Some companies source additional resin from neighboring countries like Indonesia due to insufficient local production. With most almaciga trees still unutilized by indigenous folks, there is a feasible opportunity for growth. If the trade of almaciga resin is conducted in a way that fairly benefits all actors in the supply chain, this will not only increase local production but also help uplift the lives of indigenous people involved in the trade.

The information provided here was taken from a seminar entitled “The Price is NOT Right: The Case of Almaciga Resin in the Philippines” held on July 21, 2022 and organized by the Forestry Development Center in partnership with the Institute of Renewable Natural Resources of the University of the Philippines Los Baños.