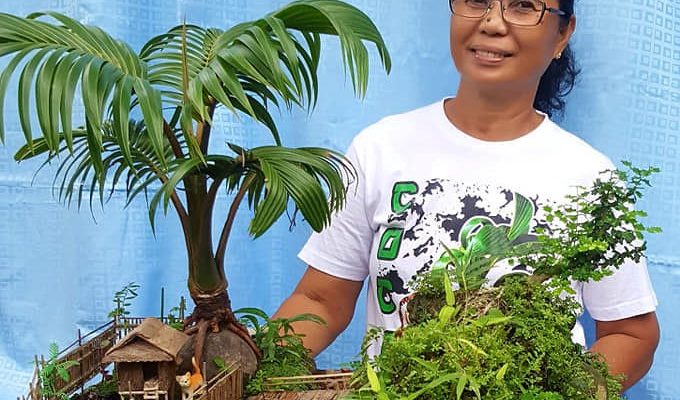 Coconut trees have a lot of uses. Another thing we can add to its long list of useful applications is as a material for coco bonsai.

This is an emerging form of bonsai that uses coconut seedlings. The shell is usually husked to reveal the seed, which is then incorporated into the design. The seed can be completely or partially buried in the ground and may even be suspended mid-air. The bonsai’s shape is maintained by removing the topmost layer of its stems so its leaves and stems do not grow further.

There are a lot of styles in designing a coco bonsai. As a form of art, there is virtually no limit to what human creativity can allow.

Glenn Olis, a coco bonsai artist from Hagonos, Davao del Sur and a Youtube content creator, shared to Agriculture Online some of the common and not-so-common styles of coco bonsai. Other coco bonsai artists such as Chit Bisnar from Marinduque and Niño Rabino from Negros Occidental also gave input on certain styles they have done before. 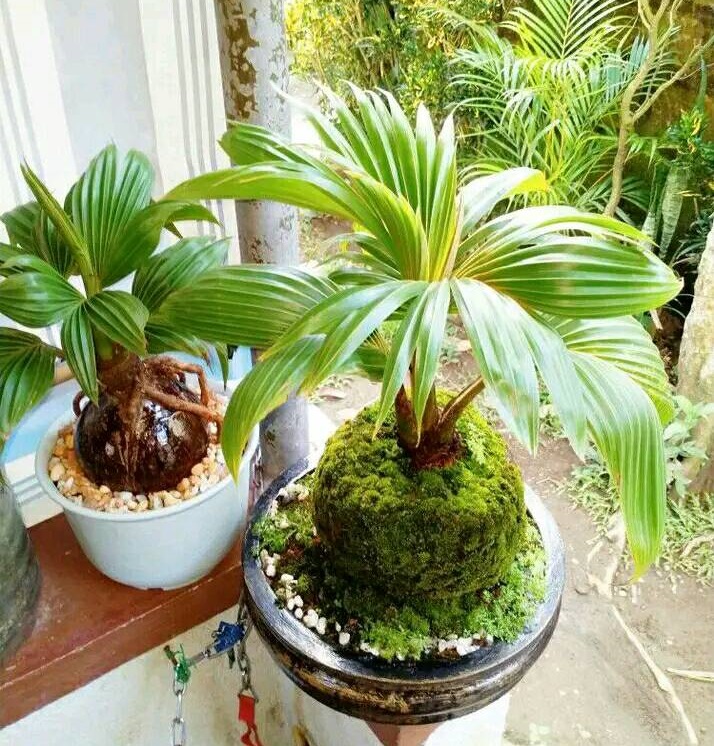 When making coco bonsais, the coconut seed is incorporated into the design. For this basic and easy-to-replicate style, the seed is partially buried in the ground.

The seed was planted directly on the container pot. Some versions of this style do not even require the removal of the coconut husk. Once the seedling has grown, additional soil and moss can be used to cover the seed to improve its look. Another option is to varnish the seed.

Glenn said that this is an easy way to grow and style a coco bonsai. He even recommends it to beginners who want to try out making coco bonsai. 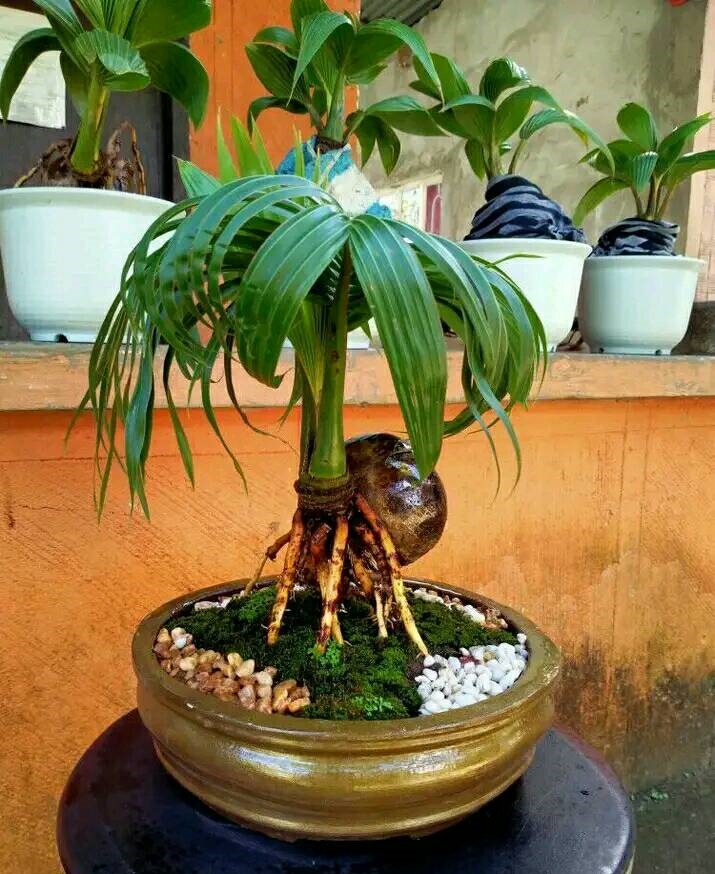 An exposed coco bonsai refers to when the coconut seed is exposed as part of the design. This is accomplished by placing a coconut seedling in an extension pot, which would then be placed on top of a pot. The container pot is not exactly a pot per se. It is simply a wrapping material so that the soil covering the coconut seed does not collapse. Over time, the roots of the seed will grow into the soil of the actual pot. When this happens, the extension pot can be removed, along with the soil inside it, thus exposing the seed. The exposed roots can then be trimmed while the seed can be varnished to improve the overall look. 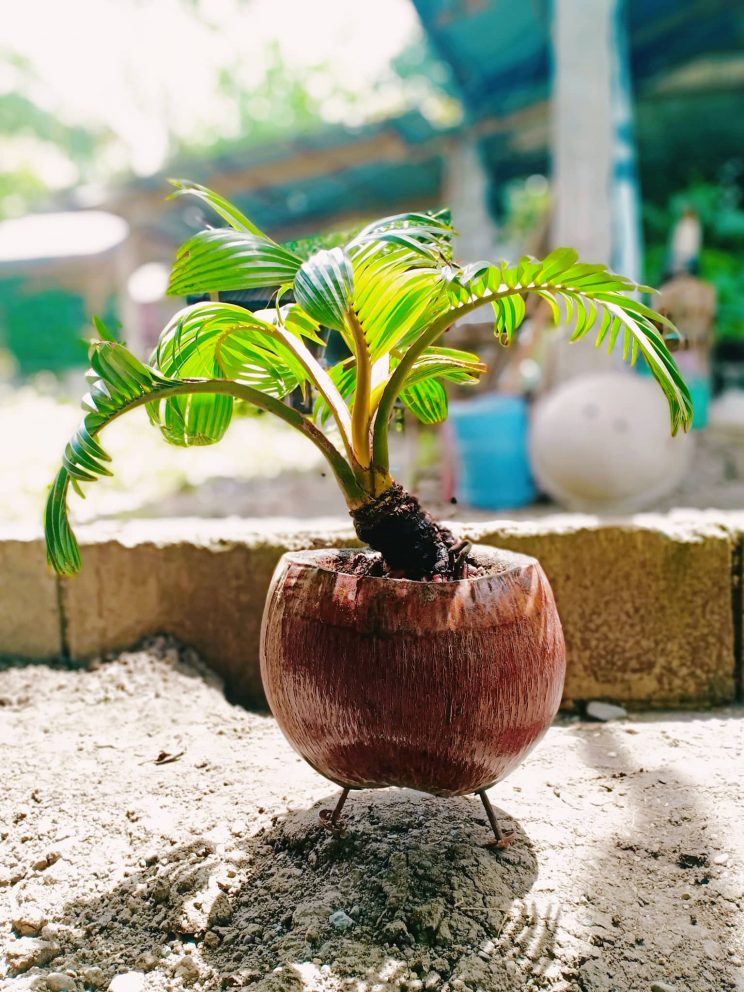 A potless coco bonsai retains its coconut shell. Stands can be inserted on the bottom of the coconut shell to keep it in an upright position. One important feature of this design is the absence of roots. Glenn noted that this type of coco bonsai should not have its bottom parts exposed to water as it would trigger the growth of roots.

For this style, the top part, where the seedling starts growing, is removed. It is up to the artist how much of the coconut shell they want to be removed, but Glenn noted that the plant is watered through this exposed part. 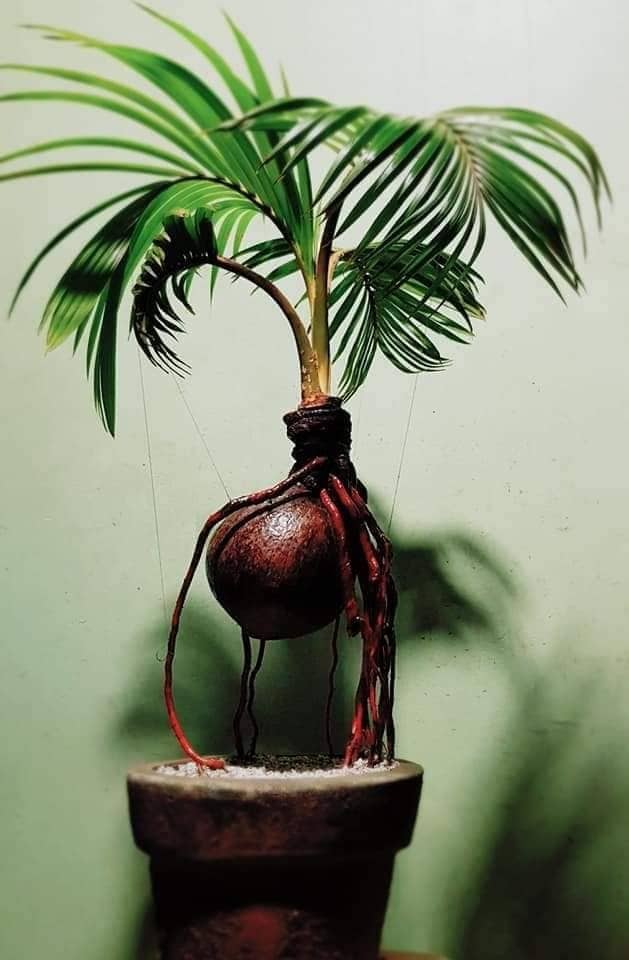 Coco bonsai with elevated roots seem to defy gravity. Most of the visual weight of its form is concentrated on top while its base visually appears unstable, being only supported by flimsy roots. 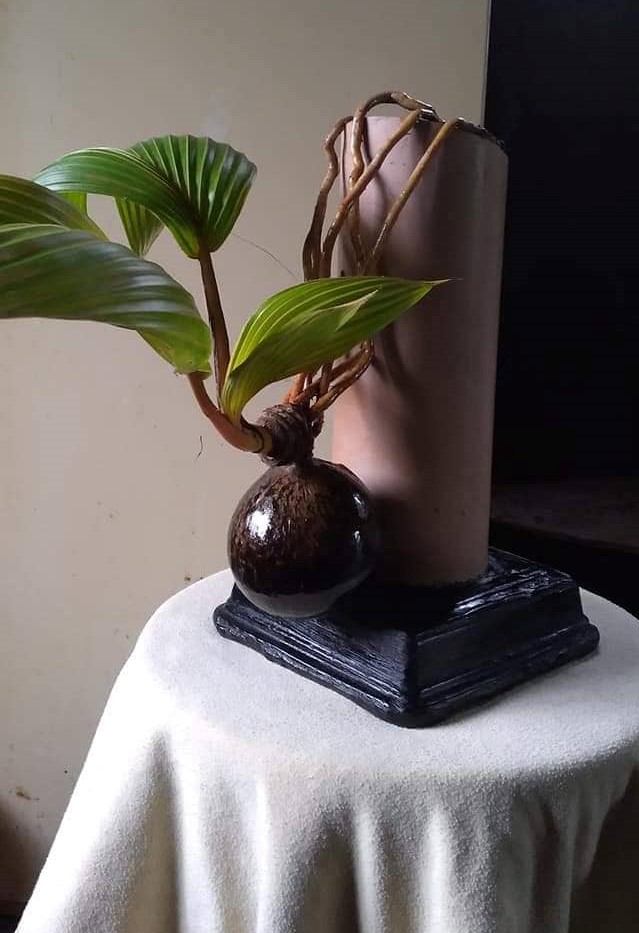 Cascade is a style of coco bonsai, similar to typical bonsai, wherein the plant grows downwards to the point that it dips lower than the level of the pot. Niño, mentor of Allan Ilar, the artist of the bonsai pictured above, said that to create a cascade coco bonsai, the seed is first grown on an extension pot. The seed should be positioned at a relatively high level so the roots grow longer. After seven months, the seed is repositioned to its desired spot and then repotted, but with the roots exposed. 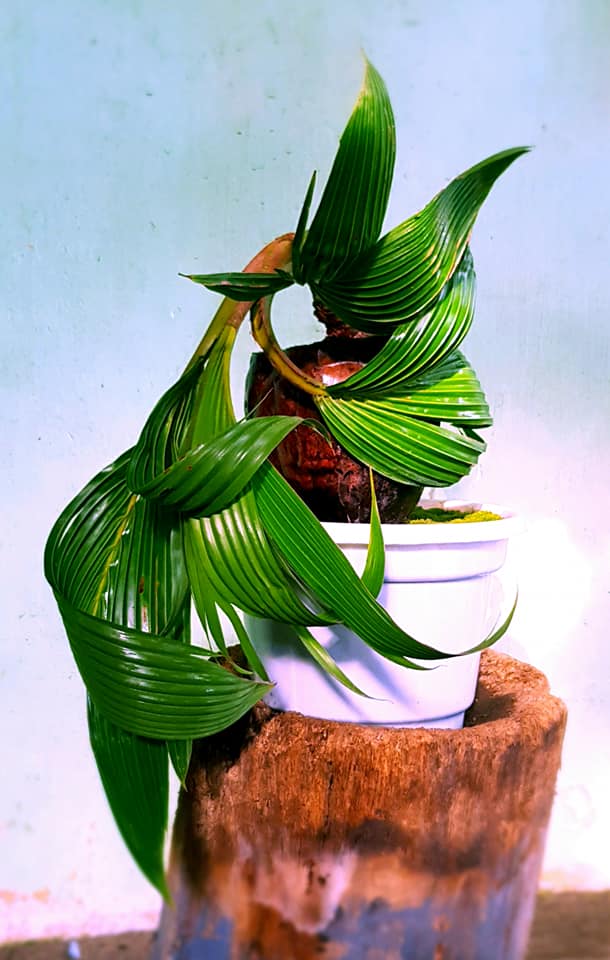 Dreadlock coco bonsais have leaves that curl heavily. Glenn said that some coconut seedlings in the wild already have leaves that grow this way but a seedling can also be manually grown to look this way. Niño, who owns the bonsai pictured above, said that to achieve this look, he uses five-month-old seedlings and suspends them in an upside-down position. Niño said that the leaves grow towards the direction of the light, so the leaves would naturally curl upwards even though the bonsai is upside-down. Once the desired amount of curl is attained, the coco bonsai is returned to an upright position. Airborne coco bonsai have their seed suspended above the air. This type of coco bonsai is first grown in water media to achieve the desired length of roots. The roots may then be manipulated to achieve the desired effect. This style can be created in a simple manner, but the artist may opt to let their creativity run wild, manipulating the roots in ways that look unnatural but visually interesting. A yamaduri or big hunt bonsai involves the use of a stunted wild coconut tree and reusing it as a bonsai. Glenn describes the yamaduri as a kind of tree that naturally turns itself into a bonsai after it has prematurely stopped growing. He said that harvesting such kinds of trees is a difficult process as the roots can be very sensitive. He recommends digging a root ball for the plant so it can better survive the transplantation. Glenn added that plant owners will need to wait for a few months so the plant can recover before artists can start to work on it as a bonsai. This style involves having a coco bonsai recline against driftwood. Glenn said that the process could take a long time for this kind of coco bonsai. The plant is first grown on a  water medium so that the roots extend to a length long enough to match the length of a driftwood. A rock may also be used for this style, but the form and visual of the rock need to be considered before using it. A dish garden is a collection of plants, rocks, and other ornamental objects arranged on a shallow pot. Bonsai artists can add their coco bonsai to their dish gardens and arrange them in a way that resembles a miniature landscape.

Chit, the owner of the dish garden pictured above, used a mature coco bonsai and transplanted it from its pot to this dish garden. Her dish garden depicts a rural landscape, with the coco bonsai used as a miniature coconut tree behind a nipa hut. On the right side is a tiny mountain which Chit made with soil and rocks. She shared that she likes to collect ornamental rocks so she incorporates them into her designs. She almost made a river in the middle with real water flowing in it. This coco bonsai involves growing a coconut seedling inside a wooden sculpture. Glenn said that artists need to be patient when creating this form of coco bonsais. The bonsai will first have to grow from a water medium until the carving has been finished. Artists will also need to make sure that the coconut seedling is not damaged during the carving process so they don’t end up wasting their efforts.

The names of the styles mentioned here vary from one bonsai group to another, and even from one artist to another. Besides, categorization beats the point of art. Art is limitless, and the same applies to making coco bonsai. But these styles provide a starting point. Budding artists may take inspiration from these common styles before they delve into their own more interesting designs.

For more information on creating and maintaining coco bonsai, check the Youtube channel of Glenn Olis.