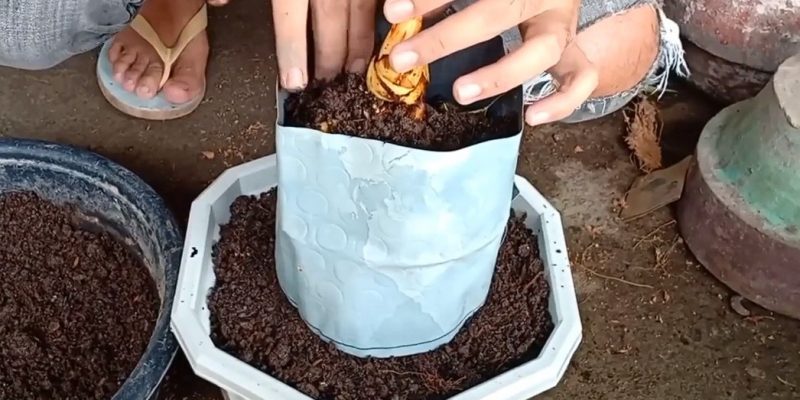 Planting the seedling on an extension pot.

Coco bonsai is a type of bonsai made using coconut seedlings. It is not exactly a bonsai by definition as it does not attempt to look like a miniature coconut tree. Instead, it is a coconut seedling maintained at a certain height and shape, with its seed incorporated into its design.

Glenn Olis is a Davao del Sur-based content creator who makes tutorials about coco bonsai on Youtube. He shared what beginners ought to know about getting started with making coco bonsai. 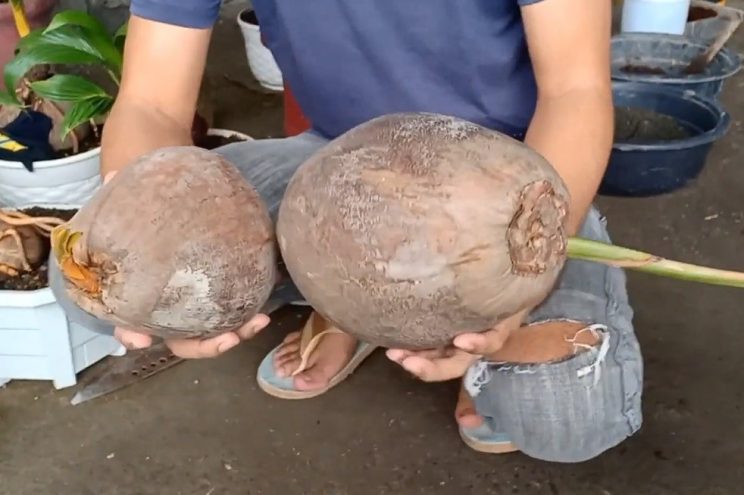 Coconut seedlings to use in coco bonsai.

The first step to making a coco bonsai is to acquire a seedling. Remove the husk of the coconut shell until the seed is uncovered. Afterward, remove the leftover fibrous hair attached to the seed. Soaking the seed in water will make it easier to scrape off the fiber. What will be left is a seedling sprouting from a smooth coconut seed.

An unsprouted coconut seed can also be used. Let the seed grow through a water medium by having the portion of the coconut seed where the seedling will sprout exposed to water. To accomplish this, one could place the seedling on top of a cut-off plastic bottle, fill the bottle with water, and replenish it when needed. After this, it will be a matter of waiting until the desired number of roots grow from the seed before planting it in the soil.

Planting the seedling in an extension pot 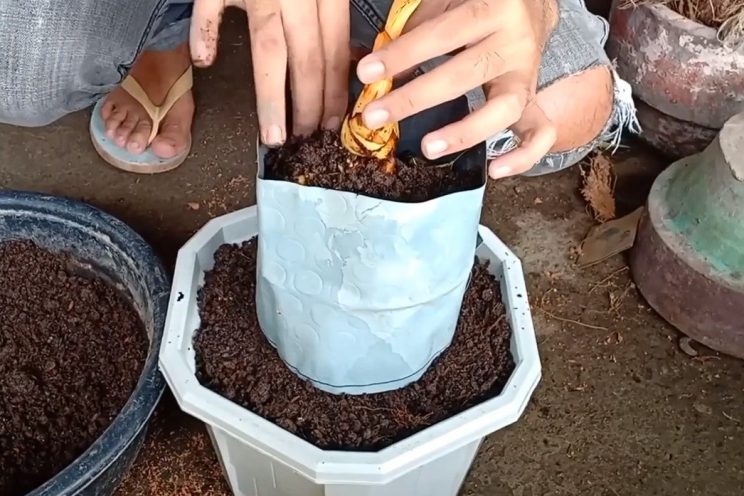 Planting the seedling on an extension pot.

The next step is to plant the seedling. Glen uses a mixture of garden soil, rice hull, river sand, and coco peat as a soil medium. He fills a pot with this soil mixture and puts an extension pot on top of it. An extension pot is not exactly a pot, but rather any wrapping material bent into a cylinder. Using an extension pot allows one to control the height of their coconut seed by putting soil beforehand. The seedling is placed inside the extension pot, which is then filled with soil.

Later on when the seedling has grown, the extension pot and soil inside it is removed. The seed will be exposed at that point, but its root would have already grown into the actual pot. This opens the possibility of various designs such as having the seed being partially buried on the ground or suspended mid-air, depending how high the seedling was placed in the extension pot.

Glenn uses recycled material for the extension pot. He sometimes uses gallon-sized plastic bottles with the top and bottom portions cut off. 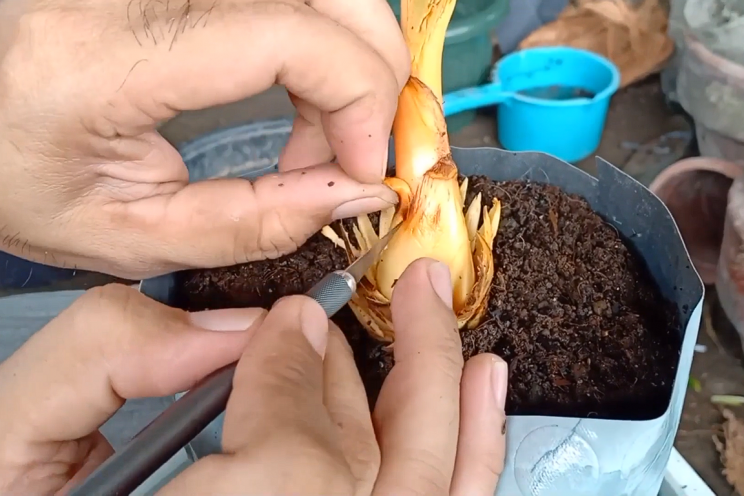 Cutting the outermost skin to retain the size of a coco bonsai.

The seedling would now be left to grow inside the extension pot. It would just need to be maintained by removing the outermost layer of its stem, which coco bonsai artists refer to as the “coco net.” One may use a cutter or scalpel to carefully slice and peel off the coco net. Doing this will prevent the bonsai from growing too quickly. This will also allow the new shoots to spread out instead of clumping together.

As the seedling grows, its stems tend to harden and dry out, so part of maintaining a bonsai is slicing off those portions to improve its look. 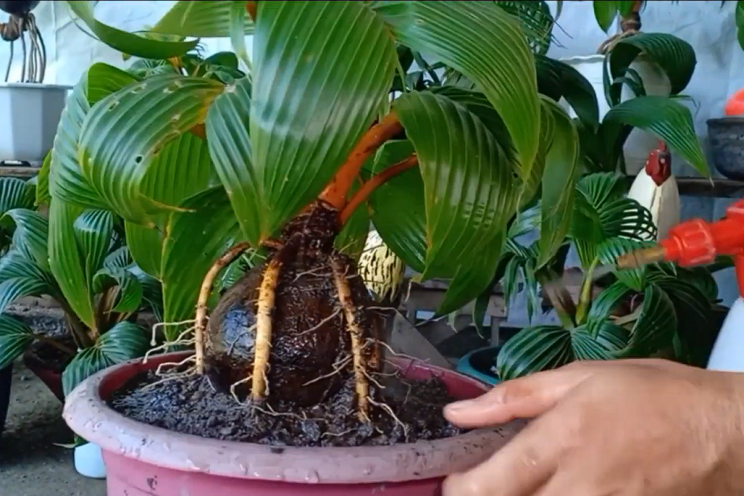 Removing the extension pot and soil inside it will expose the coconut seed.

Once the seedling grows to a desired size and amount of leaves, the extension pot can now be removed. At this point, the roots of the seed would have grown into the soil of the actual pot, thus connecting the coco bonsai to the pot. 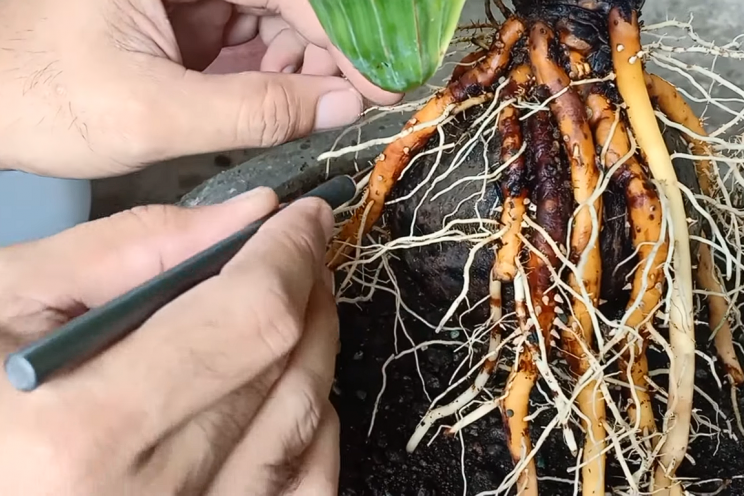 Cutting off the excess roots will improve the look of the coco bonsai.

Spray water on the seed to wash away dirt and paint it with varnish to improve its overall look.

At this point, the coco bonsai is done. It will just need to be cleaned regularly to remove the dried-out portions of its stem. The good thing is that maintaining coco bonsai becomes less regular over time because its growth slows down as it ages.

Creating coco bonsai is a rewarding process. Like growing other plants, it takes time but what one gets in return is a living artwork they can take pride in.

For more information on creating and maintaining coco bonsai, check the Youtube channel of Glenn Olis.