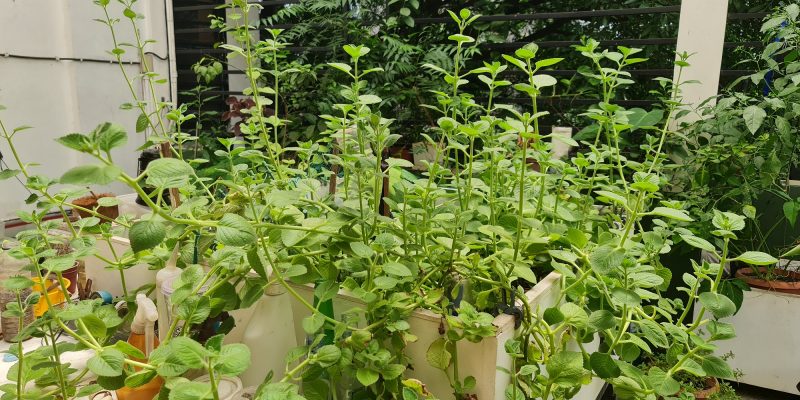 The Indian borage has taken over this square foot planter! I will clear some space for new plants soon! (Villa)

My name is Roselynn Jane Villa, a public relations practitioner whose other interests include urban gardening, manual-method coffee brewing, and recently watercolor and ink drawing.

My rooftop garden is located in Sta. Cruz, Manila City. I began container gardening in July of 2016, shortly after we moved into our current home. My bedroom is right across the open area, and when I opened my door in the mornings, I would see this empty space made of concrete floors and steel grills. I thought it was a pretty cold space and would benefit from some life form and greenery. Besides, the plan for the entire floor was to make it an area where we could entertain guests on occasion. So we built a rooftop bar and mini kitchen and I thought growing herbs and other greens would be the perfect complement, and will allow me to pick fresh herbs for cocktails and meals. The garden area is about four meters by two meters. The entire rooftop is 9m x 5m. 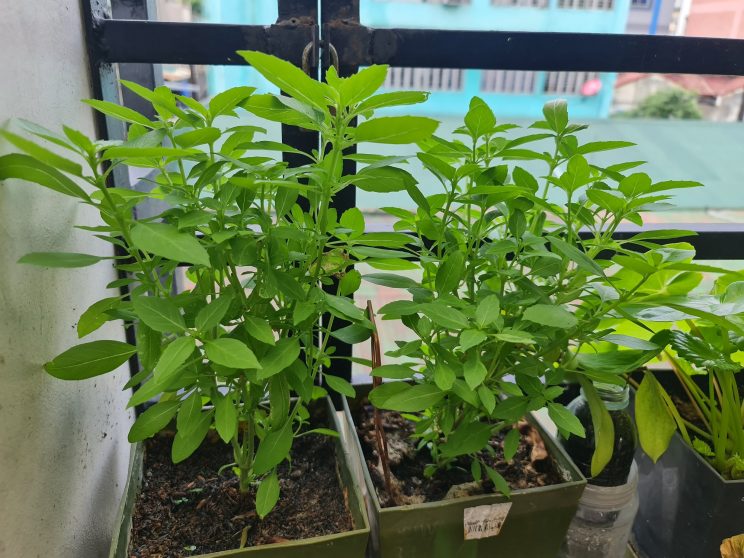 Two pots of Greek basil that I just pruned. (Villa)

My friend advised me to start with about five to six herbs, so that I am not overwhelmed, and to start with ready seedlings, so that I don’t die from impatience waiting for seeds to become full-grown plants. I first bought a pot of rosemary, who (not which) I named Rosemary Gil. The following week, I added Stevia Wonder the Stevia; Melissa the Lemon Balm; Ermintgarde the Swiss Mint; and Oreganern, the Italian Oregano. My friend would gift me a week later with Indian Borage who I named Oreganire, because we call it oregano locally.

Among my original plants, the only one to survive to this day is Oreganire. She and her offspring (from cuttings I made from the original plant) have survived long bouts of neglect from this owner, even when I would not water them for months and months.

As the months and years went by, I would add other herbs and edible plants to the garden. I was willing to experiment which ones would grow in my area. I have found preference in starting from seed even if they would take longer, because I found fulfillment in seeing them germinate and grow into an adult plant. Growing from seed using soilless growing medium that I purchased from reputable garden supplies centers… assures me that I am not bringing unwanted insects, pests, or diseases in my garden. I have also purchased some edible flowering plant seedlings. I put them in quarantine for a few weeks before placing them beside my older plants to ensure that they are disease and pest-free. 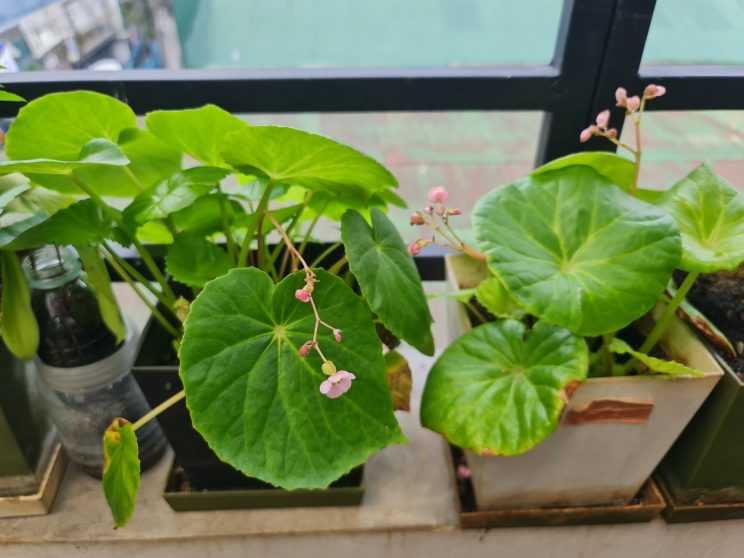 A mix of food and ornamentals

At first I intended to grow only edible plants, but nature told me that variety is key to a healthy ecosystem. By nature, what I mean is from observing what plants grow easier in my area, what plants have a higher tendency to get stressed and get sick, what plants are frequented by the butterflies, and birds, bees, and beneficial insects, and which ones are attacked by pests. I let the garden self-correct as much as possible, where I leave some plants for the pests and birds as “offering” so they would leave the other plants alone. I would intervene with organic pesticides if the infestation is really bad, but mostly, the garden would achieve an equilibrium where it would thrive happily, and serve as food for the fauna in my neighborhood too.

Today, my plants consist of a mix of edibles and ornamentals. I have mayanas, monsterras, pothos, and various cacti – either gifts or cuttings given to us that I placed on any available space the garden area could accommodate. I also have pots of papaya, citrus, and neem seedlings, which I hope would grow into bigger trees one day. I have greek basil, pansit-pansitan, stinging nettle, aloe vera, insulin plant, cebai rawit chili, and kamias, all growing in containers. I have also tried growing oyster mushrooms, placing them in a shaded area, as well as taking care of African Night Crawlers in my worm bin.

Mixing the food crops with some ornamentals allows for biological diversity to my rooftop “jungle.” 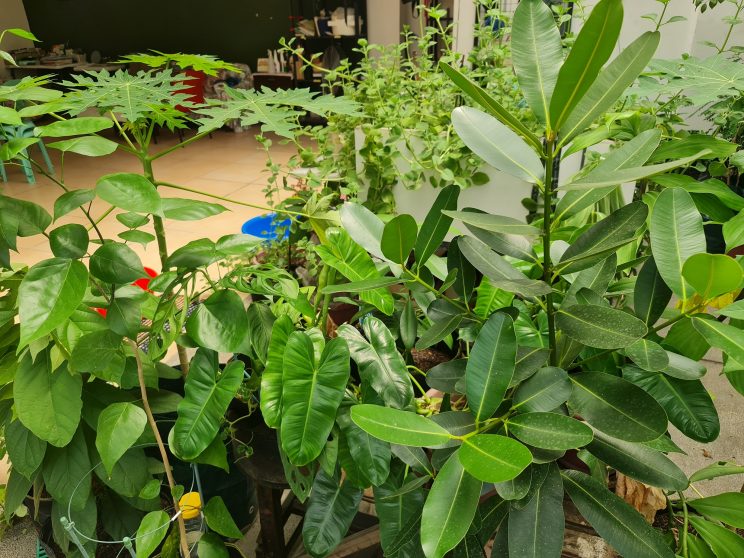 My first set of plants died so soon because they were the only ones in my area, and soon the birds and other pests came to attack. When I filled the area with plants, my garden achieved a balance, where the birds would chew on some leaves, but never too much to kill off a plant. Pests would be eaten off by beneficial insects and so their population never grows to a level where they would harm my plants.

The main challenge is the panic and anxiety from seeing your plants get sick and die. The disappointment of not having that cliche green thumb, and wanting to give up because you cannot take care of anything. It’s a good thing that I happen to have a persistent personality. I couldn’t just give up without having at least attempted to intentionally get better at gardening by studying and seeking advice.

My first solution was to read up–blogs, books, and videos. I learned a lot from online resources but got frustrated that all the advice was made for temperate countries. And there were scarce resources for growing a garden in the city in a tropical country like ours. The second step was to join groups of fellow urban gardeners. I’m glad I found Manila Grows Food–it’s a Facebook group with great admins who foster inclusiveness and an atmosphere of learning. I learned a lot from the posts and sharing of fellow urban gardeners.

The final, and I suppose most important, part to overcome in terms of gardening challenges is to have patience and endurance. I need to understand that having a garden is not about personal control over plants who are living creatures, but to be the kind of gardener who can create an ecosystem where they can thrive. The circle of life means some will die and some will live, and the more I plant and grow, the higher my chances of having them thrive. I have also learned to grow plants that fit my personality: I grow hot and cold in my enthusiasm, and many of the plants I have chosen will thrive with neglect, which is perfect for when I am away on travel or if I don’t feel like fussing over them every day. 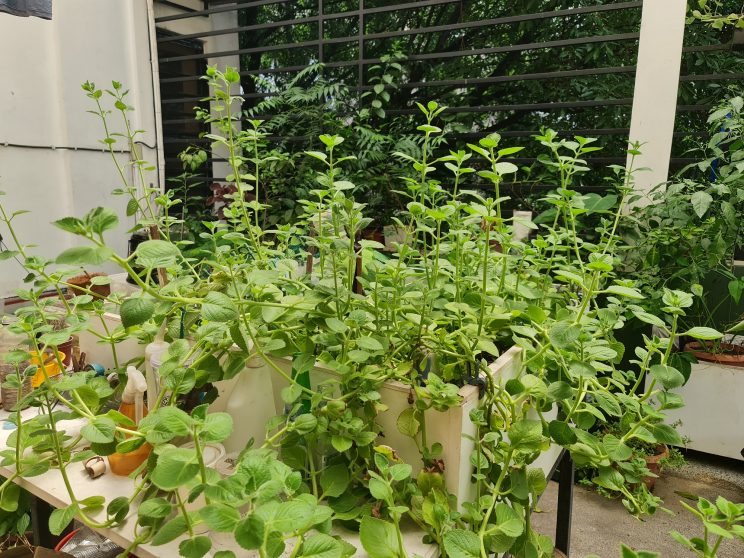 The Indian borage has taken over this square foot planter! I will clear some space for new plants soon!
(Villa)

Sometime during the extended Enhanced Community Quarantine (ECQ), when our mobility had been limited to essential errands for what felt like far too long, my enthusiasm for taking care of living things also waned. I just didn’t want to water or prune the plants anymore. Pretty soon, I had stopped watering the plants at all and they died off one by one. The only plants left were the really hardy ones – the trees (kamias, neem, citrus), and the ones with medicinal value such as the Indian borage and insulin.

There was no particular reason for restarting. I think one day I decided to take a cutting of an Indian borage and root it in water. When I saw healthy roots, that kind of jump started my desire to plant again. And the garden has a way of pushing you once you start–for instance, with the watering of the soil, I started seeing volunteer plants again–the stinging nettles started growing as weeds. In my area, when I see pots with volunteer stinging nettles, it tells me that that pot is healthy and pest-free. Also, my pansit-pansitan plant apparently had a lot of dormant seeds, it started growing again and seeing new plants further encouraged me to continue.

This time around, I have 50 per cent edible plants and 50 per cent ornamentals. The ornamental plants were cuttings given to me by our help and they added a splash of color to the greens of the garden. I have not yet planted new herbs though as I am not yet ready. I let the Indian borage occupy a huge space, so that my garden will always have plants that refuse to die. When I am ready to plant other herbs, I can just easily clear them.

I use the borage for pesto and drinks, and sometimes anti-mosquito balm. I use the Greek basil for pasta and sandwiches. The insulin leaves are used as a calamansi substitute for pancit canton. Because of the abundance of the borage, I actually use the leaves to pick up dirt and debris instead of using paper towels–this is a money and environment-saving discovery for me. If the debris is organic/biodegradable I would just throw the leaves back into the pot so they decompose and serve as soil conditioner.

I would like to clear up some space to add a proper hydroponics area with LED lights to grow some tomatoes and leafy greens. My plants are tall and lanky because of the lack of ample sunlight. This is due to my polycarbonate roofing which I could probably change into a different material to allow for better sunlight. This way I could fully revive the garden and grow more herbs and salad greens.

I love that I could use the prunings and cuttings in preparing cocktails, or garnishing my breakfast, or having a bunch of basil to add to pasta at any given time. The access to fresh herbs is among the best perks of having an edible garden.

For a time, I also grew some okra plants. I discovered that okra can be eaten raw, and they are crunchy and sweet, unlike the ones we buy from the markets. Nothing beats freshly harvested greens and vegetables, in my opinion!