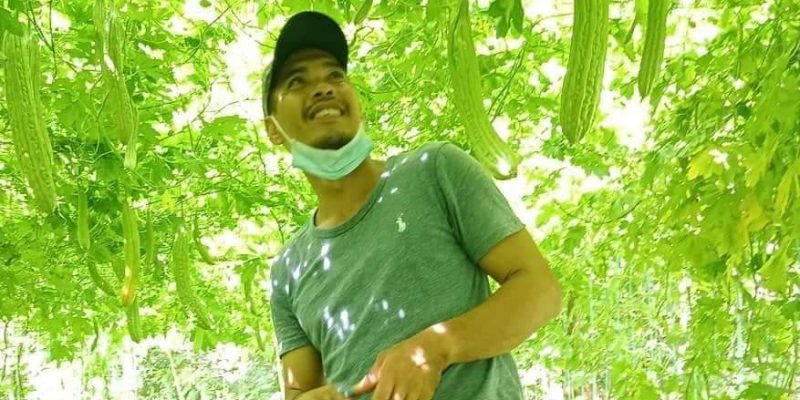 Fernando Ramirez, 34, is believed to be the only ampalaya grower on Santiago Island to date.

Fernando Cacho Ramirez, 34, has been growing fruits and vegetables for the past ten years, but it was only recently that he began raising ampalaya as well.

He worked on a friend’s farm early in his farming career as a farmhand. Today, he oversees their family’s agricultural property on Santiago Island, an island that remains detached from the main town of Bolinao. 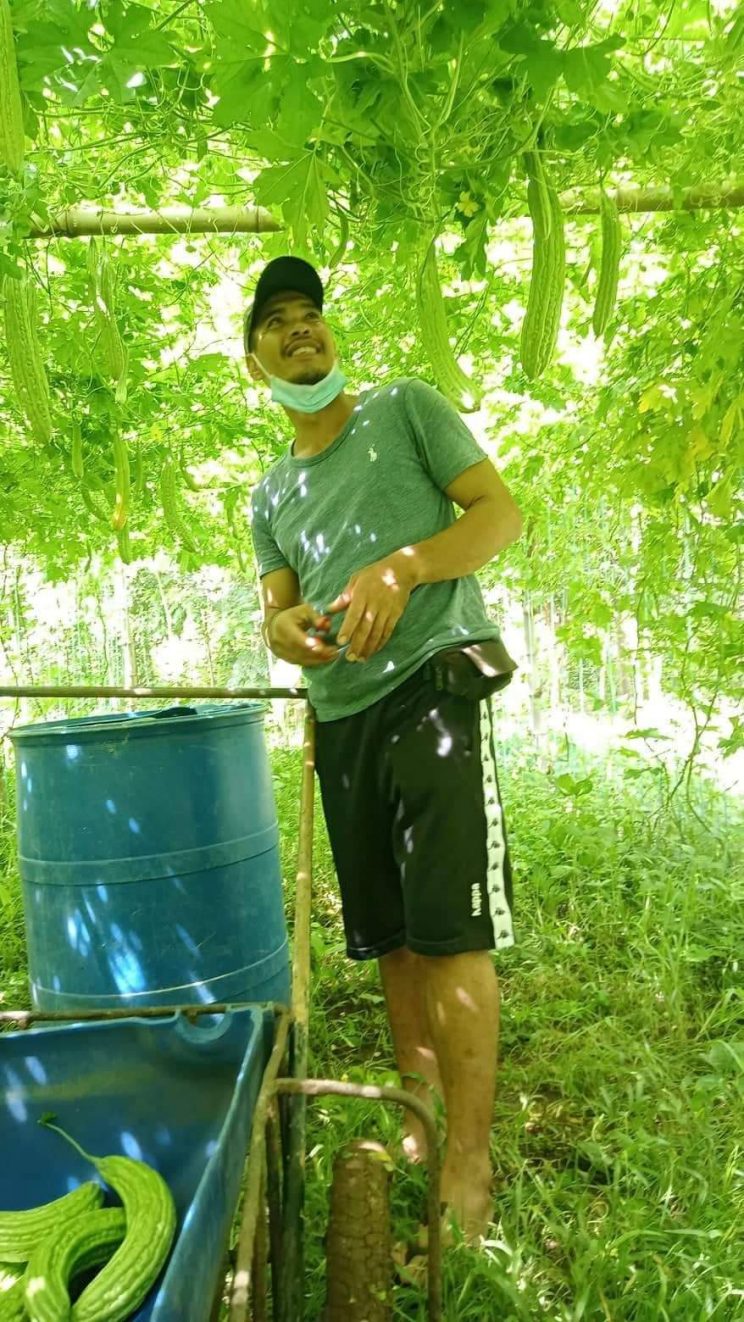 Fernando Ramirez, 34, is believed to be the only ampalaya grower on Santiago Island to date.

When it comes to accessibility of produce on the island, Ramirez says, “There are grocery stores here but limited to canned and dry goods. There are only a few sellers of fruits and vegetables, [most of whom sell their own products]. The main livelihood here is fishing. There are very few farmers, while [other islanders] are working in Metro Manila and some are OFWs.”

To go to and from the mainland, locals usually spend a minimum of P200 for the tricycle and boat fare. “Mostly, island people go there to buy other needs, especially on Tuesdays and Saturdays, our market days,” he added.

Ramirez claims that he is the only ampalaya grower on Santiago Island so far. He began planting ampalaya last April 2022. To date, he is already harvesting two to three times a week, with a minimum of 50 kilos per harvest. 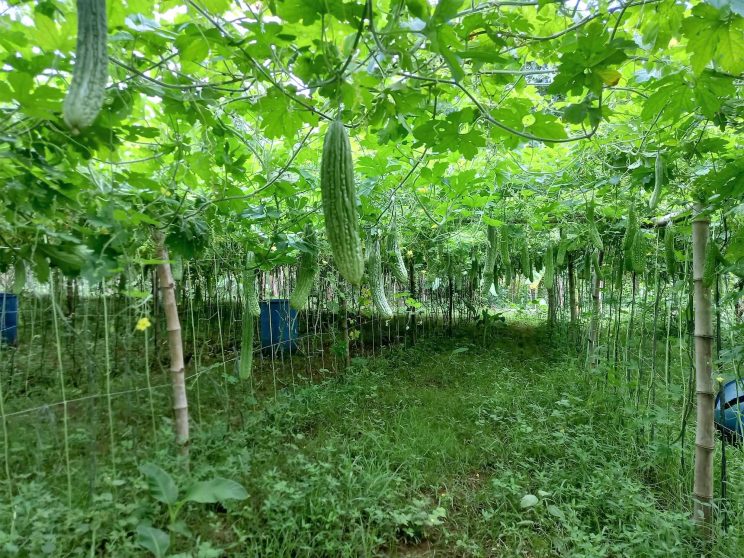 The Ramirez family consumes farm produce, but Fernando sells some of it and offers discounts to retailers and sellers. Some are bartered for fish from his fisher friends.

“I’m the only ampalaya grower on the island because farmers here primarily grow cassava, onions, sitaw, and eggplants.” On the mainland, however, there are other ampalaya farmers that supply bittermelon to markets in Bolinao. For this reason, Ramirez exclusively sells his ampalaya produce within Santiago Island.

Ramirez was also told by his retailers and sellers, who are fish and vegetable vendors there, that they haven’t encountered other ampalaya producers on the island aside from him.

Even though he is a new ampalaya farmer, Ramirez’s 10-year farming experience equipped him to grow the vegetable successfully.

The first thing he did was apply goat manure to fertilize and nourish the soil one month before planting. Then, he installed a trellis around the growing space a week before sowing his ampalaya seeds to protect the plant.

“While the crops are growing, I used a small amount of complete fertilizer (triple 16) directly applied by broadcasting it near the plant.”

Ramirez has placed sticky insect traps throughout the farm to keep fruit flies away from plants. He also uses pesticides and insecticides, but when he does, he makes sure to flush them out for three days before harvesting crops. 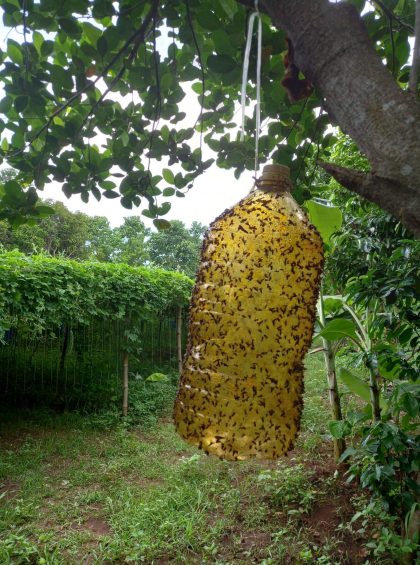 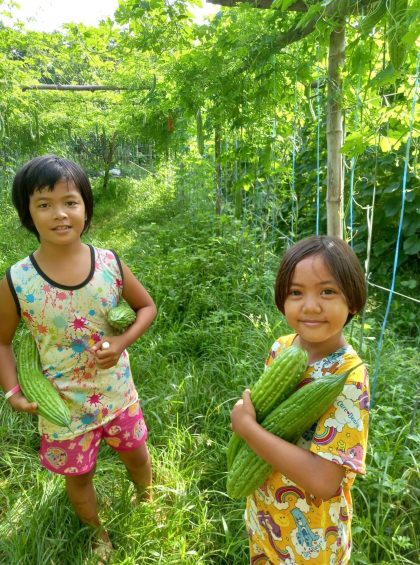 Fernando’s nieces with their ampalaya harvest.

He also inspects the plants daily. He immediately removes and discards the fruits or plants if there are any signs of insect bites or damage.

Summer is the challenging part for him. Since the deep well with a water pump is 50 meters away from the farm, he uses a long garden hose to fill water drums and then manually waters every crop.

A family that farms, farms everywhere they go

He farms on more or less two hectares of property that he and his siblings inherited from their late father. It is home to a variety of crops, including cassava, jackfruit, mango, and banana. This inherited land was subdivided among the Ramirez siblings, but since most of them do not stay there, Fernando manages the land for the most part.

There, he raises goats and breeds chickens for cockfighting. 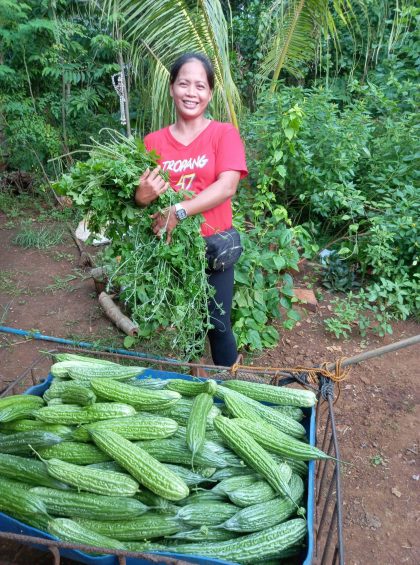 A photo of one of Fernando’s sisters who is also a farm seller. 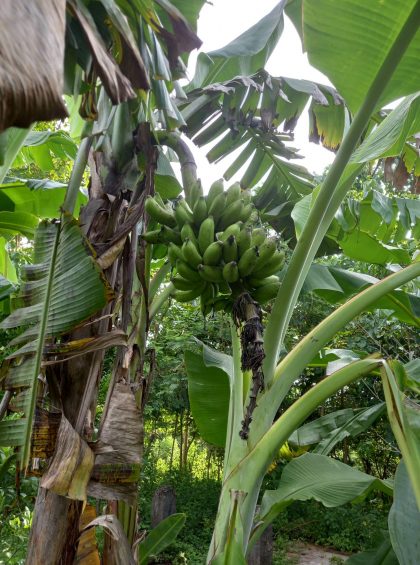 Before building an ampalaya farm, he only grew sitaw, eggplants, onions, cassava, and sweetpotato in his previous work.

The ampalaya farm is located 50 meters away from the mainland. It is a separate land owned by his brother, who is a soldier and has an agricultural background.

“My brother offered me to use his extra land measuring more or less 1,700 square meters, and he also helped me [with] buying seeds and constructing the farm trellis.”

Aside from ampalaya, other crops that he grows include banana, calamansi, cucumber, and string beans.

In more than two months of harvesting ampalaya, he already earned a net income of P35,000. 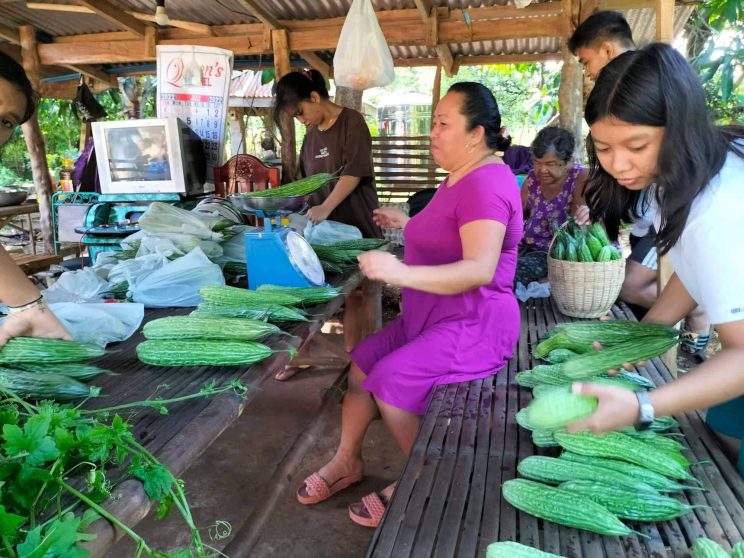 He is blessed to have siblings who share the same passion for agriculture, even though they do not live under the same roof anymore. He is the brother of Cristina Ramirez Padua, an urban gardener who farms lettuce in the city and was also previously featured by Agriculture Online.

Being raised in an agricultural household allowed him to have the heart of a farmer. Through this feature, he silently hopes that the authorities would take notice and provide assistance to all of the island’s smallholder farmers like him. 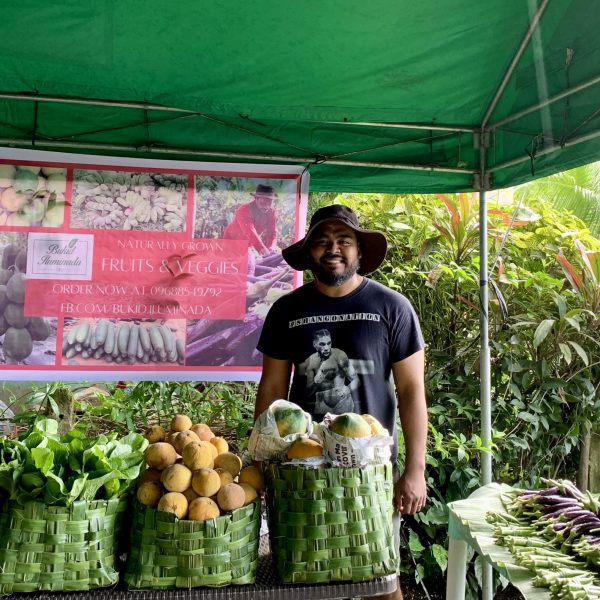