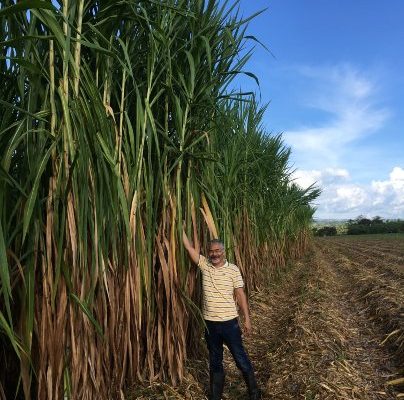 This variety of napier grass promises to be an important element of renewable energy in the country. (Secura)

Now that humanity has realized the long-term dangers of relying on fossil fuels, there is a huge interest in alternative energy sources, which include renewable energy. If run properly, renewable energy companies stand to gain a lot of money. A Filipino company is throwing its hat into the ring, using an unlikely agricultural product as its main source of fuel: napier grass.

This variety of napier grass promises to be an important element of renewable energy in the country. (Secura)

Secura International Corporation President and CEO Danilo Manayaga, Ch.E. said that they have been using napier grass since 2016, when his company was asked to put up a 300 hectare plantation for the  Lamsan Power Corporation in Maguindanao. Tagkawayan Power Corporation, a 10 megawatt power plant in Quezon that they are currently setting up, uses napier grass as its feedstock  as well. “We are mostly focused on renewable energies, especially the use of biomass,” Manayaga said. “ Another project on the horizon is the production of bio coal from Napier grass biomass. We have two sites in mind, one in expanding the Maguindanao plantation area and also in Morong, Bataan where we have 10,000 hectares for biocoal production.”

How did Manayaga and his partner, Dr. Frank Shotkoski, Secura’s operations manager and Tagkawayan’s president, identified several factors that have helped them determine the variety of napier grass that is optimal for their purposes.

Fast growing. “The holy grail of biomass really is how fast it will grow and how much per hectare it can provide in terms of biomass weight,” Manayaga said. “We selected around 132 different varieties and subjected them to competition [such as] based on fertilizer use, based on water use and the height or the weight of biomass produced per square meter.”

Carbon sequestration. “The thing about that particular grass is that it grows so fast, it has a very high cellulose content, it does require a lot less water… These plants will grow up to six to seven meters high. The roots are going down and are also sequestering a lot of carbon and holding it down there,” Shotkoski explained. “This particular napier grass, which is a hybrid between a West African sorghum and a native napier grass, has a…very high yield, at least 200 tons per hectare per harvest. You can harvest this thing twice a year…. It has fleshiness to its green leaves, which makes it palatable for livestock and… are [also] really good to be used in a digester to make biogas, so it’s going to be used to run the electricity to run the power plant ….”

“We use the topography of the land…. It really becomes a much better native environment compared to just native grass just growing from the deforested areas. It has a lot of good ergonomic attributes,” Shotkoski added.

Continuous growth. The grass is cut at the top, leaving its roots intact, so it will keep growing without the need for new plating materials for a long while. “We’ve had some now that’s been planted almost 10 years and it still just comes back, so it’s one of these things where you just don’t have to disturb the soil very often,” Manayaga said.

Opportunity for idle land owners. To date, the company has 300 hectares planted in Mindanao and around five hectares in Bulacan, all of them distributed to about 90 cooperatives in both provinces. The land is leased  for 15 years. “That’s the income to the landowners, which they can use for many others. That’s how this relates to the local agriculture utilization of this unused land,” Manayaga said.

By law, farmland cannot be used to grow biofuel, so there is no conflict with food security. “According to the Renewable Energy Law, idle land that is allowed to be used as biomass plantations should have not been planted for 15 years of any food crop, [except for] sugarcane and coconut land areas,” he added.

From grass to gas

There are several ways biomass becomes energy. One way is through combustion, which is what the Manguindanao plant does. The biomass is burned in a furnace, which heats up tubes that turn water into the steam which drives a turbine to produce electricity. Another method is by making syngas, which is produced by heating biomass without oxygen so that it is converted to gas. Syngas can also be purified into hydrogen, which has several uses, including being combined with ammonia to produce fertilizer.

Another method is through torrefaction, where the biomass is roasted. 30% is turned into heat, and the rest is turned into a kind of coal. “It has higher energy compared to local coal at 24 megajoules or 5700 kilocalories, and it can be used in pellet form,” Manayaga said, adding that the pellets are waterproof and are a good candidate to replace coal. This is the plant that Secura hopes to build in the future.

The future is now

There are many reasons renewable energy is of interest worldwide, and even more reasons the Philippines should be interested in producing this technology.

First, if produced locally, it can be a source of cheap power. “For the Filipino consumers, we’ll be producing cheaper power and at a stable price because we’re not shipping the coal from over ocean,” Manayaga said. “The only escalation there is the cost of harvesting, which uses diesel at the moment.”

Shotkoski added that their two current plants are carbon neutral. “You’re going to have the (plant) very near (the fields), so the CO2 that’s going to go into the air is going to be reabsorbed into the plants because the plants need the CO2 in order to grow, and (the plants are) going to give off oxygen. That’s why it’s neutral. If our burning did not give off coal, then it would be carbon negative. The main thing is not to produce or add any more to the environment if we can.”

Third, it can be important to national security. “For national security, it’s actually a very important component because right now, this country’s energy is dependent on the ability to get coal, mostly from Indonesia,” Shotkoski explained. And if you remember, just a few months ago, Indonesia was going to shut down all exports to China and the Philippines and other parts of Southeast Asia because they were running short themselves. So the Philippines is quite vulnerable because we really don’t have a source of coal. And the coal that we get from Indonesia is not high quality coal.”

And fourth, renewable energy can be converted into many things, including electricity (which is what the Maguindanao plant is doing), hydrogen, biofuel, and gasoline.

Manayaga and Shotkoski are optimistic about the future of renewable energy in the Philippines.

“Now is the future. We’re ready to expand. The planting materials are available, the market is very conducive, the price of coal is going up, and we are able to help climate change, so we’re now ready,” Manayaga said.

“Something that’s been making the news a lot lately… the importance of investing in agriculture… What we’re doing is offering agriculture a truly new commodity and a new opportunity, for not just the farmers, but for everybody that’s involved in agriculture, because we can put tens of thousands of hectares of land into production,” Shotkoski added. “This is a huge opportunity for agriculture in general as another commodity.”

Planting napier grass for biomass is an interesting way to utilize idle land while providing income through rent to the landowners.