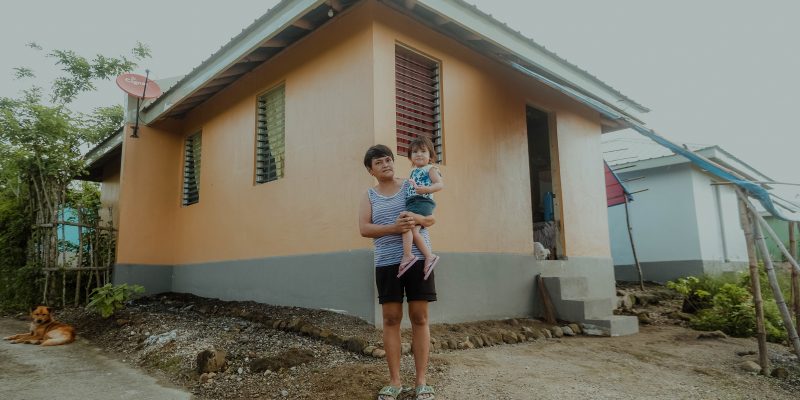 A father and daughter pose outside their house in Sorsogon. (BASE Bahay Foundation)

Bamboo is known for its sturdiness and its many uses, which can range from food to furniture. At Base Bahay Foundation (BBF), it is the foundation for a secure and permanent home for many families.

BBF, an non-profit, non-government organization (NGO), is a project of the Hilti Foundation, the Social Corporate Responsibility (CSR) arm of the Hilti Group of Companies.

“There is a huge housing deficit now running to six million. Hilti Foundation started looking at bamboo as a structural grade alternative material for construction,” he says. “Our vision and mission is to provide alternative building technologies to our network of partners… so that we can form a coalition and build communities and provide them housing that is affordable.”

Their partners include local government units as well as non-government, corporate, and CSR organizations. Together, they construct affordable, permanent, and disaster-resilient housing for marginalized communities using bamboo as a foundation.

The project began in 2011, when the Hilti Foundation gave Cornnina Saltzer, a German student taking her PhD, a grant to study green materials, one of them being bamboo. The resulting technology was successful, fitting modern building requirements such as being able to withstand typhoons, resist a wind speed of 240 kmph, and an earthquake magnitude of 6.5 and above. “This is a material that could help not only the people in the community where bamboo is abundant, [but] it becomes a circular economy because the material that they will be using to build their community will be coming from the locality. The training and manpower will also be coming from the community and as a result of that, they will also have their own house. That has been the setup from 2011… to the present,” Jorillo said.

Everything is tested in Hilti Foundation’s lab in Makati, currently the only one in the Philippines with the capacity to “test full scale wall systems under dynamic loading.” 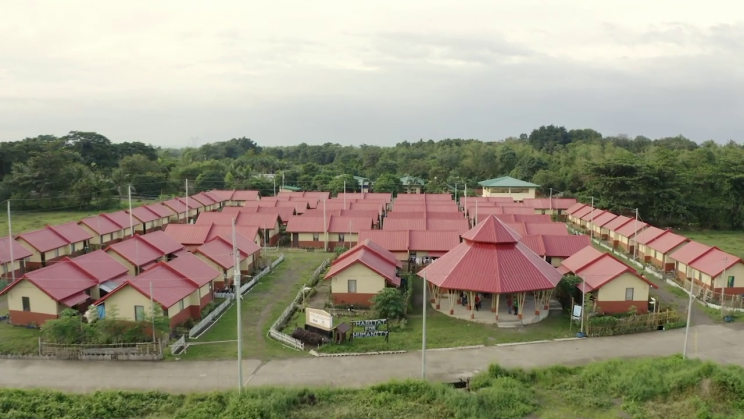 A new spin on an old technique

The technology is not new. It’s actually a modification of wattle and daub, one of the oldest weather proofing techniques in the world. Known in colonial Philippine architecture as “tabique Pampango,” it is a wall construction method that involves vertically placed wooden stakes woven horizontally with branches (the wattle) that is covered (or daubed) with clay or mud.

“Hilti Foundation… re-engineered [the] tabique Pampango… into what we call cement bamboo frame technology,” Jorillo explained. “It’s a timber frame, where the timber carries all the load of the structure. It carries the wind load, the earthquake load, the whole deadweight of the house.”

The frame is covered with a wire mesh, whose function is to hold cement mortar plaster. “It’s more of an architectural covering or cladding than a structural component, but of course it adds to the strength of the house,” he added. “It’s called ‘bamboo frame’ because it’s like a timber frame, and ‘cement’ because it has a cement cladding.” 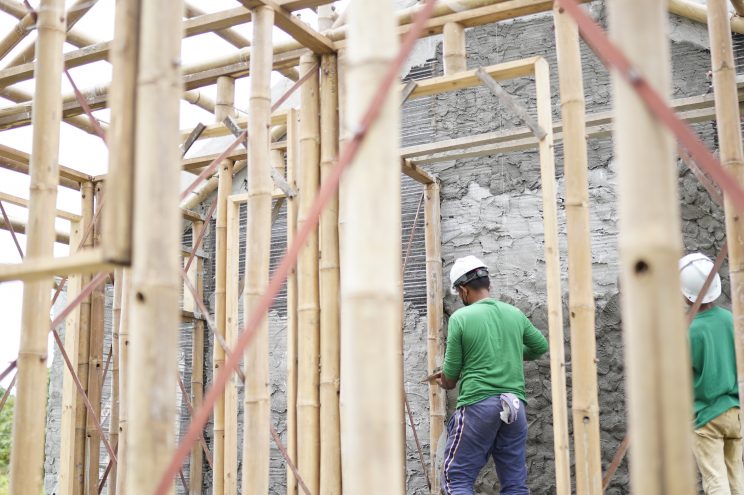 Affordable, aspirational, and up to code

The bamboo is harvested from or near the communities the houses will be built in, but it must be treated before use to ensure that it is up to code. “it is a requirement by the National Housing Authority that the technology that you’re going to use must be certified and accredited,” Jorillo said.

The NHA’s certifying body is called Accreditation for Innovative Technologies for Housing (AITECH), and criteria for mass housing includes using construction materials that last no less than 25-30 years. This is why the bamboo must be treated before it is used.

Jurillo touches on an aspect that is only recently being highlighted as important in social enterprises: the importance of dignity for the recipients. In this case, it’s the aspiration to own a sturdy, modern, and presentable house made with cement and hollow blocks. “We should be able to provide them with a house that’s similar to their aspirations,” he said. “…we have the Association of Structural Engineers of the Philippines calculate it and compare it [with your conventional concrete hollow block]. You’ll see that the cost savings is 30-40% less.”

The structures measure 25 sqm, with one bedroom which can be split into two, one toilet, a septic tank, and a kitchen. Using cement bamboo frame technology also lessens the carbon footprint of the construction. Measured against the 12 tonnes of CO2 emitted when building a house  of the above specifications using conventional building materials, urillo says that, “whereas if you build with cement bamboo frame technology, you are only producing 3.5 tonnes of carbon dioxide equivalent CO2. So there is a reduction of 75%.”

He explains how this is possible. “Number one, you switched concrete hollow blocks with a thin wall structure like cement bamboo frame. You did not use imported timber. You did not use reinforcing bars. Instead, you used bamboo poles to do that. That’s why there’s a carbon emission reduction of 75%.

“We are so proud because it’s not only affordable, you’re helping the environment… and the community as well. It has a lot of socio-economic and environmental impact.” 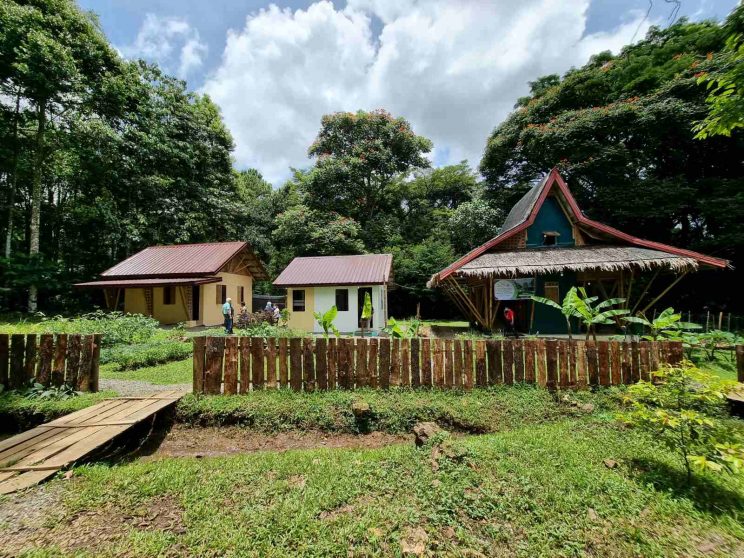 BASE Bahay has built 1000 to date. Unfortunately, despite such successes, there is still a big hurdle to conquer, and that is mindset.

“In spite of all the houses that we have built, the bamboo still has a stigma of being a poor man’s timber and a material that doesn’t last long. This is understandable because people in the rural areas would just harvest bamboo and just use it in their houses. And it’s not properly treated so in a couple of years, the bamboo deteriorates.…  So we still have to hurdle that challenge, especially if you would like to use it for socialized housing,” Jorillo says.

Despite this hurdle, the technology has proved successful enough that there is interest in using it in other construction projects, including classrooms, a food processing plant, a weaving center, and middle class mid-range housing. “We’re not limited to socialized housing but we can expand more. It’s just a matter of who would be willing to partner with us and use these green and sustainable materials for their structures,” Jorillo says. 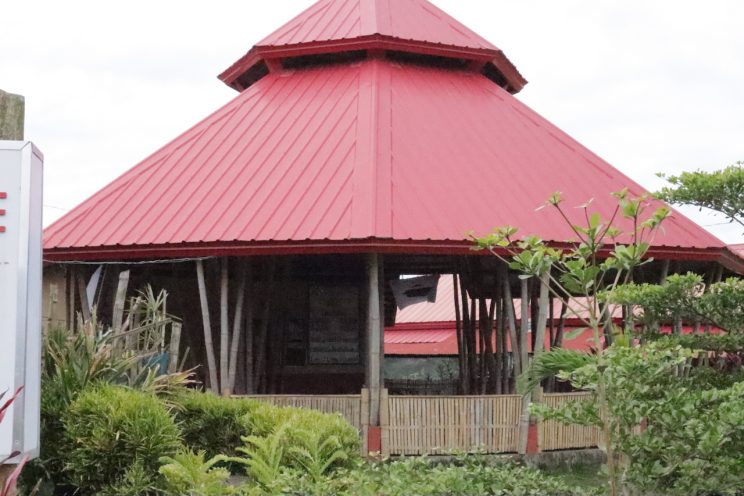 Community Center inside the Katuwang Community in Silay Negros Occidental. (BASE Bahay Foundation)

Because it’s a grass that’s believed to be easy to grow, bamboo tends to be overlooked. This is slowly changing, as there are several local organizations, some of them with international linkages, that are pushing for the popularization of bamboo as a crop due to its many potential uses in different industries. “There is now an increasing awareness among farmers and there is now an extra push from the Department of Trade and Industry and DENR to start planting bamboo. And it’s now a part of the initiative of the Philippine Bamboo Industrial Development Council or PBIDC and [the] DTI,” Jorillo says, adding that the DTI has classified bamboo as a high value crop.

Aside from being excellent raw material for many industries, planting bamboo can also be good for environmental conservation and soil rehabilitation. “If we would like to encourage farmers to plant bamboo, we would encourage them to plant near the water areas: rivers, creeks, because it is a good material to fight soil erosion and it is a very good material to protect water banks,” he adds. “…if you have a cogon grass area that you would like to turn into a farm, the best… plant to do that is by planting bamboo.” 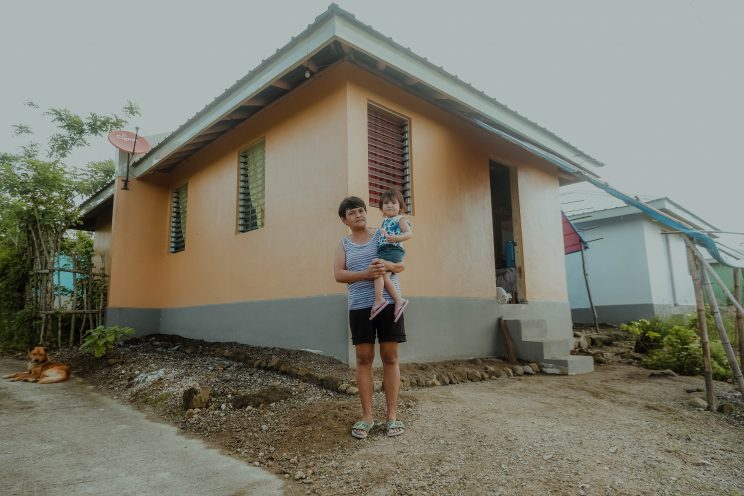 A father and daughter pose outside their house in Sorsogon. (BASE Bahay Foundation)

Some residents have been living in their homes for as long as eight years, and have weathered numerous storms and typhoons in them.

Now that they have several communities that can attest to the proof of concept, BBF is looking to scale up. “We would like more communities to be built using this technology,” Jorillo says, “…not limited to socialized housing, but open it to other structure like a weaving center, …a school building, …a community center, and from there move to a different level, maybe use it for middle class housing, well developed, architecturally pleasing structures using the same technology.”

To this end, BBF is looking for partners to share the technology with so that it can be used and further disseminated. They currently offer NC2 certificates for workers as well as CPD credit for PRC licenses for engineers and architects. “…this is an open technology and we are sharing it to everyone,” he says.

Jorillo says the best part of his job is seeing folks acquire sturdy homes that they can call their own, and that they are confident will withstand the elements. “It gives you the satisfaction that you’re not only building communities but really providing them with secure housing. Sounds corny but actually, looking at their faces, it’s your psychic income that you have really helped and provided our kababayan (countrymen) with housing,” Jorillo says.

Not only does it mean shelter during the annual storms, it also means a secure base from which its residents can flourish. He adds, “If they have a house, they are more secure. They have an address. They can look for work. And their children have better chances of having a better future [if] they have a home.”