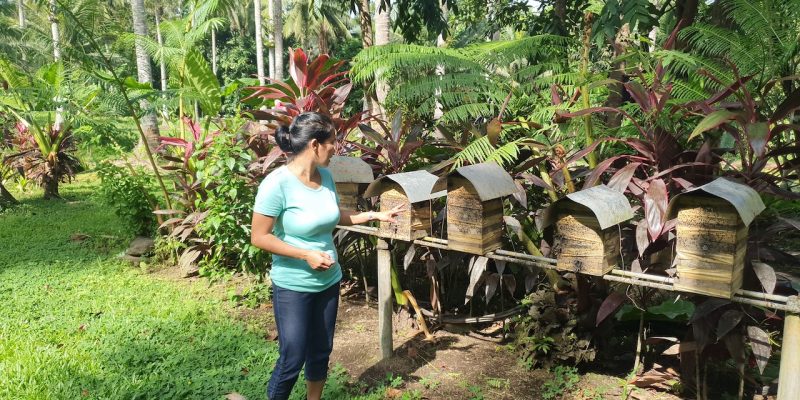 This single parent, entrepreneur, and diversified farmer specializing in stingless bees caught the eye of the organizers of the National Search for Outstanding Rural Women 2022 after winning the regional search in October.

Leizel Grajo, 39, tends to pineapples, red Panama passion fruits, coconuts, a fish pen, and hundreds of colonies of stingless bees in her family’s farm in Casiguran, a coastal town in Sorsogon, about 600 kilometers south of Manila. Grajo’s father, an agriculturist, acquired the land years decades ago. Known as The Colony, she also raises chickens and pigs, and grows flowers to sell to guests. 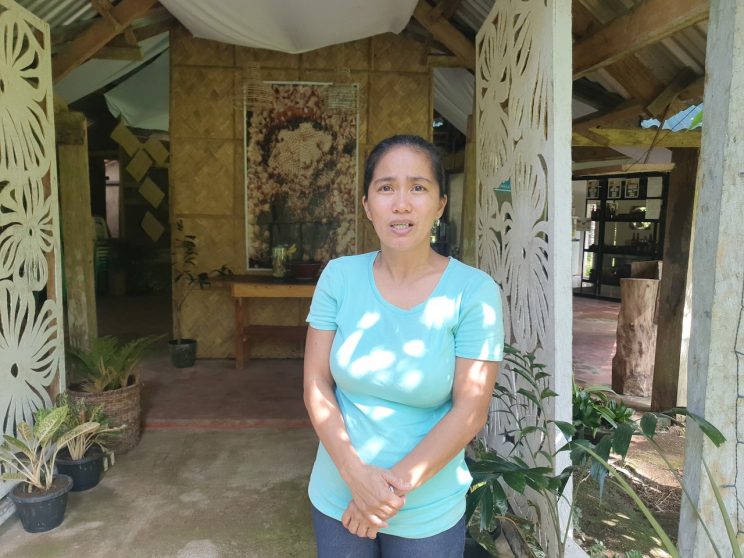 Leizel Grajo at The Colony Cafe in their main farm in Casiguran, Sorsogon. (Oliver Samson)

About 70 percent of the income of The Colony’s bee farming is generated by bee colonies. They market live bees for P3,500 per colony. The boxes are put together using water-resistant kalantas cedar wood.

“We actually produce more colonies than honey,” Grajo revealed. “Our farm can offer a maximum of 100 colonies.”

Grajo ships bee colonies to Mindoro, Davao, Samar, Pangasinan, Sultan Kudarat, and other parts of the country. She started producing colonies for the market in 2016 after noticing the demand for bees was growing.

Grajo currently tends to 620 colonies. Of the total, 350 are kept in their three-hectare main farm in barangay Tigbao. The other colonies are kept in the Casiguran barangays of Tiris and Mabini, and in the town’s poblacion of Timbayog.

Food shortage can lead to the death of some colonies, especially the weaker ones, Grajo added.

“We regularly observe for any weak colony,” she said. “We look for a new place where food sources can adequately support and sustain them. Then, we pull them out and relocate them to that place.”

The relocation site must have a bounty of fruit-bearing plants and trees, Grajo noted.

“When the place is rich in resin, the colony is strong and can quickly seal their hive,” she said. 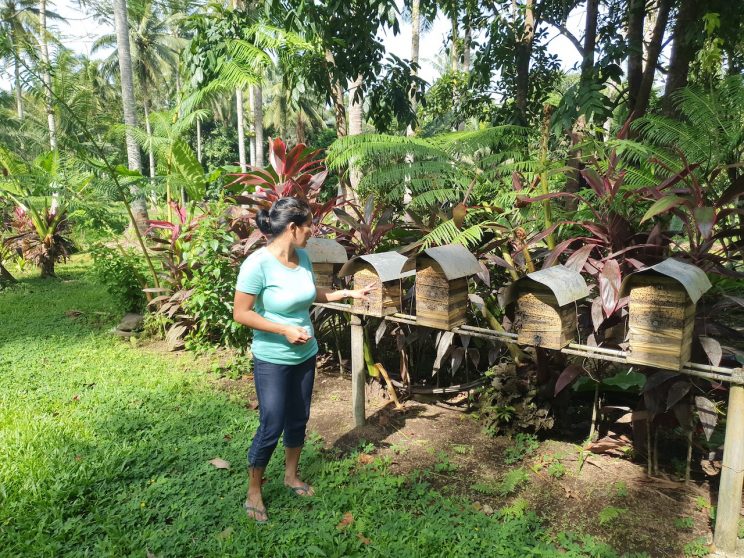 One or two colonies are ideal for a beginner, especially when the beekeeper has not enough time to look after them, Grajo shared.

Grajo harvests from colonies quarterly, but she avoids accessing all the hives, especially if a colony demonstrates that they still need more time to develop. Bad weather can disrupt activities in a colony and heavy rains can damage the bees’ food sources.

“We don’t open a colony if it looks frail,” she said.

As for the honey, Grajo harvests an average of ten gallons every quarter.

The Colony bottles and labels the honey it produces for the market.

Thirty percent of their bee-keeping income is generated by honey and bee pollen sales.

The Colony’s bee pollen has a market in the growing number of local gamefowl raisers, Grajo said. The gamefowl enthusiasts use it as a food supplement for their chickens. They find her bee pollen a lot cheaper than its mainstream counterparts at poultry supply outlets.

“At times, a colony has more bee pollen than honey,” she said. “There are also times a colony produces about as much honey as bee pollen. It really depends on the bees.”

The Colony dehydrates the bee pollen to lengthen its shelf life. They sell bee pollen at P2,300 per kilo.

The Colony bottles and labels bee pollen separately for both gamefowl and human.

“One of the threats to bee farming are the typhoons,” she said. “A number of typhoons traverse through our province annually. But if you have the right technology, commitment, and common sense, you may lose only a few bees to the typhoon.”

Bees under the Apis Mellifera, like the ligwan (Apis cerana), Grajo explained, seem to be territorial and may move from one place to another away from people, unlike the stingless bees under the Melipona that seem to be comfortable in the company of humans.

“The stingless bees are low-maintenance bees, and can be easily kept,” she said. “You just have to elevate their hives away from the reach of frogs, chickens, and other animals that feed on them. You will just need to regularly check the hives for spider webs that could trap the bees.”

It’s Grajo’s older brother, Leo, who introduced stingless bees in the farm in 2010. Leo got interested in stingless beekeeping after he saw it in Brazil. So, he bought feral colonies from locals, who collected them from the wilds.

But Leo had no proper technology in beekeeping, Grajo said. And besides, he couldn’t look after them since he was working abroad.

So, she started beekeeping in 2011. Then, she trained in UP Los Baños to develop her own bee farming technology in 2016.

“Bicol region is the stingless bee capital of the Philippines,” she said. “We have the tetragonula birio in the region. It’s a species of stingless bee, which is the strongest producer of honey.” 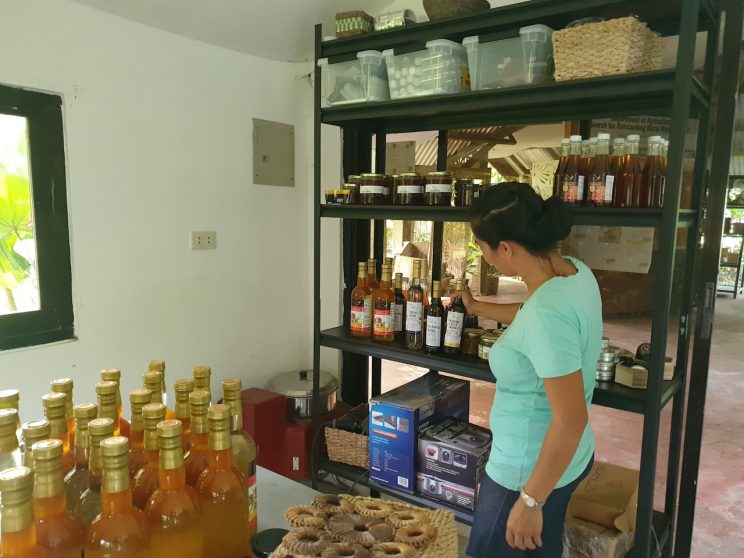 Leizel Grajo holds a bottle of passion fruit wine in the product storage at The Colony. (Oliver Samson)

Grajo does not only grow red Panama passion fruits, but she also processes them into a bottled drink. The juice drink, known as The Colony Passion Fruit Cordial, today quenches a growing market.

“We ship it to Manila,” she said. “One of the customers uses it to detox. Some of our buyers resell it.”

She also processes red Panama passion fruits into wine and bottles them for market.

Handicrafts, like women’s bags, are also displayed and sold at The Colony Café in their main farm.

The handicrafts are made by women in the community. She resells them to help them market their products.

Grajo also processes bananas into chips and markets them in packs and slaughters the pigs raised on the farm and sells them as dressed meat.

The Colony also offers catering services. Its Colony Café serves food and drinks and generates income as a venue for social events. The Colony itself has been an ecotourism destination in the past years. Their flowers are sold to guests. 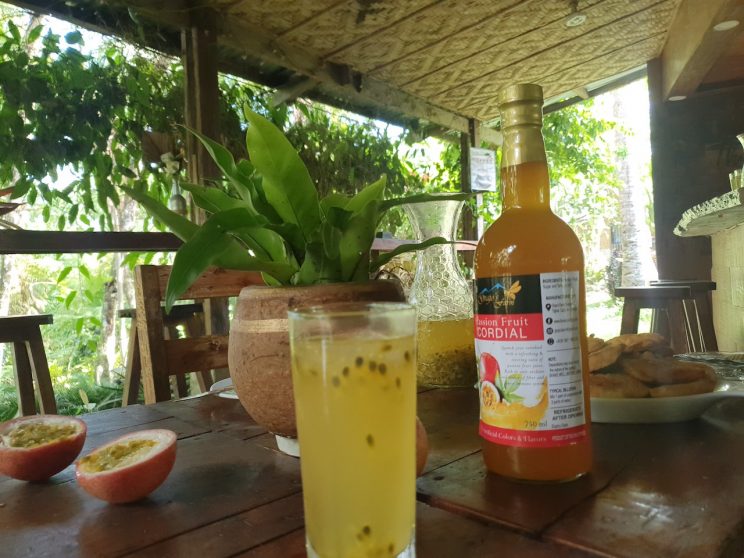 A bottle of Passion Fruit Cordial on a table at The Colony Cafe in Casiguran, Sorsogon. (Oliver Samson)

Grajo offers training on beekeeping to bee farmer wannabes. She opened The Colony years ago to everyone interested in learning proper beekeeping.

“We share with other people the technology that we developed and use here,” she said. “We share the practices that make our beekeeping sustainable.”

Grajo advises beekeeper aspirants who cannot give much time to their bees to just acquire one or two colonies.

“The bees require a lot of quality time if you expect good results,” she said.

The right and proven technology may not work for others for one reason or another, Grajo explained, but it will be made to work if the beekeeper knows how to exploit it adaptively. Common sense is also a key to sustainable bee farming. One beekeeper who used a proven technology failed simply because the food source for the bees in the area was not adequate to nourish them.

Stingless bees are good for coconut farming, she pointed out. The bees are good coconut pollinators. Ten colonies, stationed separately and strategically in an hectare of coconut trees, can boost coconut production.

The bee farmer never stops, Grajo said. The best practices of today can be obsolete in the near future. The technology in beekeeping must be ever-updating to keep it sustainable, she added. Beekeeping is a never-ending learning experience.