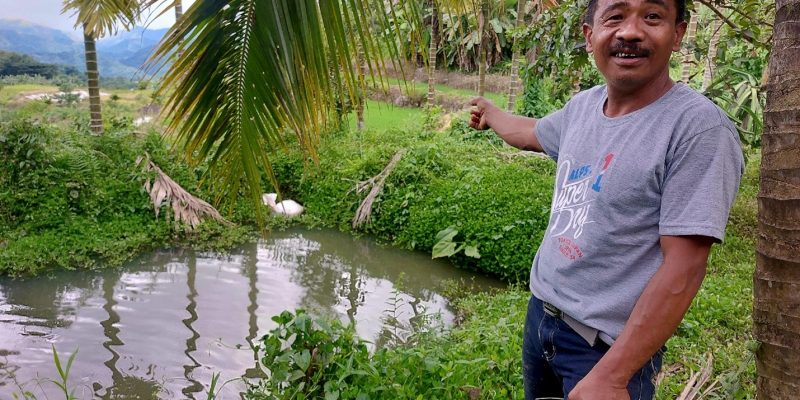 Timmangao passionately shares his knowledge to budding farmers, stressing the unlimited possibilities one can achieve in the sector. (Daniel Jason Maches)

Traversing the long and winding roads at the backdrop of panoramic mountain views and lush forests, one reaches a farm like no other. Like a self-contained ecosystem, the farm brims with biodiversity, cradled by majestic peaks. It’s Raskin Timmangao’s Farm.

At first glance, the farm looks like a jungle. Towering trees. Varied vegetation. Continuously chirping birds. Different kinds of insects. A nearby spring with crystal-clear waters. These scenes pretty much sum up this unique agroforestry project.

Now, how did the farm start? What compelled the farmer to follow the sustainable path of agriculture? Find out more in this article. Read on. 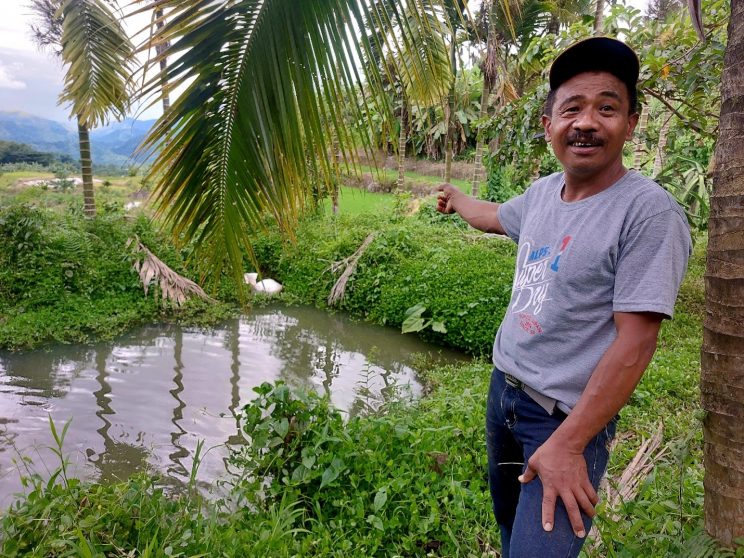 Timmangao passionately shares his knowledge to budding farmers, stressing the unlimited
possibilities one can achieve in the sector. (Daniel Jason Maches)

How did Raskin Timmangao’s Farm begin?

Arnold Timmangao, now nearing 50, has been a farmer for as long as he can remember. He grew up tilling the rice terraces of his hometown together with his parents and siblings. His childhood gave him a realistic view of the tough yet joyful aspects of indigenous farming. These early experiences also showed him the importance of preserving the land to ensure sustainable productivity.

For that reason, he made sustainability a primary factor when he began creating a farm of his own. That was in 2010, when he started planting native trees on a denuded part of a mountain in Natonin, Mountain Province. The land then was almost completely dry and barren, with only cogon grass growing. Landslides were also frequent while wildlife was virtually nonexistent.

Arnold’s dream was to transform the land into an ecological farm and make it a model to be replicated in other deforested areas. Specifically, he wanted to create an agroforestry farm, so after planting native trees as a primary shading, he planted different fruit trees such as lansones, durian, rambutan, and cacao. He also allowed native vegetation, including swamp gabi and many other kinds of edible weeds, to grow on the site.

He also planted different kinds of Arabica coffee such as Mondo Novo and Bourbon. These varietals grow well because the farm sits at an elevation of at least 800 meters above sea level. Arabica coffee can grow at an altitude of at least 700 meters.

Interestingly, the diverse vegetation makes Arnold’s farm cooler, thus, promoting a higher quality of the coffee grown. The coffee also grows well under the shade, which provides not only protection from excessive sunlight but also sustains nutrients for growth and productivity.

Aside from the agroforestry farm, Arnold has another site which is dedicated to growing different aquatic species, poultry, and fruits. 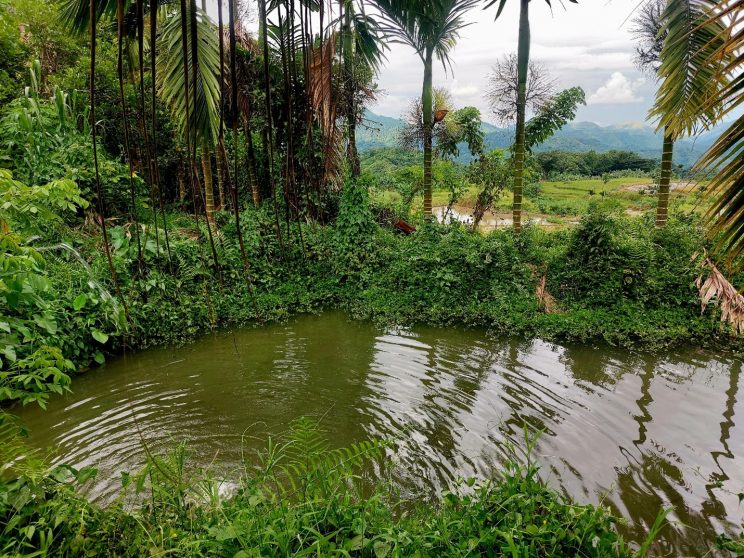 In this pond, Timmangao grows an expensive aquatic species locally called chalet. This is the same type of eel being popularly consumed in Japan and is similar to the native eel species thriving in the local rivers. (Daniel Jason Maches)

Why agroforestry or integrated?

One may wonder how Arnold manages to put diversity into one harmonized setting in his farm. Well, he simply follows the concept of agroforestry or integrated farming including regenerative agriculture, but he gives that a local twist by incorporating indigenous concepts and practices.

For example, instead of exotic fast-growing trees for shading, he uses “habrang” which used to be abundant in the area. In that way, he helps restore the local biodiversity. And since the said trees are deep rooting, they prevent landslides and revive water sources.

He models his farm after the rainforest which allows different kinds of plants and animals to thrive. For him, this is the kind of farming system that should be promoted given the looming threats of climate change. “It’s all about going back to the basics that makes the difference,” shared Arnold.

He adds that the indigenous peoples (IP) have long practiced the concept of agroforestry and ecological-based farming. Core to that is the preservation of the land which the IPs consider as life, and thus, sacred.

He likewise pointed out the healthy interactions of his crops and his regenerated forest. For example, some wildlife such as birds would feast on insect pests. The falling leaves also provide extra layers of nutrients for the crops underneath while helping maintain soil moisture. The organic layers also improve soil composition, allowing the emergence of healthy bacteria which help the plants make the most out of the soil. 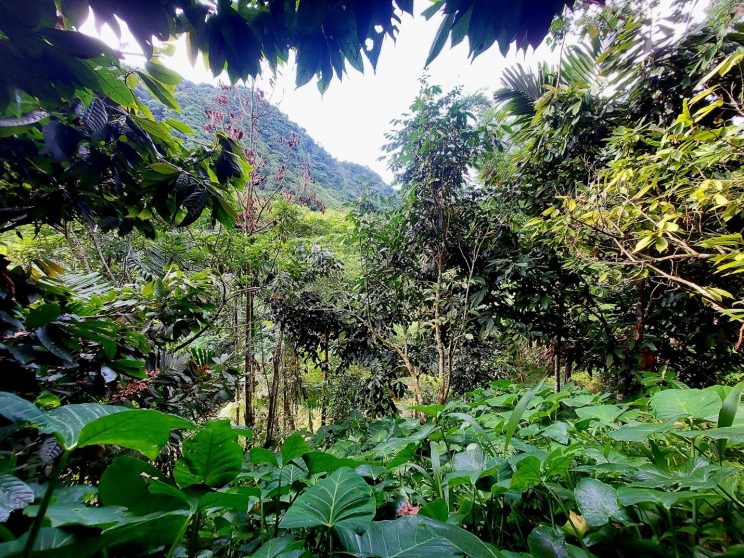 This is a close-up view of Timmangao’s farm under the canopy of different shade trees including native softwood and fruit-bearing species. It resembles a jungle with its own self-sustaining ecosystem. (Daniel Jason Maches)

“For me, it’s not all about the money. It’s about the impacts that you can have to the community and the corresponding fulfillment you get,” enthuses Arnold.

He mentioned, though, that agroforestry is a profitable venture. He stressed, however, that it can take years to realize profit. But once that happens, earnings flow for the long run.

Arnold shared that for his lanzones, he earns around P50,000 per annum while his rambutan yields around P30,000. His dragon fruits likewise earn him P30,000-50,000 yearly. Add to that his income from other crops and his poultry and livestock.

“I’m happy that I’m able to earn from what I’m growing and producing. But for me, what’s more important is that I’m enjoying what I do while contributing to community development and environmental restoration,” shared Arnold.

Another venture he’s focusing on is raising river eels, locally known as chalet (Anguilla luzonensis). These eels are a favorite local delicacy and can fetch up to Php. 700 per kilo.

Agroforestry farming can pose a lot of challenges, according to Arnold. He shared that some locals mocked him for planting native trees instead of a commercially viable species. Others doubted if his proposals would work, especially when he was just starting out.

“You cannot be a prophet in your own community. Instead nga supportaran daka ket isu da pay mangguyud kanyam (Instead of supporting, some members of your community will drag you down). It’s biblical,” said Arnold.

He added that many of the locals are aware of the farm but none are visiting to inquire on how he is doing things. He finds it ironic that it’s mostly outsiders who are coming to the farm to learn and try to replicate his model. Other challenges include lack of support from the local government unit (LGU, though he shared that the LGU provided minimal interventions).

He is hoping the local tourism will also help promote initiatives on agroforestry and sustainable agriculture so that other farmers will follow.

7 heartwarming farm-themed movies for the family this holiday season