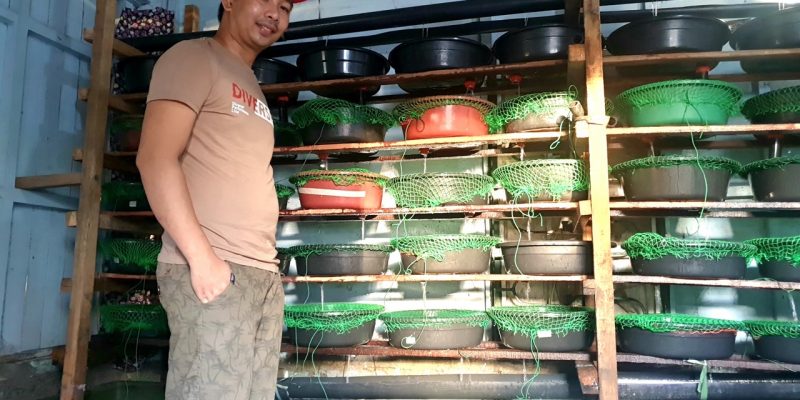 Jenard Carlos poses for a photo before a rack of crabs in plastic wash basins inside his facility in barangay Bagna, Malolos, Bulacan. (Oliver Samson)

When the crab spreads out and raises its claws, it’s possibly getting starved, said Jenard Carlos, who fattens crabs indoors. When it demonstrates a calm bearing with both chelipeds tightly folded against its body, its gut is likely still full, he adds.

Carlos, 32, taught himself vertical indoor crab fattening for two years. He explored YouTube for content touching on the practice and chanced upon videos in the Indonesian language. 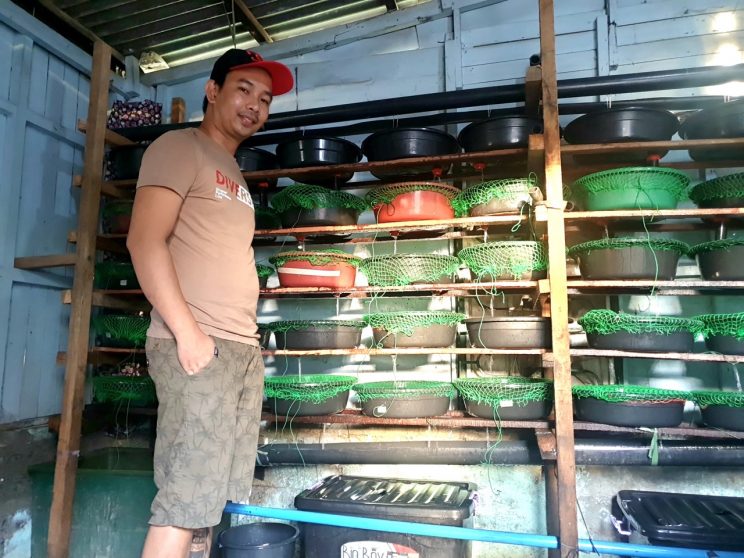 Jenard Carlos poses for a photo before a rack of crabs in plastic wash basins inside his facility in barangay Bagna, Malolos, Bulacan. (Oliver Samson)

Coming from Namayan, a coastal and fishing barangay in Malolos, Bulacan, more than 30 kilometers north of Manila, he already had some know-how and skills in tending to crabs before he began researching online for knowledge and skills on vertical indoor crab culture.

Motivated by a deeply entrenched interest, he self-studied the technology by watching content in Bahasa Indonesia, the Indonesian tongue.

“I tried to figure out what they were communicating by reading through the motions of their hands,” Carlos, who speaks no Bahasa, said in Filipino.

Vertical indoor crab fattening calls for a full-time commitment, Carlos stressed. If one doesn’t have adequate time for it, all the money and labor invested will just soon be frittered away.

He got the opportunity to venture in indoor crab fattening in barangay Bagna, Malolos, after he lost his job in the utility services at the Veterans Medical Center in Quezon City. 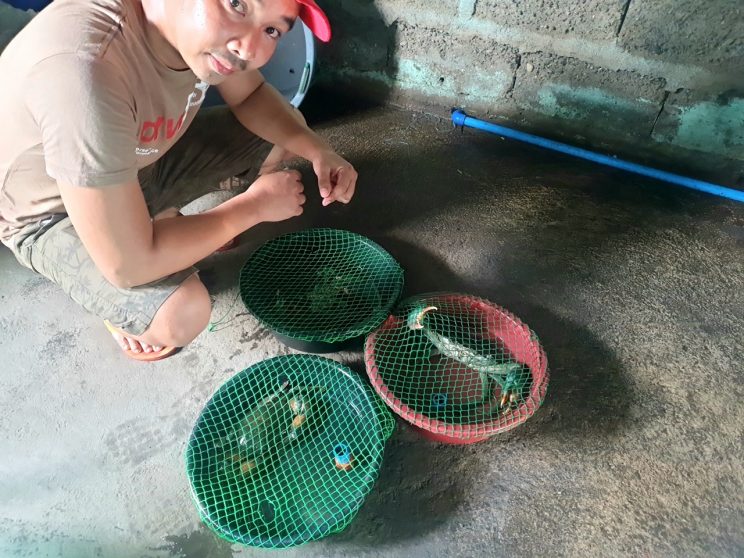 Carlos buys the crabs that he fattens indoors from the fish market in Malolos. In selecting crabs, he makes sure the legs and claws of the crustaceans are intact.

He also rejects crabs that have been pressed between fingers a number of times. The repeated pressures on the body is stressful and lethal to the crab.

Stress can trigger loss of appetite in crabs and parting of legs from the body, Carlos explained. When the legs start to detach from the body, the crab will eventually die.

Rain and wind directly hitting the crabs are also stressors, he added.

“But most of the crabs I start to fatten are three months old because they are robust,” he said. “Five-month old crabs take a longer period of time to fatten, usually 25 days.”

He usually harvests the crabs after 15 days under his fattening program.

The 300-gram crab that he buys from the fish market can weigh from 400 grams to 450 grams during the harvest.

Carlos is sourced for his crabs by dealers from Quezon City and Valenzuela. The dealers sell the crab to restaurants and exporters in turn.

“But for export quality, the crabs are fattened up to 20 days or more,” Carlos said.

But the “bayugin” are the most expensive crabs, Carlos noted. He described them as crabs that have an underside flap or apron that is not characteristic of the male nor the female.

The male crab has a narrow and triangular underside flap while the female has a bigger and rounded one. The underside flap of a bayugin crab is a combination of both. 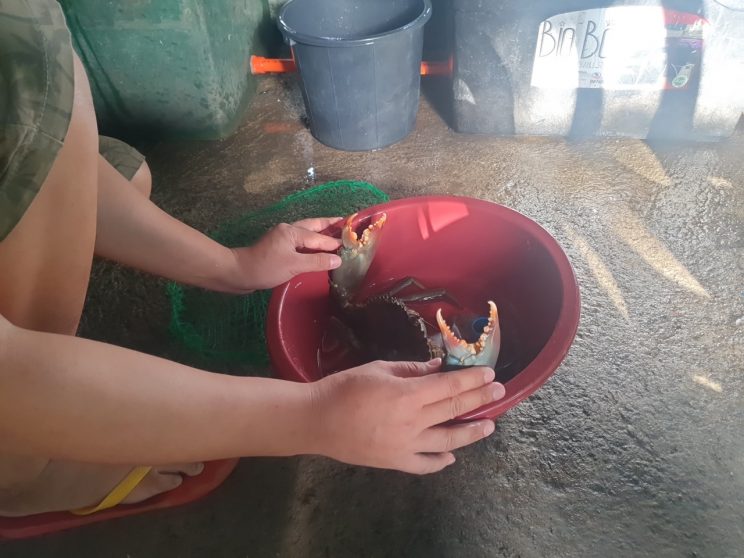 Jenard Carlos holds a crab in aggressive form by the claws. (Oliver Samson)

Carlos supplies his crabs with brackish water he fetches from a river that is accessible by a three-minute drive from his place.

“Brackish water is the natural habitat of crabs,” he said. “I replace the water every five days to seven days.”

Carlos also stores plastic bags of salt to ensure that he can always supply the crabs with a good living environment.

This is because when a heavy rain joins the river, it reduces the saltiness of its brackish water, requiring him to add some salt to the water he fetches from the river to restore the salt level. He can tell when the saltiness has been revived by dipping his finger in the water, then tapping it on the tip of his tongue.

“The crabs will die when the brackish water loses its saltiness,” he said. “I use a lot of salt during the rainy days.”

The brackish water from December to March is good for the crabs in vertical indoor culture, Carlos shared. The water looks greenish. But it’s bad for the crabs when the water turns murky. Murky water means its salt content is depleted. When this happens, he filters the murky water a number of times until it turns clearer, then he drops amounts of salt to restore it to its brackish state.

But dipping the crabs in the brackish water is not enough. Ammonia builds up in the water under a controlled environment.

Ammonia poses as the number one threat to the survival of crabs in vertical indoor culture, Carlos pointed out. The leftover that has stayed for more than five hours in the water together with the crab is lethal.

“For example, if I fed the crab at seven in the morning, I should have already removed any leftovers from the basin at 10 in the morning,” he said. “The leftovers become poisonous after more than five hours in the water.”

Carlos feeds his crabs with fresh and raw oyster, mussel, ponyfish, milkfish, and other fish that he forages at the fish market for free.

“In vertical indoor crab fattening, the feed should submerge in the water,” Carlos said. “If the feed floats, the crab is not going to eat it.”

He tosses 10 grams of feed into the plastic wash basin that holds the crab under his vertical fattening program two times in a day. He feeds them at seven in the morning and seven in the evening, allowing the crustaceans to digest and absorb the nutrients within an interval of 12 hours.

A decomposing fish discharges large amounts of ammonia, contaminating the water and exposing the crabs to ammonia poisoning in effect.

Carlos recalled five of his crabs died when he replaced the water after eight days. Deadly amounts of ammonia build up beyond a seven-day period.

“I recommend replacing the water every five days,” he said.

Carlos simulates the natural habitat of crabs. He fattens the crabs in an enclosed and darkened house. He prevents the crabs from getting exposed to sunlight for a long period of time.

“They are basically nocturnal in their natural habitat,” he said.

He tosses the feed into the water, then he switches the light off. The crabs take their meal when the light is off. 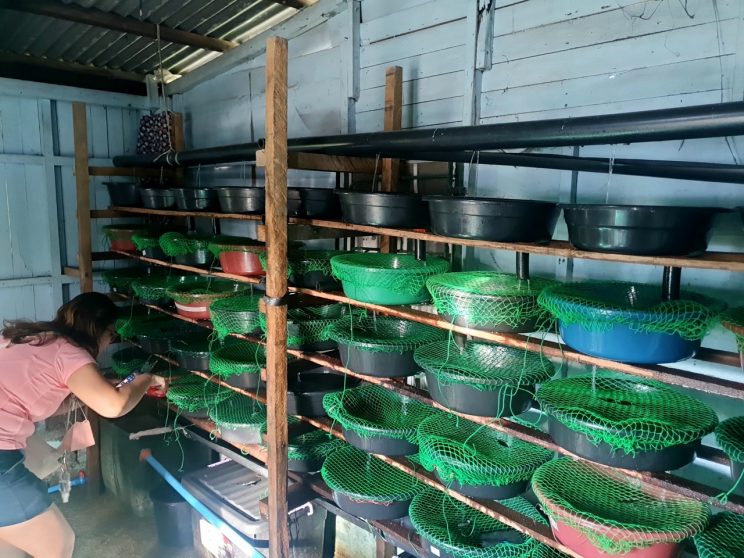 Crabs under force molting occupy the plastic wash basins on the top floor of Carlos’ rack for vertical indoor fattening. He forces them to molt ahead of their natural period for shedding shell.

Crabs have a hard shell that covers its body called exoskeleton. The exoskeleton doesn’t expand, preventing the crabs from growing to a bigger size. So, the crab sheds its exoskeleton to develop a new and bigger one that will allow it to grow bigger. The process is called molting, and crabs have a natural period for this process.

But humans can put pressure on the crab to molt ahead of their natural period through a technique referred to as force molting.

“I remove all the legs, leaving the two claws,” Carlos explained. “I learned force molting also from the Indonesian videos.”

Carlos produces export quality crabs through force molting. He is looking at increasing the number of crabs being fattened in the coming months.

Just recently, he ventured into cooking mixed seafood. The food is a blend of mussels, shrimp, spotted crabs (alimasag), and his own crabs. So far, he’s doing well in his new venture.

“I make more money in cooking and selling my own crabs than [in] selling them to crab dealers,” Carlos said. 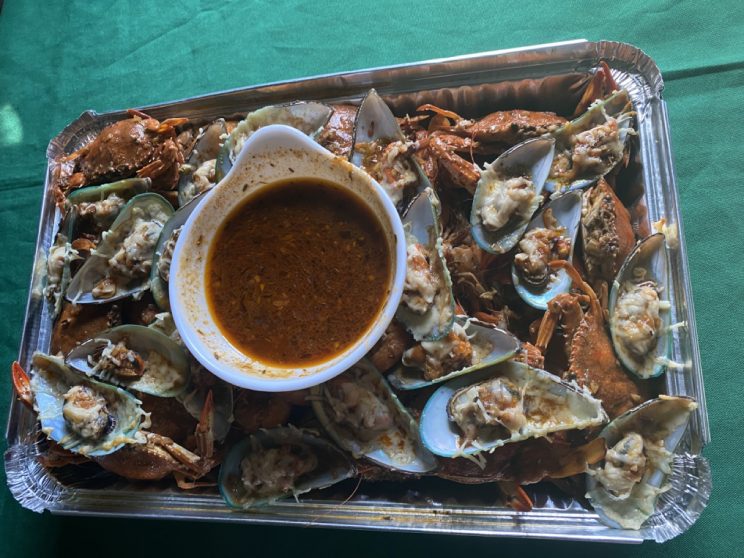 A sample of Jenard Carlos’ mixed seafood cuisine. The mixed seafood is a blend of mussels, shrimp, spotted crabs (alimasag), and his own crabs located at the bottom of the mixture. (Oliver Samson)

Carlos had been invited to talk on vertical indoor crab fattening in Cebu and Surigao, but he has declined since there’s no one yet who can properly tend to his crabs during his absence.

His vertical indoor crab culture had been copied in Malolos but did succeed due to lack of proper knowledge and skills.

“It needs you full-time,” Carlos said. “If you are employed or doing something else,  you should have one who can properly take care of them when you’re away.”

Emerging trends that may shape global agriculture this 2023