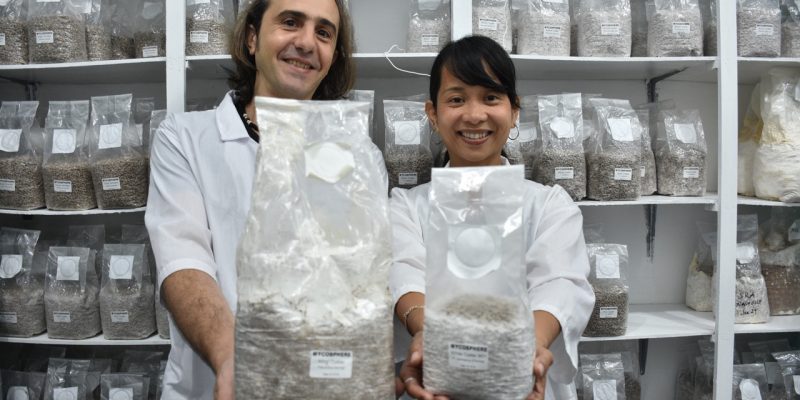 Mushrooms are a tasty and nutritious part of the Filipino diet. Its high market demand has made it a popular crop for both folks who want to try their hand at farming as well as longtime farmers looking for ways to earn extra income.

There is a huge demand for mushrooms in the Philippines, as it is an essential ingredient in many cuisines. All of the oyster mushrooms in the country are locally grown since it is prone to spoilage. About 25% or less of shiitake mushrooms, which are commonly seen in Chinese and Japanese dishes, are grown locally. Other varieties like button, king oyster, enoki, makitake, and shimeji mushrooms are about 99%, if not 100% imported. This means that there is potentially a large market for local growers to tap.

One of the most important aspects of starting a mushroom farm is acquiring high-quality mushroom spawn, which is the industry term for mushroom seeds. 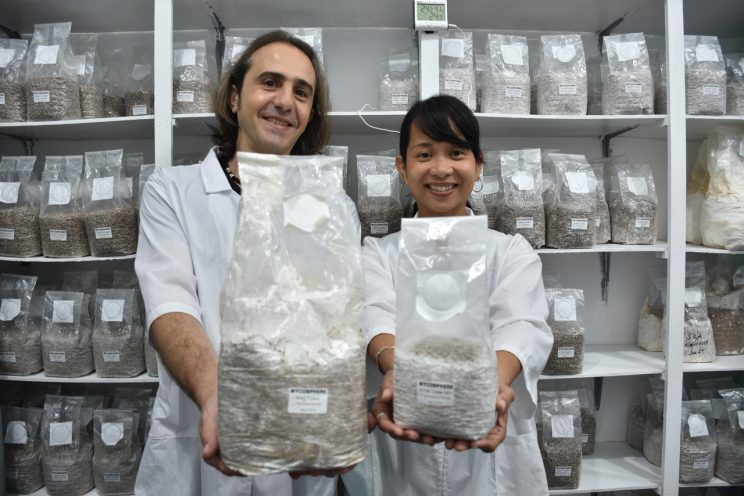 Mycosphere Laboratories is a company that specializes in the production of different varieties of mushroom spawn, from the common but extremely in-demand oyster mushroom to exotic (for the Philippines) varieties like lion’s mane (Hericium erinaceus).

The company started in 2017 and is founded by Kayen Bernardo (director) and husband Victor Sala (production and marketing), a Spanish national. “We produce… our spawn… in our laboratories in CLSU (Central Luzon State University) and deliver it all over the country to mushroom growers,” Sala says. “…most of our production goes to white and brown oyster spawn… and we also introduced… other mushrooms like shiitake, lion’s mane, yanagi matsutake (Agrocybe aegerita) or pioppino mushrooms, and many other different species [of]  medicinal, edible, and gourmet mushrooms.”

The couple had been working with mushrooms long before Mycosphere Laboratories was conceived. They started with Ministry of Mushrooms, which was founded by AgriMover recipient Marco Lobregat and is known for bringing mushroom farming into the public eye. Sala also worked for big mushroom companies in Spain, Belgium, France, and Taiwan.

They identified that a common problem in the Philippine mushroom industry is the lack of reputable sources of mushroom spawn. “…we have seen that in other countries, one of the main solutions for this is they have [one] or two dedicated companies that… serve spawn specifically… because it takes a special laboratory, special equipment, and special knowledge to have it done properly and consistently and at a price that’s low enough for [farmers] to be able to afford… This was the main idea and that’s how we created Mycosphere,” he adds.

They also saw the need to grow their own mushrooms to be better able to offer their clients tips on cultivation and troubleshooting. “They can see the photos, they can visit our laboratories,” Sala says. “We don’t hide any secrets on how to grow the mushrooms because our interest is that they grow successfully and [clients] can keep the relationship with us for a long time using our spawn, trusting that the mushrooms will always grow.”

The company has over 300-400 clients that range from small to medium to large scale growers. “Some of them, they just grow some mushrooms at home, some of them, they have 10 or 20 or 30 workers and they are producing hundreds of kilos every day.” Customers buy spawn on-site, or online through the company’s Facebook and Shoppee pages. 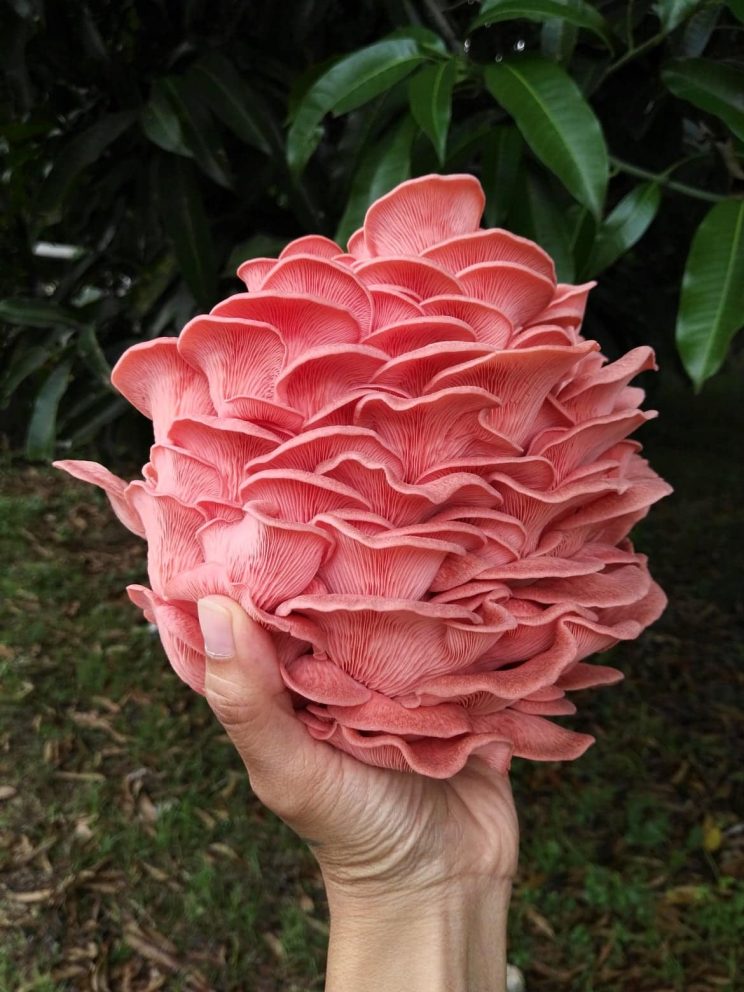 One thing that Mycosphere is proud of is their fruiting bags, which have been specially developed for mushroom production. “Of course we invest a little bit more in the quality of the product,” Sala says.

They’re used in the grow bags the company sells and are also sold wholesale to clients who want to grow mushrooms from scratch. Sala estimates that they produce over 1000 bags a month. “After seven days, they are already selling the mushrooms from these bags,” he says. “It’s easy and they [can] also learn… to make their own [fruiting bags], in which case we will also help them. We can help start from any step of the process. The only little secrets that we keep is… spawn making, mostly because it takes many many years and a lot of money, equipment, and learning to get to our state in small production.” 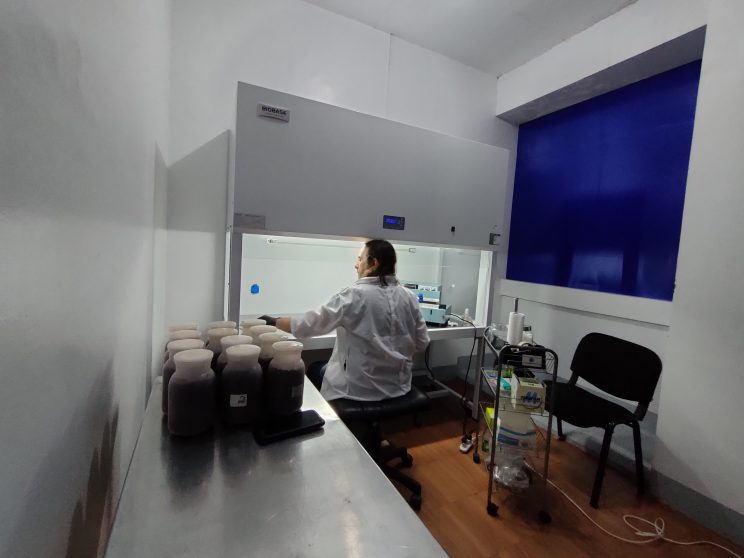 All industries have specific challenges, and mushroom farming is no exception “…Different mushrooms have different technologies, from the preparation of the spawn to the substrate, the cultivation, and even the marketing as well, so every mushroom needs its own research, its own line of production,” Sala explains. “…so every mushroom has its own different challenges.”

Other challenges include adapting specialty mushrooms to the local climate, finding a source for substrate ingredients that may be hard to find in the country, and generally needing to find ways to adapt to available factors and resources.

Mycosphere has invested a lot of resources, including time, research, and equipment, in tackling these challenges. “…it’s just a matter of working hard and taking a lot of data [from] every mushroom, and learning. We have experience for over 10 years in mushrooms and we also have contacts in other countries that have been our friend or our clients or our mentors at some point, so we try to learn as well from everybody,” Sala says. “…[like] any regular challenge of any startup company…, we need to find some funding, we need to do everything ourselves without workers.”

This also means introducing a product to the market takes time, not only in terms of research and production, but also in educating potential customers. “The most important thing about our company is all the preparation our spawn takes, from the initial culture to the final product,” Sala says “…it’s difficult right now for most growers to understand the difference from the product that they’re used to making on their own or to buying these ketchup bottles where they buy the seeds of the mushrooms.”

He admits that Mycosphere’s products tend to cost more than most of what’s in the market, but that it’s more cost-efficient in the long run, especially given the company’s thrust on after-sales service. “…in the beginning, they think it’s expensive because they don’t know how to make their calculations of how much in the long term they can save by using our products,” he explains. “…at the same time, they buy even if it’s only one bag from us, they start getting our advice, our consultation, all of these things that probably cost more than the spawn itself that we give for free, but it’s our way of helping them stay up with our production and understand that it’s probably better for them to focus on their substrate production, sales, marketing, and leave this delicate work to us because it’s our specialty.”

Plus, as of the interview, they are the only local company that offers specialty mushroom spawn like lion’s mane, yanagi matsutake, and chestnut mushrooms (Agaricus bisporus). 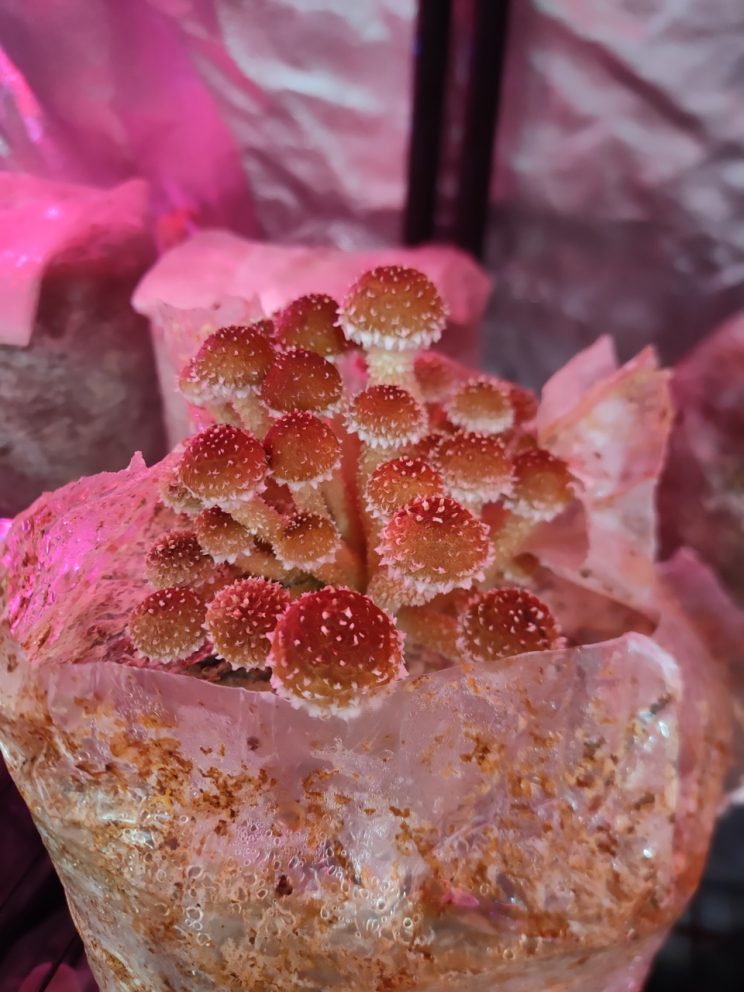 When asked what he thinks the potential of mushroom farming in the Philippines is, Sala says, “I have replied to that question over the 12 years that I am here so many times, but every time, it’s different. Today I will say that it is the best state that we have seen. It is improving …and for sure it’s getting better.”

His past work with Ministry of Mushrooms helped introduce the mushroom industry to the mainstream public, something that all mushroom cultivators continue to benefit from. “Before, it was kind of hard to sell all their harvest. Nowadays, the production is really big because they were able to create new products, to find new ways to bring the products to the market, nowadays we have better delivery systems, we have better machines,” he says.

Still, as with any industry, there is always room for improvement. “It would be nice if some of them were open to suggestions, to mainly see what [farmers] do in other places, [and] to learn from each other instead of trying to be too secretive,” he says. “But the thing is, with the mushroom industry, a lot of things [have] changed already, and luckily, nowadays, there are a lot of people who are happy to share what they know.” 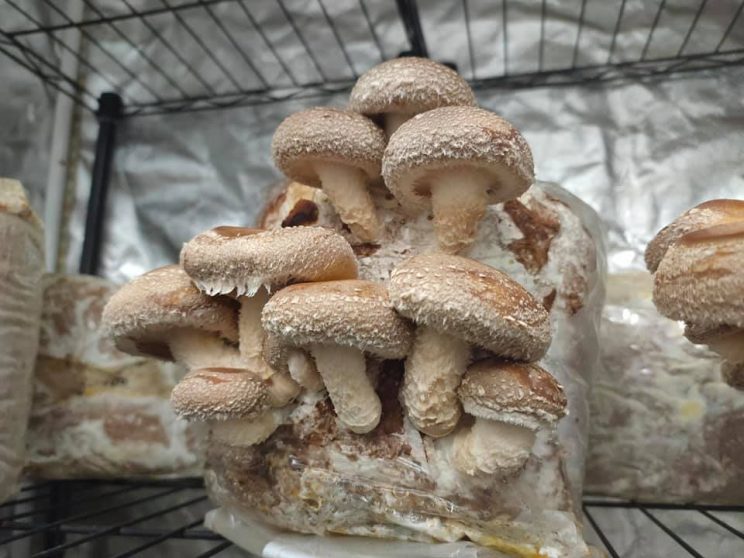 There’s a lot in store for Mycosphere Laboratories. Many of their plans had to be put on hold because of the pandemic, but now that the world is opening up, clients can expect new developments soon. “…we’re increasing our production for grow bags to be able to supply more growers with grow bags [so]that they can grow the mushrooms faster and in a more secure way,” shares. “…we’re making a new line for substrate production, and now we’re also starting to do production of button mushrooms.”

He further shares that despite the massive number of button mushrooms consumed by the Philippine market, it isn’t something that’s produced locally. “It’s a very different type of mushroom. It requires different technology. We would require new equipment, new rooms, new R&D, but it has a lot of potential in the Philippines because nobody’s doing it,” he shares.

The people behind Mycosphere Laboratories have high hopes for the Philippine mushroom industry. For them, just having mushroom farmers fulfill 100% of the local demand is a huge and exciting goal.

“…we want to really have the Philippines to be… self-sufficient in mushroom cultivation because it can be a multi-million industry that can reach a lot of people, from rice farmers up to our laboratories here, up to restaurants,” Sala says. “Everybody can benefit if we start cultivating our own button mushrooms, because even the imported ones cannot be enough for the consumption of the Philippines, so we should be able to make this industry happen, even if it takes another five or ten years.”