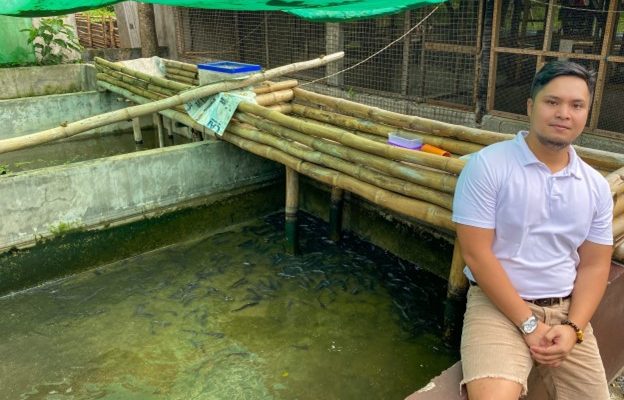 Joseph invested his crypto gains into catfish farming as a new source of income. (Joseph Miranda)

Cryptocurrency, or crypto, is currency that exists digitally and is designed to work as a medium of exchange through a computer network. It’s not upheld nor maintained by any government or bank and uses a decentralized system to record transactions and issue new units.

When crypto first emerged, people were doubtful about investing into money you couldn’t see or hold. But computer parts shop owner Joseph Miranda took the risk. He took to crypto and started crypto mining, investing in non-fungible token (NFT) games and managing a Bitcoin buying and selling business. When the pandemic hit, crypto hit a historical peak and Joseph prospered.

When crypto started to decline, Joseph had to find something new to invest his time, money, and energy in.

Joseph had always been fond of animals. He had seen fancy chickens while scrolling through Facebook and instantly took an interest. He thought of his father’s unused 8500 sqm land in Sta. Maria, Bulacan and decided to finally make use of it. 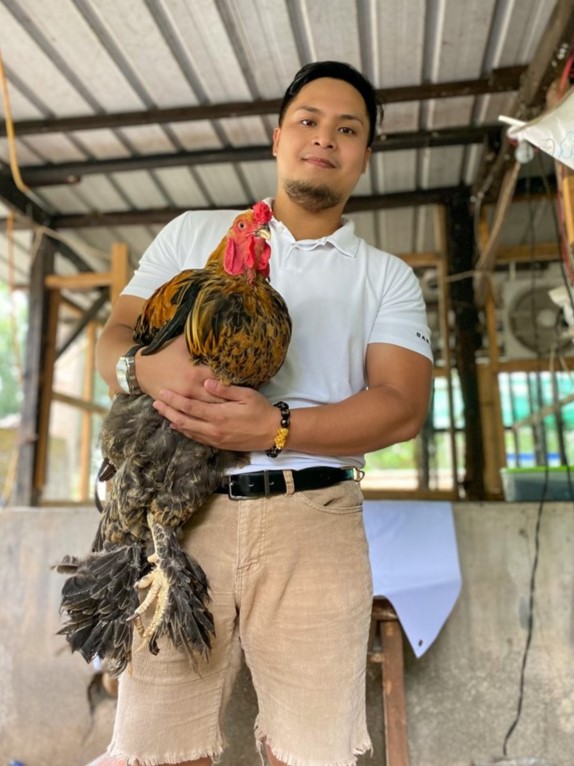 The Brahma Rooster ‘Johnny,’ one of the fancy chickens that started it all. (Joseph Miranda)

“Whatever chicken I thought looked nice, I bought it,” Joseph said in Tagalog. His first fancy chickens were Brahma and Polish chickens, and he built a home for them in Sta. Maria. He then saw potential in the land and decided to turn it into a new source of income.

“Sometimes when we want to make a profit, we [should] use the most available resources to us. So, I thought, ‘This [land] is here. It just needs a bit of renovation and let’s see if we can profit.’”  Soon enough, Joseph purchased goats, ducks, rabbits, egg-laying chickens, crayfish, and catfish. Sesep Farm was born. 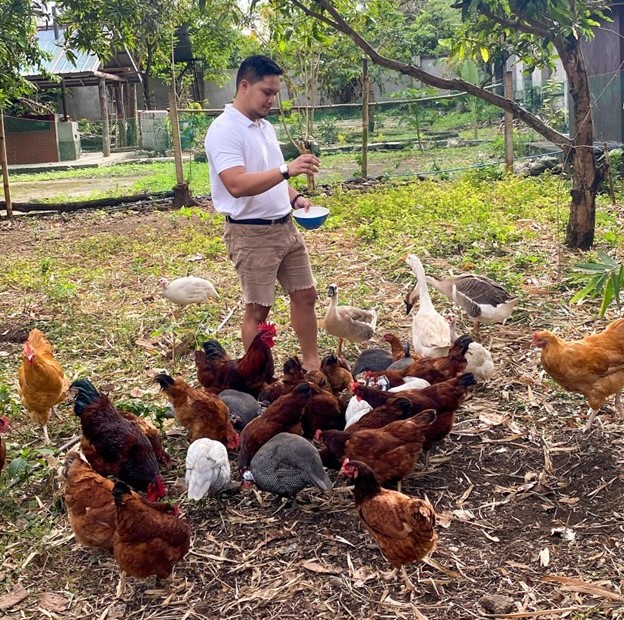 Before it became Sesep Farm, the land was used to keep pigs. Joseph researched on ways to make use of the already built cages and came across catfish, or hito, farming. He decided to invest in catfish because he had heard that he could turn a profit in as little as three months.

“In crypto, it’s high risk, high reward. For me, that is where I associate [catfish]. In crypto, you buy low then let it ‘ripen’. Then after a few months or years, you’ll gain a big [profit].”

Joseph started his catfish farm with 5000 fingerlings which he bought at P1.5 each.

But as an Information Technology graduate, Joseph had no prior experience with farming nor had he any knowledge on raising catfish. He heavily relied on videos and other online resources to learn. He also asked for tips from catfish vendors as he bought his first fingerlings.

“As time went on, a lot of what I learned was through experience,” he said. “That’s when I learned that on YouTube, people always post ‘perfect scenarios’. It’s not always like that. You’ll encounter challenges.”

Joseph renovated nine old pig pens into catfish cages, or concrete ponds, for his new venture. Eight of these are for catfish, while one is for crayfish. Unlike other farmers, Joseph did not have running water for his cages, so he used the regular water supply. He is also having a deep well built to source water for his aquatic animals.

He used to own ornamental fish, so he used that knowledge to install filtration systems and UV lights for the delicate fingerlings. The cages also have solar-powered pumps and lights.

The cages use an aquaponics filtration system. The water from the cages rotates to a grow bed where he planted tomatoes, sili and other plants and back to the tank. 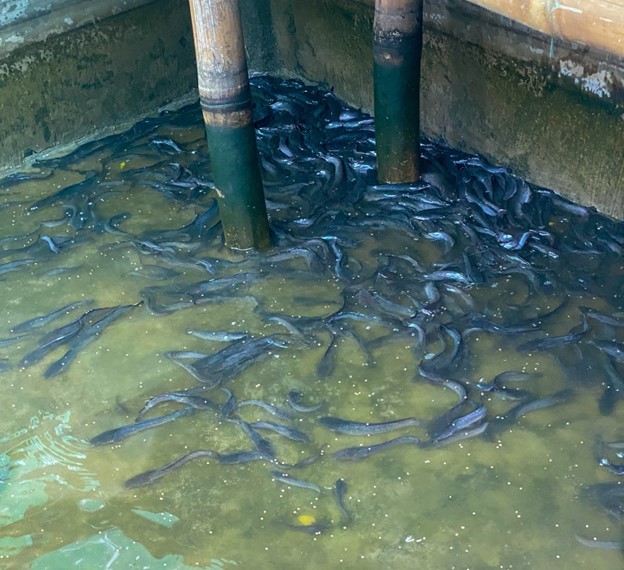 Joseph explored many ways, both traditional and innovative, to find the best method to care for his catfish. (Joseph Miranda)

The catfish are fed with catfish feed three times a day. Joseph refuses to feed dead animals to his catfish even though he knew it would help them grow quicker.  He said, traditionally, catfish farmers feed dead animals to catfish because it’s the food that catfish really prefer, and it is also the cheaper option.

“It’s for hygiene,” Joseph said. “I want [the catfish] to be clean. Even though I’m sacrificing profit, I choose the cleaner option.”

Since catfish are carnivores, Joseph made sure to sort the catfish by size every two weeks to a month. This is because when catfish grow big enough, they become cannibals and eat their smaller kind. If catfish aren’t sorted frequently, by the end of the harvest there will only be few survivors.

Joseph applied many of the lessons he learned from online resources and webinars into his catfish farm, but he could still see gaps.

The videos that introduced him to catfish farming said that catfish could be profited off in as little as three months, but he said that the videos failed to mention that those were special cases of fast growers. He realized that in 1000 fingerlings, there were probably only as little as four fast growers, which didn’t really make much of a profit.

He learned from experience that the average catfish only grows into a marketable size by four to five months. “The experience is different from what you watch,” he said.

Because of this, Joseph says he only takes half of the lessons he got from videos and innovates the other half.

He adapted catfish farming methods from other countries such as Germany’s recirculating water system and India’s stocking system. He heard that for every square meter, there should only be 10 catfish. But he learned that he could keep 30-50 catfish in a square meter as long as the water is changed more frequently.

He took his experience from crypto and created charts and tables to track his catfish’ growth and determine the best way of care.

“I don’t really tell others about [my methods], especially to other catfish farmers because I feel like they might bash me.” Joseph said. He admits that he chose more expensive methods, but he is happy because he developed his own unique farming and breeding methods.

From Catfish Farm to Catfish Market

Joseph’s catfish farm is young, but he’s already had a harvest. 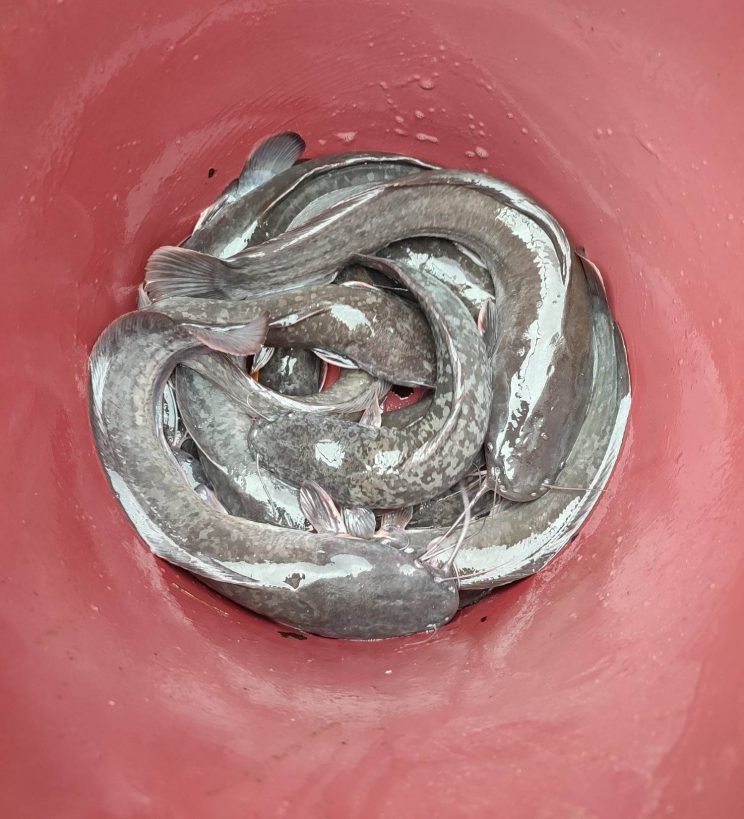 After months of trial and error, Joseph’s catfish are healthy and ready for harvest. (Joseph Miranda)

He uses agents to sell his harvests. Catfish is usually sold at P180 per kilo, but Joseph sells his for P110. His clients are usually locals of Valenzuela City, where he lives.

He plans to continue investing in the farm until it can finally be big enough to be a catfish hatchery. As soon as he achieves this, he plans to apply for accreditation at the Bureau of Fisheries and Aquatic Resources.

Nevertheless, Joseph already finds happiness in his budding farm. “I am happy even though I’m not yet profiting,” he said.

Challenges of a New Farmer

Joseph had only been a farmer for six months. He says that his farm isn’t much of a business yet because the last six months were full of experimentation.

“My first struggle was when they got sick,” he said. “When catfish get sick, it’s overfeeding. Their growth is delayed, and they die.”

After solving that problem, Joseph faces a new one. “Because catfish are carnivores, they have to be sorted by size. We didn’t sort. We were happy that they were healthy, but when we drained the cages, we found that out of the 5000 catfish, only 400 survived.”

He learned from his mistakes, and now his catfish farm is smooth sailing.

However, Joseph admits that he has a long way to go. “If we pretend that 100 percent is [the scale of] mastery, then I’m only at 50 or 60 percent,” he said. “I haven’t been a farmer for even a year yet. They say it takes five years to master something, so I can’t say I’m already great at what I do.”

He uses Tik Tok as a way to document his journey as a farmer and he enjoys the feedback that he receives from comments. He said that in terms of marketing, Tik Tok helps his farm greatly. However, he isn’t on Tik Tok to market his catfish, and his farm isn’t big enough to take the orders of people who have reached out to him. He just wants to share the growth of his farm and of himself as a farmer.

While his farm is still growing, Joseph continues to invest in crypto and manage his computer parts shop. “I’m happy,” Joseph said. “I was interviewed before, too, but for crypto. It feels like a new part of my life now that I’m interviewed about my farm.”

Six months ago, Joseph had no idea how to start a farm, but his hard work and perseverance paid off. He said that people starting in similar situations should start small and start wisely. With the same attitude he had with crypto, he advises,

“Patience before profit,” he said. “Farming is a process.”