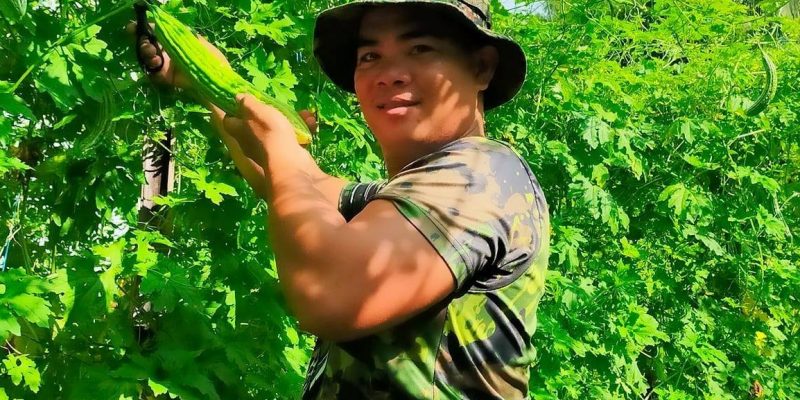 Romy is an investigator for the Badiangan Police Station of Lambunao, Iloilo. In 2019, Romy decided to deviate from his usual routine as a policeman and explore the land behind his home. He decided to invest into a genuine interest and passion of his: farming.

“It is a hobby, and a bit of [a business]. Of course, I am a policeman. I have a regular salary so we can call this an alternative source of income,” Romy sayid in Tagalog.

Romy saw potential in finding profit in his passion and started planting various vegetables in a 3000 square meter land. Three years later, it has grown into more than a hectare and has taken the name Police Farmer Farm.

Throughout his three years as a farmer, Romy explored many crops. “Just like those in [the song] Bahay Kubo and every ingredient in pinakbet,” he said. Romy currently has tomatoes, atsal , bell pepper, siling panigang, cucumbers, palay, eggplant and his best seller, ampalaya. 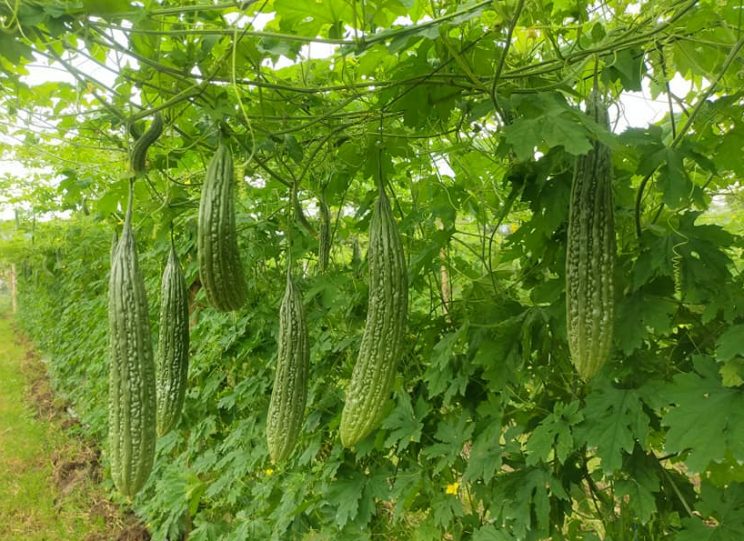 As a Criminology graduate and policeman, Romy didn’t have prior experience with farming. He took to YouTube and immersed himself in different farming tutorials and resources to learn how to start his own farm. Romy was a persevering learner and found many farmer-vloggers and regular farmers to guide him.

Through learning online and from experience, Romy grew his farm into a successful supplier of ampalaya, eggplants and other crops in Lambunao. It was in 2021 that Romy found a new vocation– to educate.

He created a YouTube channel and named it Police Farmer TV to become a teacher himself. It became a new passion of his to create general tutorials on how to manage a farm and to educate other farmers on his own farming methods.

Romy is consistent at creating content. He uploads a video every day, despite having to go to work at the police station every two days. At times when he is at work, Romy prepares a pre-recorded video in order to keep up with his schedule of daily uploads.

“My purpose is to inspire other farmers,” he said. “I am not an agriculturist. My course was Criminology, but it happens that farming is my passion.”

Romy knows his videos reach a lot of farmers, both veterans and newbies. He has fans who look forward to his videos because they know that they can pick up different tips and lessons from his tutorials.

Romy said that his online persona as Police Farmer TV contributes greatly to selling his crops.  “The popularity is there and our harvests get bought quickly,” he said. ”When we post [our harvests] on Facebook, there are buyers immediately.” 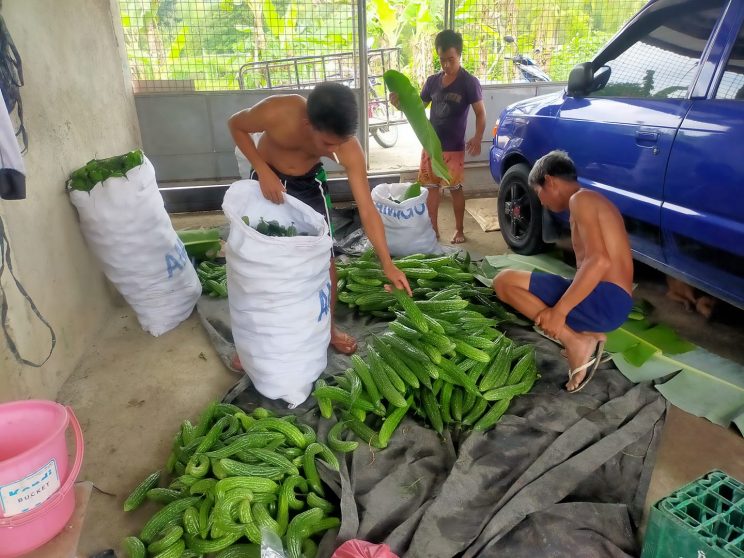 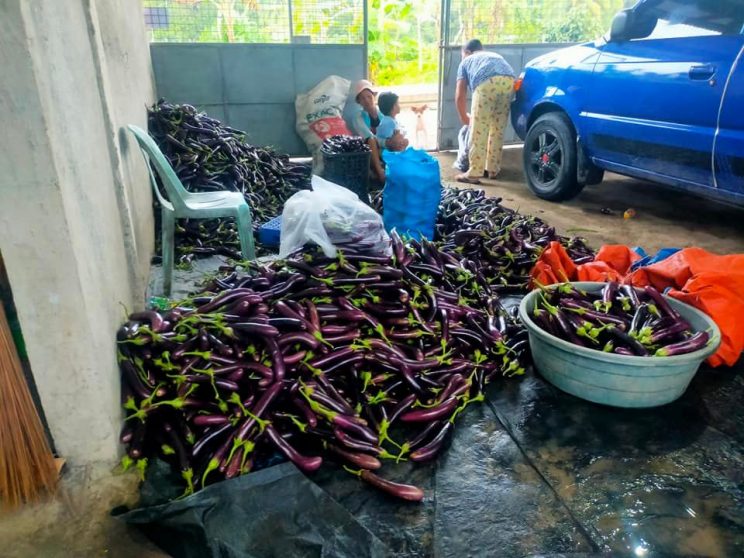 For the past three years, Romy has been the go-to for ampalaya and eggplants in Lambunao. (Police Staff Sergeant Romy Aligante)

Offline, Romy also has a solid client base. Every time there is a harvest, people reach out to him to buy and pick up his crops, rather than him marketing them personally. He sells his ampalaya at 50 pesos per kilo and his eggplants at 50-60 pesos per kilo. 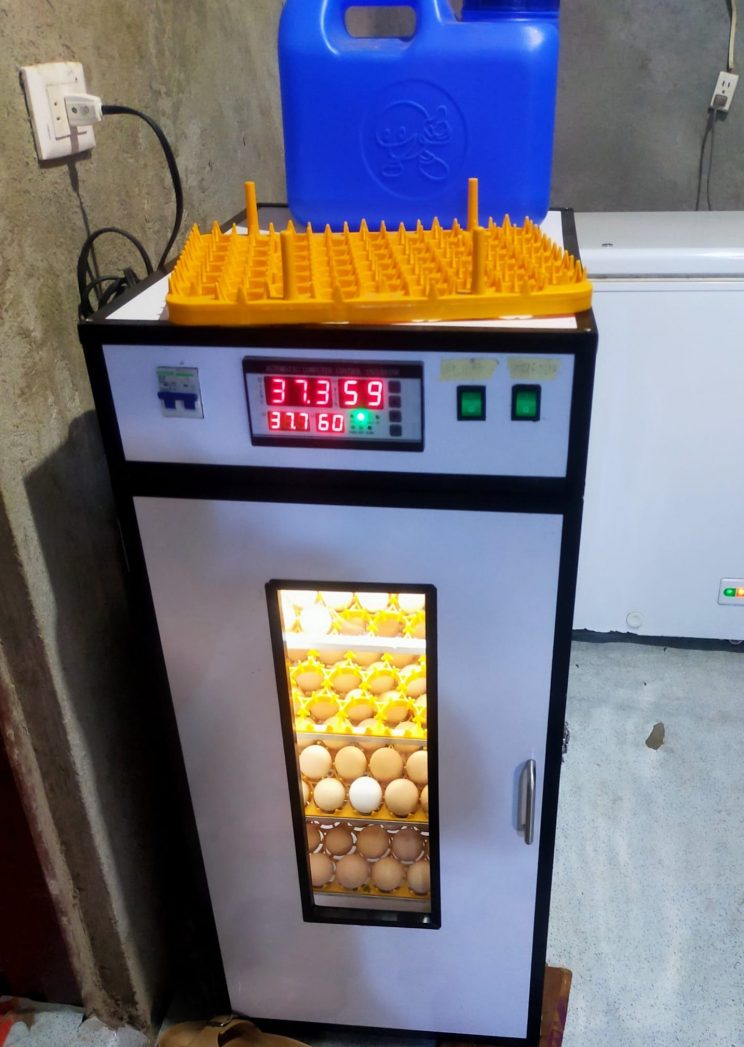 Romy bought an egg incubator so he could venture into native duck and chicken farming. (Police Staff Sergeant Romy Aligante)

Romy also plans to expand his farm into an integrated farm because he believes farming shouldn’t be limited to planting. “If you’re a farmer, you shouldn’t just be planting. You should also farm various animals,” he said. He plans to venture into native chickens, itik (native ducks) and catfish farming as new sources of income.

Romy still holds his position as a policeman, so he tries his best to manage his schedule with two professions. He works for two days as an investigator and takes two days off to be a farmer. Fortunately, he has two stay-in farm helpers to manage the farm while he is away on duty.

When Romy is off duty, he gives a hundred percent to his farm. His farm is conveniently located at the back of his house, which gives him the advantage to closely monitor his crops. He is able to watch out for problems and address them quickly such as whether the crops need insecticides, fertilizers or special care.

“TLC. Tender loving care,” Romy said. “When you [apply] that, of course, your crops will be good.”

Wins and losses of a dual life

As a police sergeant and investigator, Romy still needs to uphold his duty to serve and protect. The division of time and focus has always been a struggle for him, especially when his police duties must take priority. “…there are times when the farm is [neglected], especially when there is a ‘full alert status’ at PNP,” he said.

At the farm, Romy struggles with the high costs of insecticides, pesticides and fertilizers needed by his crops. He has also experienced selling his harvests at very low prices, which put him in a deficit. Of course, he could never escape calamities such as Typhoon Paeng, the large and deadly tropical cyclone that wreaked havoc across the Philippines. Romy’s planted watermelons and ampalaya suffered because of the typhoon.

However, none of these challenges have discouraged Romy from farming. His secret? “Time management,” Romy said. On-duty, he focuses on his obligation and oath as a police officer. Off-duty, he happily focuses on his crops. “I’m excited to get home from work. It’s something like ‘my crops are waiting for me,’” Romy said. “As long as it is your passion, nothing is difficult.” 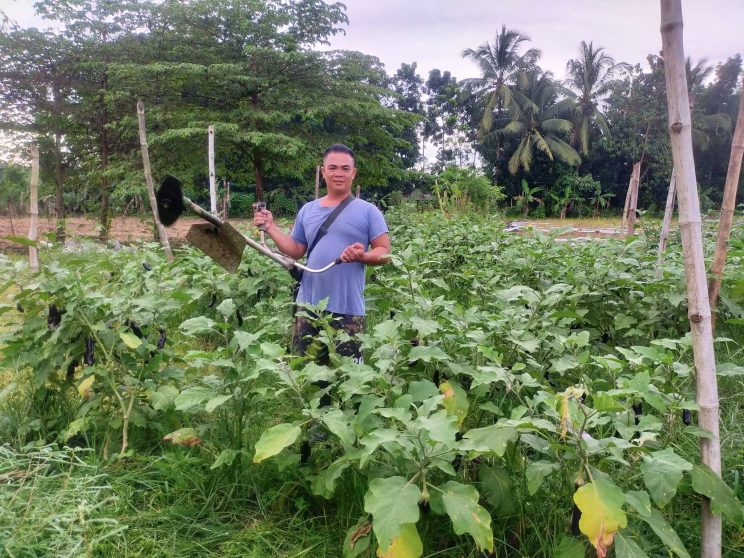 When off-duty, Romy puts 100% of his focus and energy into managing his farm. (Police Staff Sergeant Romy Aligante)

Romy recommends that would-be farmers study and start small like he did. “As farmers, we are scientists of our farm. We are the ones to discover and experiment. Everything is pretty much trial and error.” Romy said. “So to other farmers, start small until you get used to it before you plant extensively.”

He also encourages other professionals to turn to farming. “If you have a small farm– doesn’t have to be big– or a backyard, you should try planting,” he said. “In farming, you can turn a profit quickly as long as you learn.”

Romy is very proud to be the police-farmer that he is. As a holder of a professional position, he lamented over the discrimination farmers face and emphasized that without farmers, the world will go hungry.

“I am proud. I’m not really boasting about it [but] as I always say, I am doing the two noblest professions on earth: being a policeman and a farmer. And I do it at the same time,” he said. “I am proud of myself to have achieved this.”