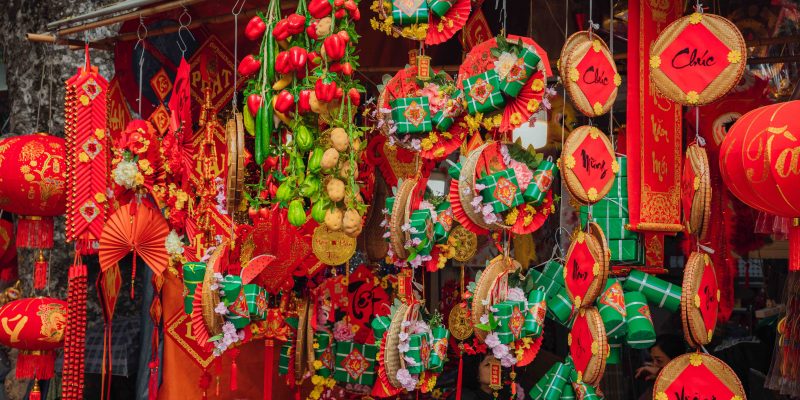 The lunar new year itself is rooted in China’s agrarian culture that has been thriving for several thousand years. The farming calendar cycle starts with new year’s day, marking the end of winter and the beginning of spring. Since the lunar new year is within the beginning of spring season, the other popular term for the celebration is Spring Festival.

Like in many cultures around the globe, the beginning of spring is seen as a time for renewal. In China, farmers clean their fields and prepare to plant new seeds, with the new moon as a marker to plant crops. Because of the differences in the lunar and solar calendars, the Chinese lunar new year changes dates every year and typically falls sometime in January or February.

Unlike the Gregorian calendar, the Chinese tradition sees years in repetitive sexagenary or sixty-year cycles, each composed of five 12-year cycles. Each of the 12 years is represented by the name of a specific animal, such as the rat, ox, tiger, rabbit, dragon, snake, horse, goat, monkey, rooster, dog, and boar or pig. Even though the exact origin of this tradition is uncertain, it is said that it is a reflection of China’s rich spiritual and agrarian culture.

Food is one of the essential elements of the Chinese lunar new year celebration. The variety of cultural cuisines during family gatherings also follows local agricultural practices. Differences in the climate resulted in different traditional staple cuisines for those in the northern and southern parts of China. Those in the south typically plant rice and raise fish, while those in the north cultivate wheat and pasture animals. Hence, the northerners traditionally eat boiled dumplings with meat or vegetable stuffing, while the southerners consume rice cakes. Both traditional lunar new year dishes reflect the rich connection of local agrarian culture with the festivities.

The Chinese lunar new year springs from a rich traditional culture deeply connected with agriculture. As communities eat and celebrate the start of a new year, it is also great to take a moment to reflect on the hard work of farmers to ensure food year-round.

This article is based on the published paper of Western Kentucky University Professor Haiwang Yuan entitled “Origin and Customs of the Chinese New Year”.