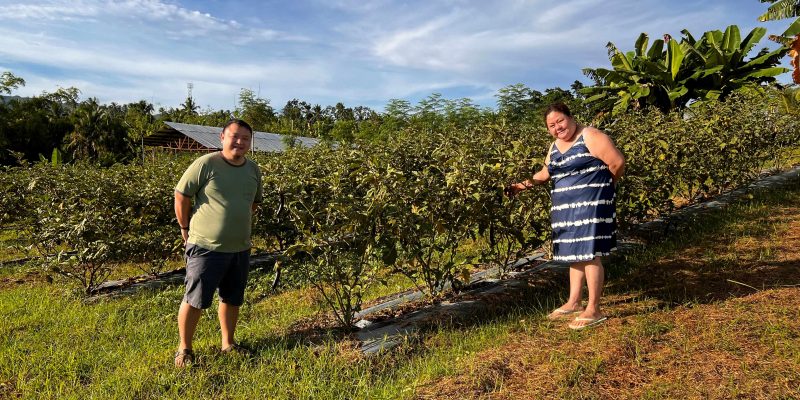 Jessilyn Uy started God’s Grace Farm in 2011 after a relative’s cancer diagnosis led to an interest in organically grown vegetables. What started as a personal project has turned into a successful farm business that she runs with her cousin, Roel Chan. (Roel Chan)

God’s Grace Farm (GGF) is an organic vegetable farm in Barili, Cebu, about an hour away from Cebu City.

It was founded in 2011 by Jessilyn Uy, a businesswoman with a background in marketing and the automotive supply industry. Her interest in organic farming began when a relative was diagnosed with cancer, prompting her to research organic food sources. “It’s really for their own consumption,” says Roel Chan in Taglish. Chan is Uy’s cousin and is a partner at God’s Grace Farm and is a co-founder of 365Concepts Inc., the company behind Seven Days of Greens vegetable grocer.

She began container gardening in her backyard, attending classes offered by the Department of Agriculture (DA) and researching online and giving her harvests to friends and family, who suggested that she sell her vegetables instead. When she was given the opportunity to purchase a 3.2 and a 2.8 hectare property in Barlig, she immediately said yes. 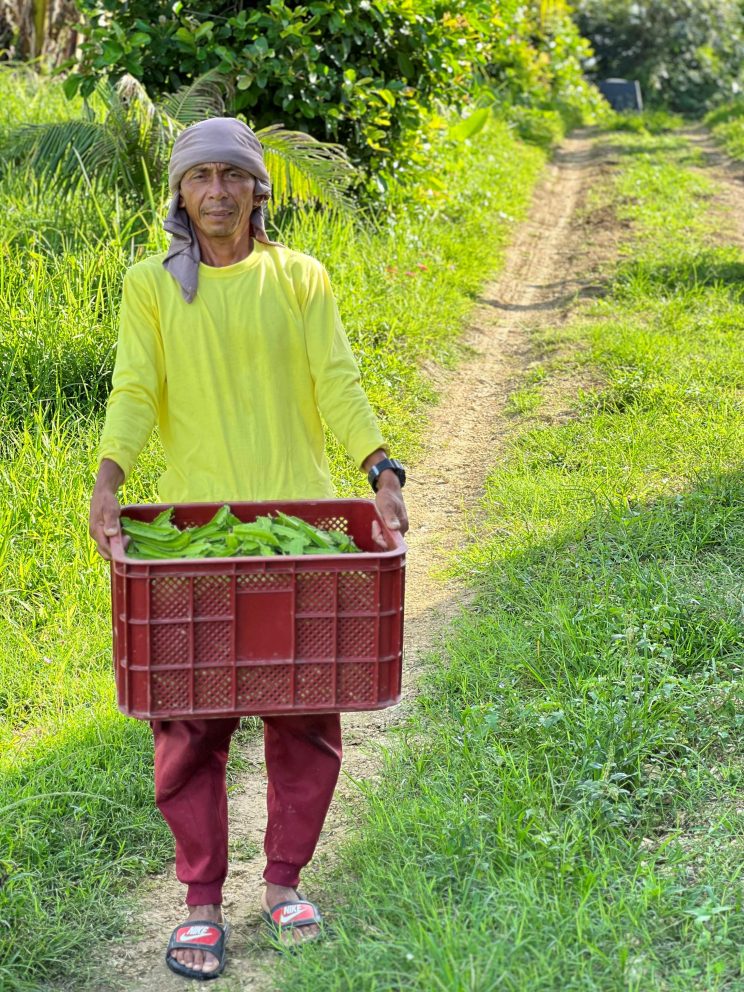 She started with a few salad vegetables that were hard to find in Cebu at the time such as arugula, Japanese mizuna, and Kale. “She envisioned a very unique farm so we had heirloom cherry tomatoes from Japan, we called them Aiko tomatoes,” Chan says. She had her produce certified organic from the start, first by the now discontinued NISARD Certification (NICERT) and now through the Participatory Guarantee System (PGS) and Cebu Organic Association Cooperative (COAC).

In 2015, Uy invited Chan and his wife Vangie to Cebu to see the farm. “…we got encouraged to partner with her and also to open our own store in Malate, Manila [called] Seven Days of Greens (SDG),” Chan says. “My wife was pregnant with our second kid [during that trip]… we named our daughter Aiko, after the [Japanese] tomato variant.” 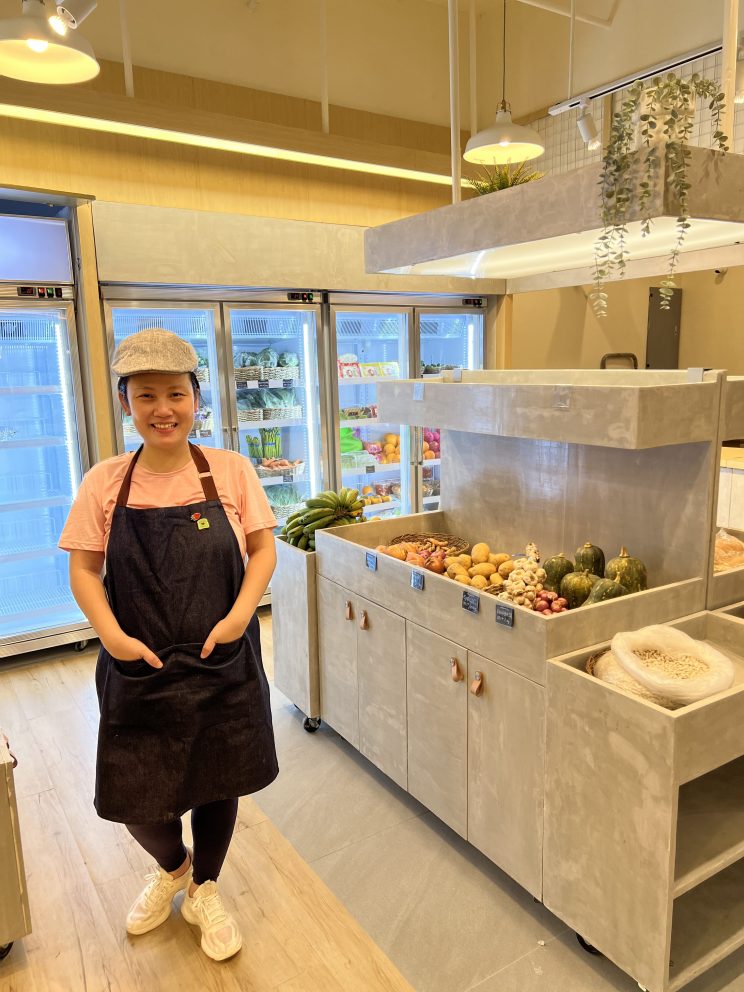 Vangie Chan in front of a kiosk inside Seven Days of Greens. (Roel Chan)

The next year, Uy opened God’s Greens Farm, her first brick and mortar store in Cebu City. “They were the very first store that [mainly] sold organic fresh produce,” Chan says. “There are a lot of organic [lifestyle] stores, but they tend to have a small produce section… This was a fresh grocer.” She later expanded to three locations, which had to close during the pandemic.

The brand became well-known and eventually started appearing in supermarkets as well. Now, produce from God’s Greens Farm can be found in 10 supermarkets in Cebu. 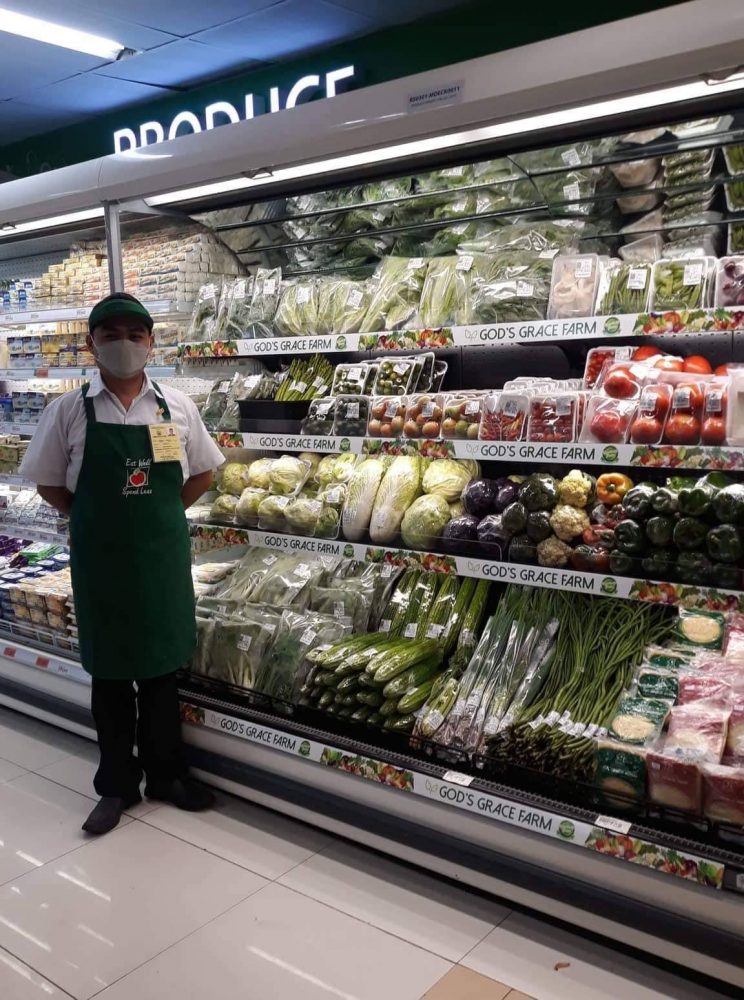 Produce from God’s Grace Farm can be found in about 10 supermarkets in Cebu. (Roel Chan)

That same year, Seven Days of Greens opened its second branch in Eastwood, in Quezon City. The location choices were intentional, with the Malate branch servicing clients from Manila, Pasay, Taguig,  and Makati and the Eastwood branch catering to nearby customers, including the residents of Eastwood City, Corinthian Hills, and Valle Verde.

Using technology with a human touch

God’s Grace Farm, its Cebu retail store God’s Greens Farm, and Manila-based Seven Days of Greens all accept on-site clients, but a chunk of their sales are done online. “When we started, both in Cebu and Manila, … it was scheduling what was about to be harvested, [taking] pre-orders, and delivering them…,” Chan says. “The produce is air-freighted to Manila.”

This was before the days of the now ubiquitous rider apps and online and electronic banking. “We’d ask bank messengers to deliver for us [on the side],” Chan says. “Bank deposits back then really [meant lining up to] make a deposit in the bank. The only thing that existed was Facebook. Messenger didn’t even exist back then, so the only way to order was through SMS or commenting on the [Facebook Page]…  The model hasn’t… changed.”

SDG is also on food delivery apps, “but they contribute very little [to] the business,” Chan says. “…the business… of farm to table is still the relationship with the customer… The advantage that we have is that we’ve been there since 2015, both in Cebu and in Manila… The essentials business is a recurring business, so once a customer likes you, they’ll keep ordering from you and they’ll refer you to other people. So it’s not just our products that are organic, but our relationship with our customers are organically grown as well.”

This process has worked so well for all three brands and their customers that they took their time setting up their own ecommerce store. “That’s in the pipeline, but for a totally different customer,” Chan says. “The goal for our current customer is, aside from planting, growing, [and] harvesting, we’re also selecting [produce] for the customer. We… make that possible using basic technology like Viber and Messenger… Not because they haven’t adapted to technology… it’s just that they need someone to talk to.”

Sometimes they will go as far as weighing the vegetables, then taking and sending a photo to the client for approval before having it delivered. The setup has been especially beneficial to their clients during the pandemic. “We had clients who didn’t know how to shop [for vegetables], so they’d say ‘we need three carrots, two eggplants.’ If it were an ecommerce site, everything would be in grams, and they don’t know how to [shop] in grams, so customers do appreciate [our process] because we are able to talk to them.” 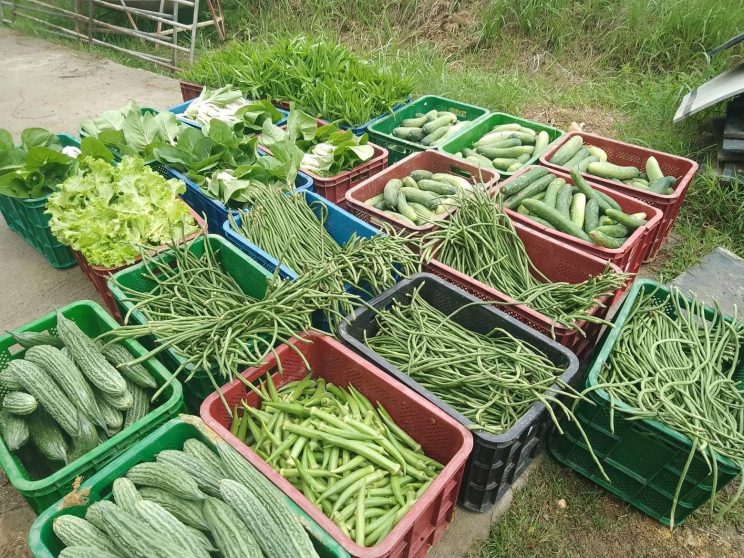 This process also allows them to cater to special requests. During the height of the pandemic, when people were forced to stay indoors, they began offering banana leaves so clients could lay food on them for boodle fights at home. The’re also popular in the Chinese Filipino community because they offer chicken specially prepared for temple offerings. “Through [this] model, we’re able to develop that relationship.”

Now that the farm’s clientele is expanding, God’s Grace Farm will soon be available on ecommerce site Shopify. An app is also in the works. “This is for customers who are in a hurry,” Chan explains.

In line with the farm’s expansion is its increase in offerings. “We have contracted farms in Benguet for highland produce,” Chan says. “We spend for everything, including their certification… and everything they produce, we get….” 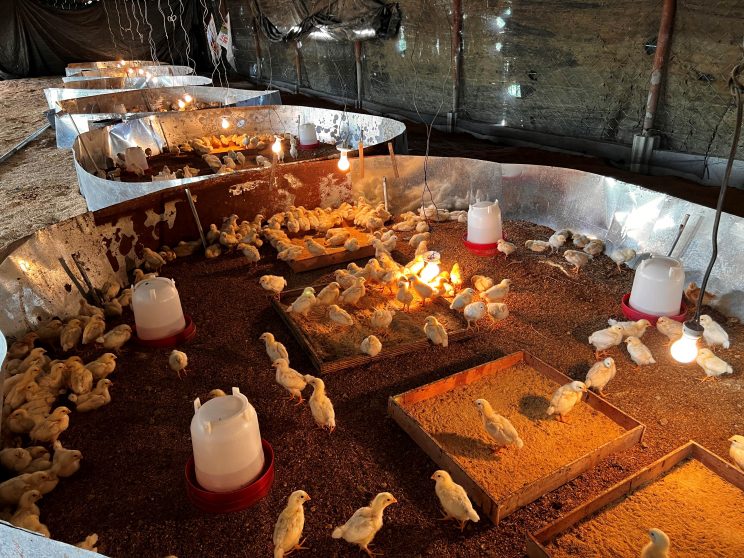 They’ve started raising and offering native chicken, free-range eggs, and pork from native and regular pigs. “But sadly… we’re still recovering from [ Super Typhoon] Odette (whose international name ins Typhoon Rai) [from December 2021],” Chan says. “We were wiped out. We lost our greenhouses, even our livestock, farmhouse, everything. Now we’re recovering… but slowly.” 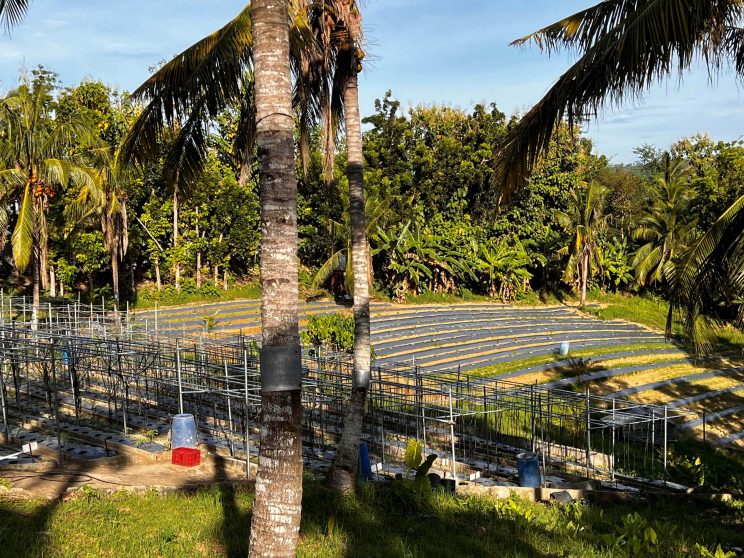 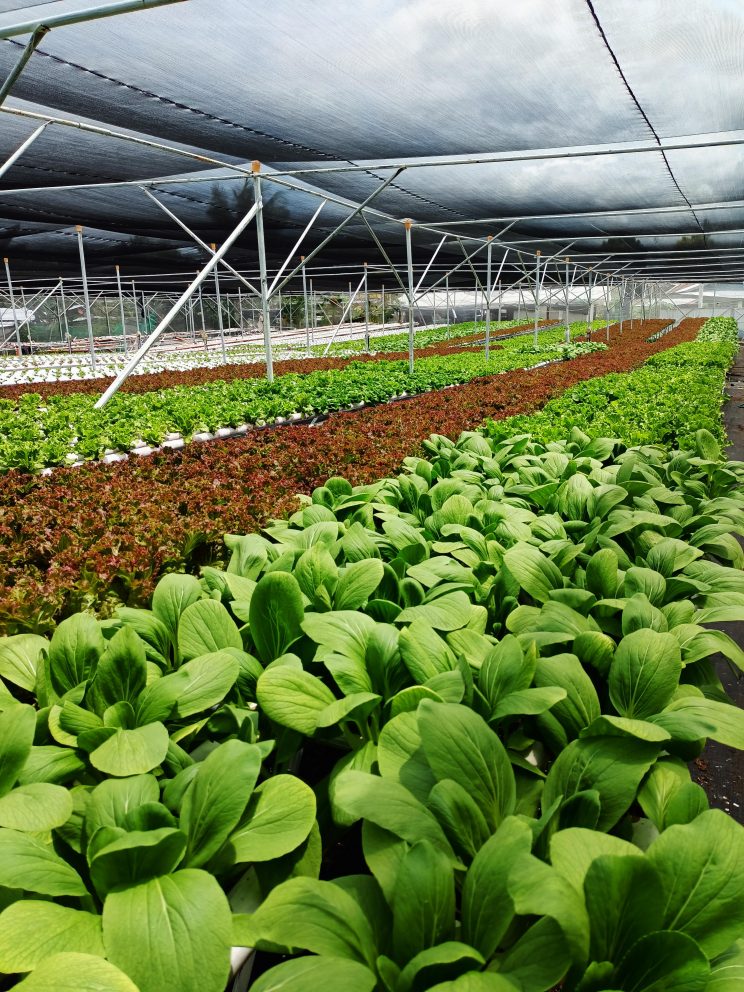 The cousins have established a hydroponics farm in Talisay, Cebu. (Roel Chan)

Chan has also ventured into selling Vannamei shrimp (Litopenaeus vannamei) from General Santos City (GenSan), South Cotabato, known for its seafood industry to Manila restaurants. “ mostly Japanese restaurants, Apartment 1B, Raintree restaurants, and several malls,” he says. “(They can be bought) IQF, individually quick frozen, and of course, (according to) restaurant specs.”

He adds that they also get asparagus from GenSan. “That’s one thing I hope we get to promote: Filipinos don’t eat asparagus, but we are one of the [most significant] exporters of asparagus in the world, and we have beautiful asparagus. They come in different sizes.” 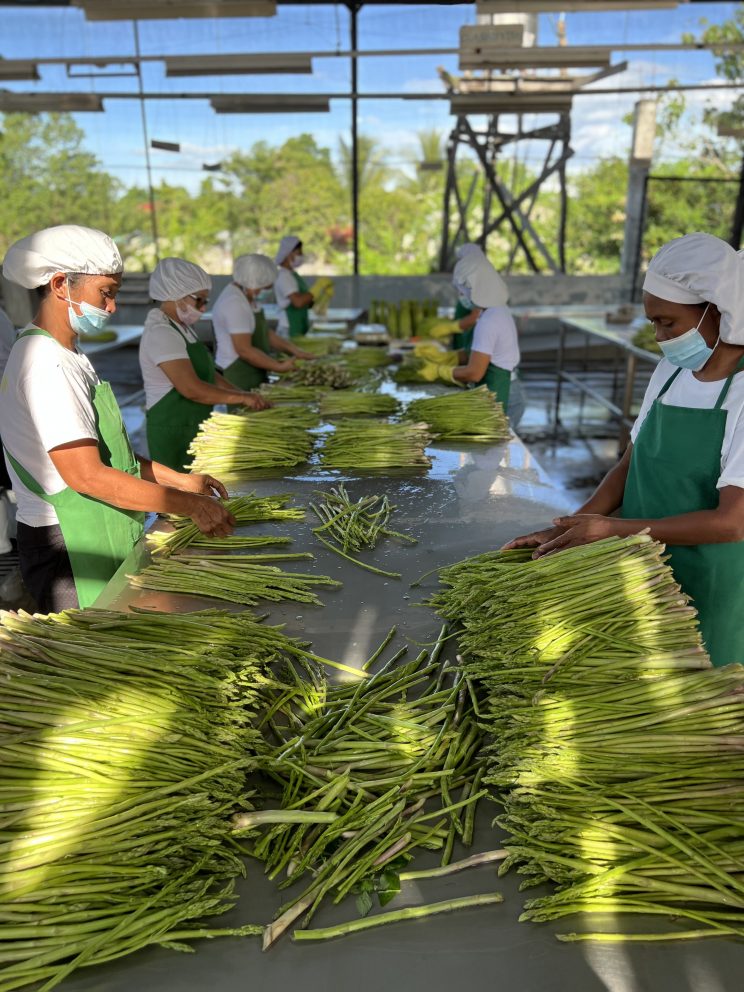 An accidental calling, a good life

When asked about profit, Chan declines to talk numbers, but bases it on scale instead: “Cebu has 60 workers. It has two walk-in freezers and chillers. It has scale. Here in Manila, I have few workers because I don’t plant here, it’s all retail, so I have six workers and two stores,” he says.

“I’d be lying if I said that I wasn’t influenced [by  Jessilyn] because I had never thought about farming,” Chan says. “But because my cousin was doing this and it was the  prospect of having a business, [I became interested]. My dad was also an influence because he has a green thumb.”

Chan’s three children are still young, but Uy’s two kids are a bit older and they’re hoping that they develop an interest either in farming or in adjacent industries like food technology. “…that’s one of the chains in the agri and food business [because] it’s scientific and will elevate the next level of products that can come out of our company,” Chan says.

The cousins have shown that when run like the business that it is, farming can be lucrative. Sometimes, it just takes a person from a marketing background who is willing to continually learn new things to see how it can better reach customers. “I think the potential is there. The foreigners have seen it. We’re not quite there yet,” Chan says. “I take it as an advantage that I come from a different background and have different training. A lot of it is corporate, and I’m trying to apply it now to a legacy industry that I think I can add value to.., but I also think I have to learn the skill set that can add or surpass [what we currently know about] farming.”

Chan’s accidental calling has given him the opportunity to do what he loves: traveling around the country to meet suppliers and clients. “You have to visit [farms] that [cultivates] specific types of produce… I enjoy that. That, for me, is the traveling that I want to do until the day I die.”